We finally got motivated enough to leave our own backyard and go do something else besides stare out across Buzzards Bay. We went to the Scallop Fest, held every September here on Cape Cod, when -- as you can see below -- the tourists are gone and the retired folks come out in droves.

Actually, we're not quite as lazy as I've made out. We did rent bicycles for the week and rode around the neck where our cottage is located; and we took a ride down to Wood's Hole and we biked along the Cape Cod Canal. We also went out to dinner a couple of times and went shopping in Falmouth. And we . . . well, that's about it. Otherwise, we were sitting on our deck, or in our little backyard, doing what we do best: reading and relaxing.

Anyway, we went to Scallop Fest, held this year at the Cape Cod Fairgrounds in Falmouth. (We went last year, too, when it was held in the town of Buzzards Bay, across the Bourne Bridge on the mainland). It's a modest affair, by arts-and-crafts-show standards, but we enjoyed the scallops and the music, and B bought a few little gifts to bring back to her coworkers.

We also purchased a print of a lobster from a place called Fished Impressions which had a kiosk at the fair. The fellow who makes the impressions is a fisherman, an artist, and seems like an all-around good guy.

Then, yesterday, we also drove out to Orleans to participate in the "Celebrate the Waters" festival. However, I was not prepared to take any pictures. The battery has run out on my camera, and I neglected to bring my charger with me.

Does anyone else have problems like this? Maybe it only means that it's almost time to head home.

So I will not be sharing my photos from Orleans. However, while I did not bring my camera to the "Celebrate the Waters" festival, B did bring hers, and she captured a photo of the end-of-summer bonfire out on Nauset Beach. 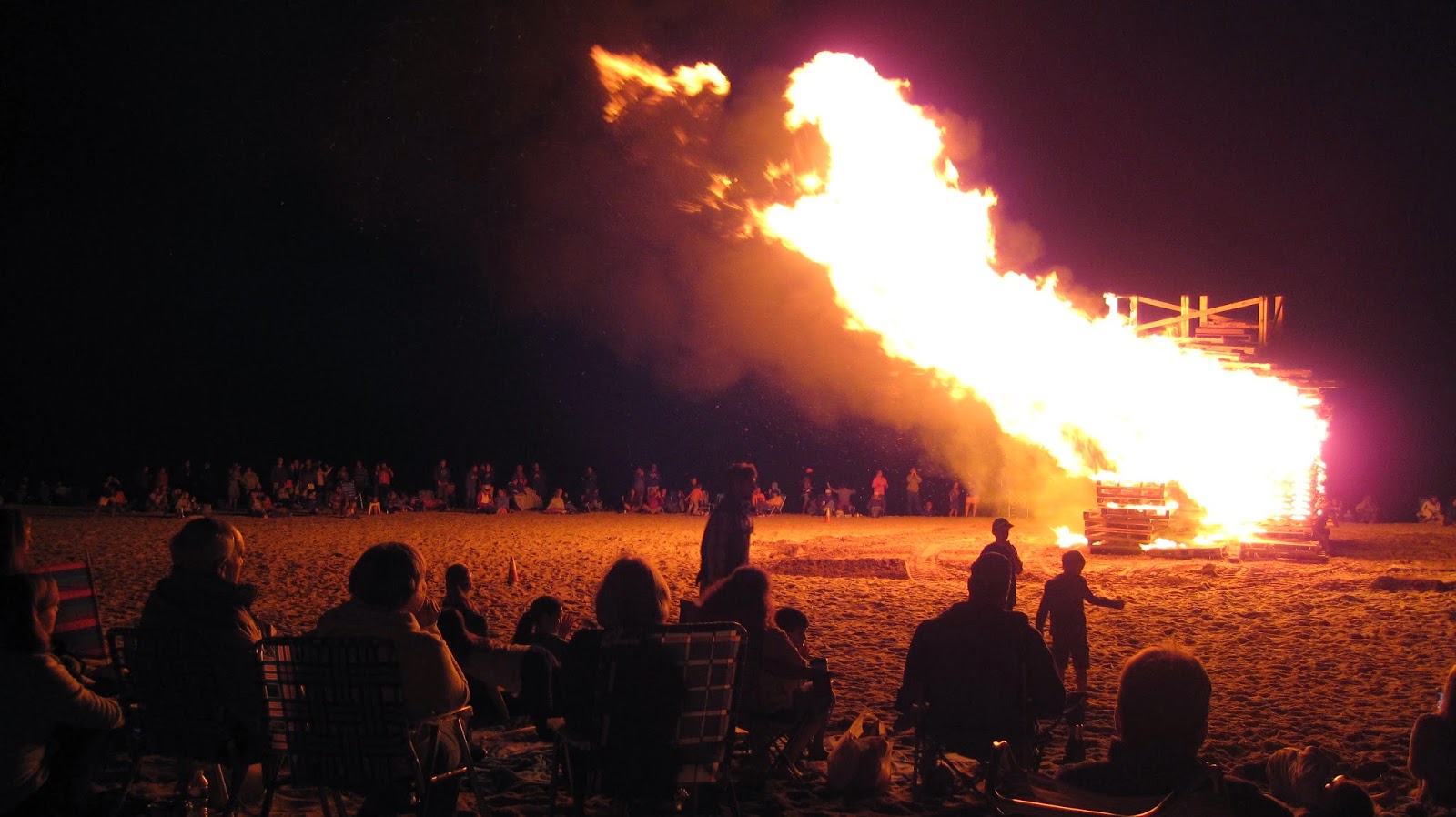 I carry extra batteries for my camera, but I've found that the cellphone camera is a great backup. Nice pictures, Tom. I think you've had a super vacation. :-)

Sounds like you've been pretty active to me. I agree with DJan that the cellphone has become a great asset in regard to photography. Smaller than my big camera and the photos are truly very good.

Been to that area long ago. Enjoyed it.

I have never used my cell phone as a camera, because my Canon is easier to use.

What a perfect time to be on the Cape.

Thanks for the pictures and including us on your vacation.

I like your photos no matter how they come out, I don't own a cell phone and I have been told they take pretty good pictures..I would be at the scallop fest in a new York minute, I adore scallops and love mussels and clams too. We live on the west coast where they are plentiful at the oldtime beaches we go to, we get a license and get them everywhere we cook them at a tiny cabin with kids I knew from grade school with corn on the cob and lots of salads and pies for dessert, I never want to come home to our small town, but must. enjoy your vacation!

My wife takes so many photos that we carry at least two sets of backup rechargeable batteries and a fresh pair of AA Duracells.

She can take 500 pictures in an afternoon, have the batteries die, and because she missed one more sunset shot, the day has been a bust. Now, we never run out. That's my job.

Hard to believe the "retired" people aren't tourists. How do you tell the difference...just curious.

You reminded me how we miss bonfires and music on the beach in Connecticut when our son lived in Mystic and we visited him. Some wonderful experiences available in New England aren't duplicated elsewhere.

We're retired and actually LIVE here (15 yrs now). You can "tell" by all the bikes and canoes strapped to all the cars. Most of the license plates read CT, NY and NJ. My husband asks "Don't they have beaches where THEY live?". LOL. Yes, we look forward to the first week of Sept when it's ours to enjoy again.

Also , the scallop fest was always called the Bourne Scallop Festival. It was held every year in Buzzards Bay , Bourne. Now the name has changed & people have to go over the bridge to go. I went every year & missed it very much , I was 10 minutes from it. A lot of people in Buzzards Bay , including the business's were disappointed.