Yesterday we saw Hammersmith, childhood home of Jacqueline Bouvier Kennedy Onassis -- albeit from a distance, from the water. What we didn't realize was that Hammersmith was on the . . . well, not exactly on the poor side of town, but not on Bellevue Ave., where the biggest, fanciest, most ornate "cottages" were located.

Jacqueline's father, "Black Jack" Bouvier made a lot of money on Wall Street. But he didn't make anywhere near the kind of money that the Vanderbilts had. Cornelius Vanderbilt (1794-1877) made his fortune in steamships and railroads (and donated $1 million to found Vanderbilt University in Nashville, Tenn.), but it was his grandson Cornelius Vanderbilt II who purchased the property in Newport, RI, in 1885 and built The Breakers, a 70-room Italian Renaissance-style palazzo. A number of Vanderbilts (Cornelius Vanderbilt II had seven children) along with many other Who's Who of the 19th century Robber Barons summered on Bellevue Ave., in huge mansions facing out to the sea, the bay and the sound.

By the way, CNN's Anderson Cooper is one of Gloria Vanderbilt's four sons, and a great grandson of Cornelius Vanderbilt II.

Some of the mansions along Belleview Ave. are still privately owned (and I noticed a couple for sale, if you're interested), and some including The Breakers are owned by the Preservation Society of Newport and are open to the public.

We didn't go in any of the mansions. Instead, we walked the three mile cliff path along the back of the properties, which offers great views of the water and occasional sightings of the mansions. Here's The Breakers, the weekend "cottage" of Cornelius Vanderbilt II. 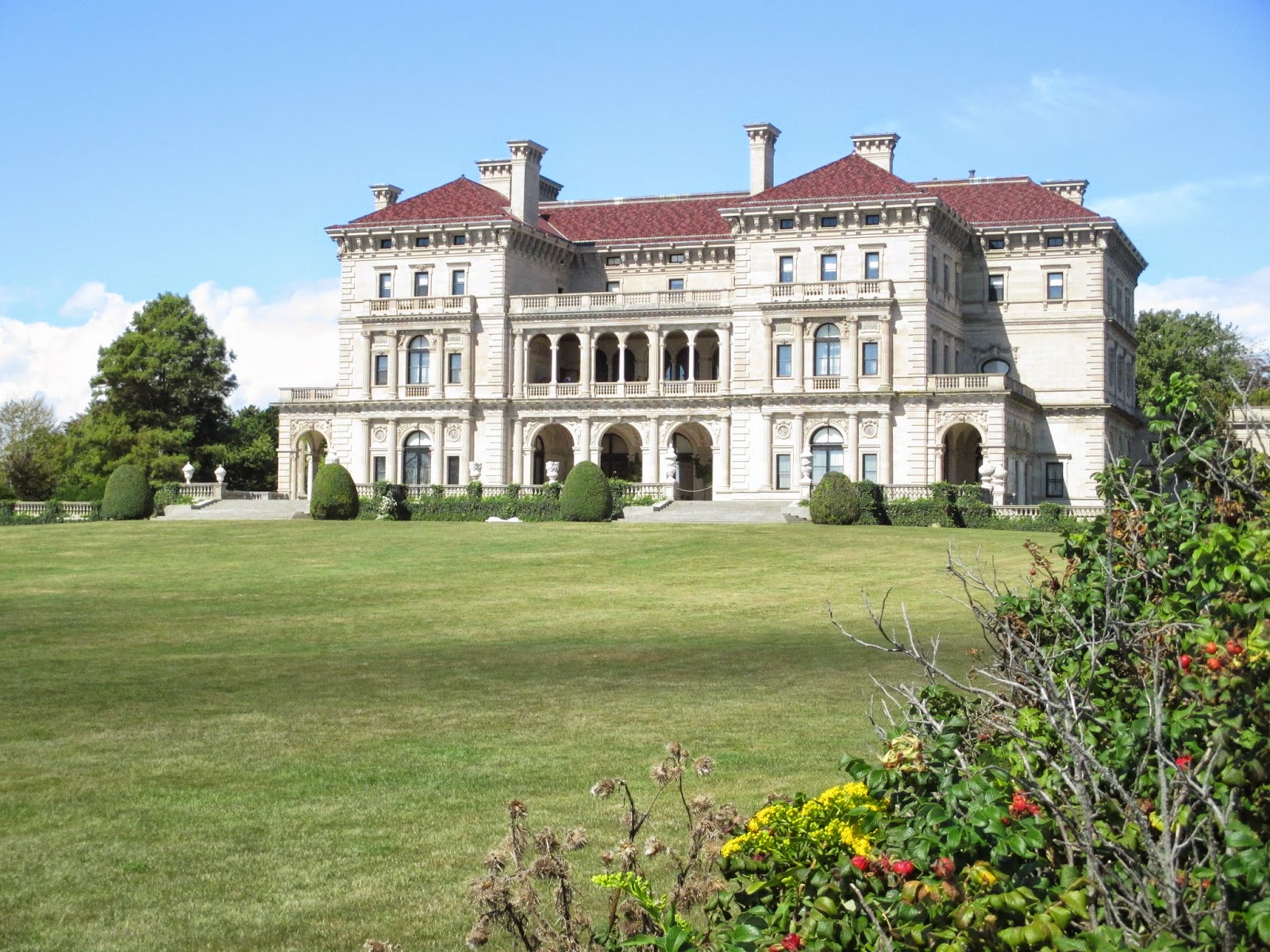 And here's the truly belle view he enjoyed. 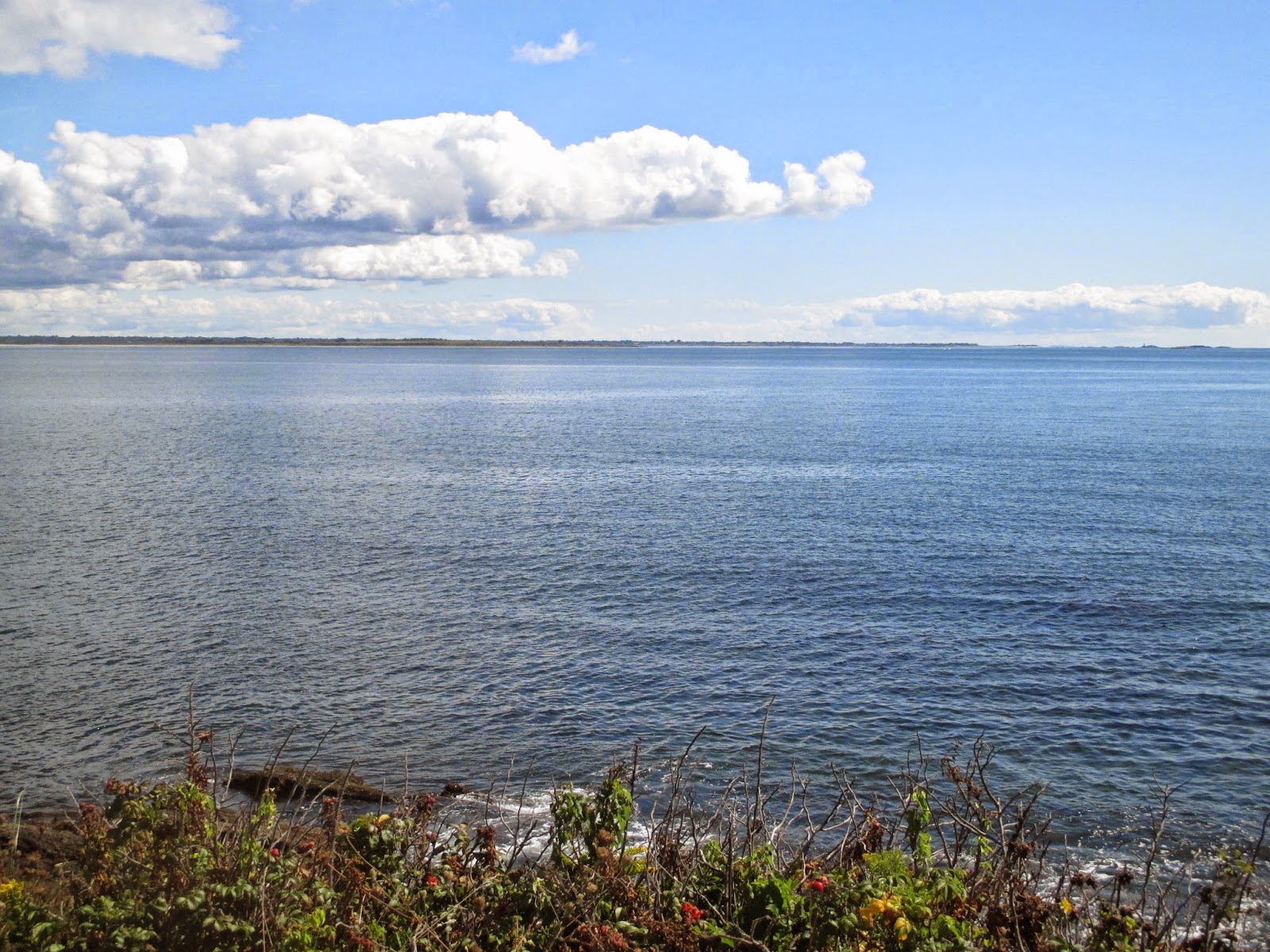 That so-called cottage would be too big and fancy for me to live in. Lol.

I could not imagine cleaning the toilets and bedrooms in those mansions at all..The thing of it is Anderson Cooper works 4 jobs and never slows down, he comes from big big money but one would never know it, he has the work ethic of the late Joan Rivers and the late Robin Willimas had..Why is it in this country that people think they can live without working? I have never understood that at all..One can learn something everyday on a job and I guess most of the baby boomers know and knew that, they are retiring in droves to at least see some of their pension money and social security and savings they scrimped so hard to accumulate and live..My hubs retired a few years back, but I continue to keep busy without pay to keep living fully, he is busier than when he worked 12 hours a day on a real job with real wages his entire life, the big mansions do nothing for me, there are plenty of homes in the county where I live that have 16 bedrooms and 15 bathrooms and I am not impressed at all, someone has to clean them up and I would never want to do that job..I have a teeny tiny home paid for and I clean all the time when I can and we are replacing 36 year old no heating system and it is not cheap, so I say be very happy with enough and happy with anything..gratefulness makes a very happy body, mind and soul!

I did not realize the Bouviers were poor either. Oh, well, I have always felt the key is to enjoy exactly what you have.

Good heavens, that's some "cottage" all right. I love the view, you're right, it's perfect. Somehow it doesn't even appeal to me to have a place like that to summer in. Think of all the laundry! :-)

The rich are different from you and me for sure.

I would happily rewrite my genealogy to be a trust fund baby member of one of those families. I feel quite sure that none of the owners spares a moment's thought for how or when the laundry gets done, or how often the floors are vacuumed. They have people for that. They worry about other things . . . Good Works and Where To Be In Which Season.
I could do that.

I can't imagine what it must have been like to spend a summer in one of these "cottages."

We can dream can't we? Love the view as well. Yes one would have to be very wealthy to be able to maintain a beach house like that.

What a glorious view! I haven't been to Rhode Island and you are piquing my interest in planning a trip.

I spent a weekend in Providence a number of years back and took the tours of several of cottages. Well worth a look.

Speaking of the poor rich, look up 'Grey Gardens', a story of the once-rick fallen on hard times. The story has been told in both a film and a Broadway musical.