I noticed the windmills on Cape Cod. I counted at least a dozen spread out among the trees, behind the small hills. There's plenty of wind on Cape Cod, and so those practical New Englanders have put it to use.

I recall reading a book, Cape Wind by Robert Whitcomb, during one of our previous visits to the Cape. A consortium was proposing to build a wind farm out on Nantucket Sound, maybe 10 or 12 miles offshore. It would have produced almost enough electricity to replace the oil-and-natural-gas-burning facility in Sandwich. 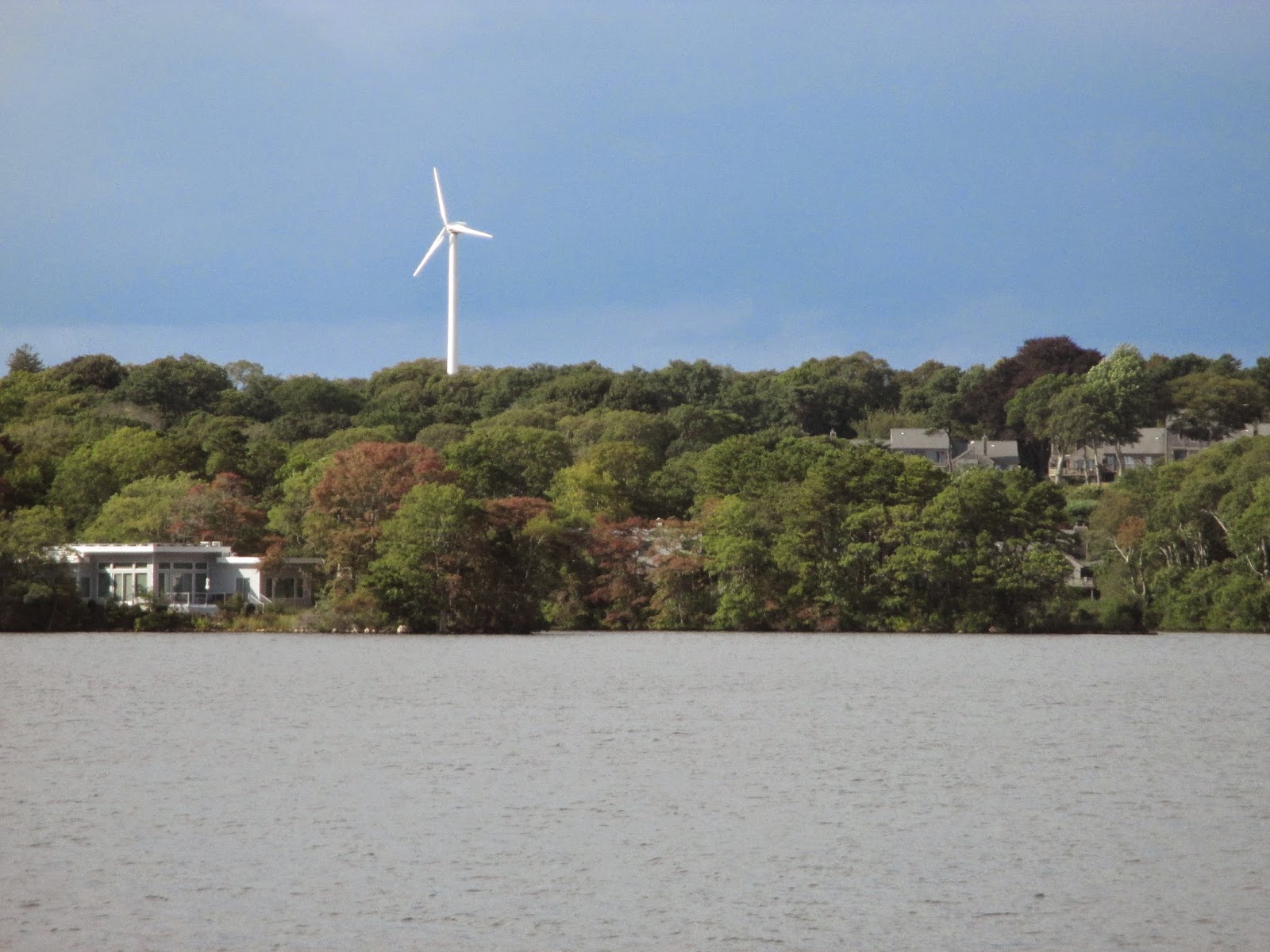 However, the Cape Wind project ran into a lot of opposition. It would interfere with boating traffic; it would endanger migrating birds. But most of all it would spoil the view of waterfront property owners in and around Hyannisport.

One opponent of Cape Wind was Sen. Ted Kennedy, who of course had a family compound in Hyannisport, and counted among his friends many landowners along the coast of Nantucket Sound.

Senator Kennedy eventually met his maker. But the Cape Wind project has not. While there is still no sign of a windmill in Nantucket Sound, apparently plans are still going forward for a wind farm sometime in the future.

Meanwhile, I counted at least a dozen windmills just in my corner of Cape Cod, and there are many more dotting the landscape. So good for the Cape Codders who are progressing along the lines of clean energy, energy independence, and intelligent use of natural resources.

But of course, it's never so simple. Just take a look at the end-of-summer bonfire held every year at Nauset Beach (see the post below). It's a spectacular sight and lot of fun for the kids. But watching all that smoke from the fire I wondered if this alone could cause global warming.

According to a Yahoo news item, reporting on a march in New York City last weekend protesting climate change, global greenhouse gas rose 2.9% in 2013 -- and according to the New York Times, global emissions rose 2.3% to record levels.

I also noticed a conflicted attitude toward automobiles on the Cape. I saw many a Toyota Prius (50 mpg) and Honda Insight (40+ mpg) on the streets of Falmouth, along with other smaller cars that probably get 30 mpg. But there were also plenty of Jeeps (20 mpg), Chevy Tahoes (18 mpg), and Ford Expeditions (16 mpg).

In other words, a lot of Cape Codders choose to ignore any warnings about air pollution or global warming, and seem unconcerned that we import a lot of our gasoline from the war-torn Middle East, where more than 4500 American soldiers have been killed in Iraq alone. (Do you really believe we'd be sending troop to the Middle East if there was no oil there?)

I figure, if you drive an SUV, you're kind of a libertarian Republican like Rand Paul, who believes that people should be able to do what they want, without any restrictions on their freedom, despite any consequences to others, and as long as they can afford it.

But as I found out on the highway on the way home, everybody from libertarians to socialists agrees on one thing. They want to go 70 mph, not 55 mph, and they don't care that it burns up more gas that way. A typical car engine is most efficient at around 50 or 55 mph. If you get 30 mpg at 55 mph, you will be getting about 25 mpg at 70 mph.

I know, I know, you're in a hurry. And gas in not that expensive. And what difference does one car make? But according to mpg for speed, if the national speed limit were set to 55 (as it was in the 1970s) it would save 1 billion gallons of oil per year.

It's a complicated process. Convenience often wins out over conscience. But as illustrated by Cape Cod, we keep trying.

The premium seems high for life insurance over 60. I am not getting a good policy although I am looking regularly. Feeling sad.

Seems we've always had concerned and unconcerned citizens (look at the voting statistics). However, as Mom used to say, "You don't have to do what those other kids are doing. Do the right thing."

I think life is a balancing act and it's the overall behavior that counts. I drive a mid-sized SUV and never will go back again-once you have a bad knee and have a car at butt level, you realize not all is bad. I also drive fast.

One the other hand I use cloth napkins, don't buy paper towels, recycle, use barely any air conditioner, use only cloth shopping bags, and would have no problem with a wind farm. I actually think they are pretty.

Germany is probably the most environmentally friendly Euro (maybe even world) country. You cannot wash your car in the driveway, only in a car wash with special drains. A tree ct down has to be replanted. Downtown centers are walking streets, they have steam radiators (cant begin to tell you how much I miss radiant heat) They also make REALLY fast cars and have no speed limit, lol.

We recycle and compost. We drive a Prius. We maintain small wardrobes. We don't own an air conditioner and never turn on the one in the car. We keep our thermostat at 68.

But we travel sometimes by air and we don't pay extra to compensate for our carbon footprint.

I think wind farms are pretty, too. Even if they kill birds.

In time those windmills will look quaint and picturesque, like the mills in Rembrandt paintings. I doubt people complained in seventeenth century Holland that they were an eyesore.

Ted Kennedy was lauded by many, but I could not stand his hypocrisy. His objection to the offshore wind farm is one example. He got away with murder too. Some liberals are so hypocritical about energy issues. They really think wind and sun can replace fossil fuels...including clean natural gas obtained via frackin. It can't.

This does not mean I object to windmills. As a child, I lived on a farm whose energy was generated by a wind mill. Of course in those days we lived in the Midwest where the wind comes whistling down the plains. Along with tornadoes.

We certainly are conflicted aren't we?

Oh brother, not looking forward to 60 plus if it leads to this type of senility, if you like wind power and you want to drive a Prius, more power to you, it just means that it leaves more gas/hydrocarbon energy for those of us who haven't bought in to the man made "climate change" nonsense (one volcanic eruption releases more climate change gases into the atmosphere than years of man made pollution) but oh well, if it gives you some purpose in your life then I guess it's ok!

Conflicted is my constant state lately--energy, politics, economy, health care. It is just too darn hard to do the right thing because nothing is completely right.

I agree with you.

They have those windmills in Rhode Island also (sister state to MA). No one told the state that when those windmills break down, it costs over $500,000 to repair them. So, guess what? RI has lots of broken down windmills that no longer work because the state does not have the money to repair them.
What a joke!
I'm not conflicted. Until China and India cut down on their emissions and pollutions, everyone else is just blowing hot air up the you-know-what. Remember the Olympics in China? The pollution was so thick you couldn't even see the games, swim in the waters or walk in the towns.
Give me a break!

Thank you for your glimpses into a post-peak vacation on Cape Cod. What an inspirational time of the year to road trip in New England. It has been 40 years since I visited Hyannisport and any post-peak vacation appeals to me. Those windmills are plentiful along the Columbia River in the vicinity of Vantage, WA. Every time I drive east on I-90 I think how the windmills fit their sagebrush landscape nicely. Certain you are with your observations of driving 70+ mph on interstates and turnpikes. Cannot be folks are always late, or behind schedule, to be somewhere. Seems fuel is plentiful, the vehicles have the power and it is merely a matter of stopping briefly to fill up to hit the 70+ mph ranges again. During road trips and any time on the interstates, with my cruise control assist I keep it at 60 and an occasional 65, for overtaking purposes. The rewards being I get more mpg per tank full and it is a reasonable speed to anticipate, and defensively react to, adverse situations. I have the safety of traveling the lane the big rigs use because their posted speed limit is 10 mph less. I like the convenience of my own vehicle and I like consciously taking steps to minimize the costs of that convenience, at least where they are still mine to control.

Restricting the speed limit made some sense in the 70's when cars were less efficient and designed to be closer to optimal efficiency at around 55 MPH but modern vehicles are better. So, it would accomplish little to restrict the speed limit today. I tried, back in the 70's, to see how much it mattered on a drive to Los Angeles from San Diego. It took longer and I was much more tired from the trip at 55 MPH. The difference in gas mileage was negligible also (to be fair, I was driving a Chevy Vega at the time)... the difference was maybe 1 MPG better. I wonder how many of those people in those marches in NYC and elsewhere traveled by gas hogs or jet to get to those protests?

I wonder if windmills could be painted to look like trees. Brown towers, green blades. Im wondering if they would appear to be less intrusive. I pass by a plant that makes them and its row after row of white blades. Im sure the wind would just think the mill is just another tree.