"Change is never a smooth curve, it comes in leaps and jolts, plateaus and remissions." -- Alexandra Andrews, "Who Is Maud Dixon?"

What's Life All About?


I just finished reading a novel called Night Film by Marisha Pessl. What I didn't realize when I started the book is that it's a perfect story for Halloween.

I won't trouble you with a review or plot summary, except to say the story stars an investigative reporter Scott McGrath, who goes in search of the secretive movie director Stanislas Cordova. The elusive director is celebrated for his artistry and brutal honesty. But he has also produced such awful and terror-filled films that regular movie houses have stopped showing them. Now people can only view Cordova movies by special invitation to clandestine underground locations. 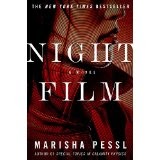 McGrath's search touches tangentially on the black arts and magic potions, and includes visits to a ramshackle tenement building, a spooky mental institution and a secret gathering in the dark of night at a remote castle far down a deserted, windy beach.

At one point McGrath breaks in to Cordova's private compound in upstate New York, called The Peak, where he is trapped in a maze of underground tunnels. The only light he has to guide him comes from his book of matches. He strikes a match every few minutes, carefully rationing the matches so he doesn't run out and get left in complete darkness. He stumbles through the black catacomb, feeling his way along the wet, slimy stone walls. His foot bumps into something. A body? A pile of bones? He strikes a match to see. It's a discarded dress, which he bunches into his backpack. Then he accidentally drops his book of matches. He feels around frantically on the dirt floor. Nothing. He cannot find them.

Now it's totally dark, as the walls close in, and he searches blindly for a way out . . .

It's a long, rambling novel with many twists and turns -- you'll tire of the story if you're not ready to spend a considerable amount of time searching through the torturous and tangled web of another world. But it's a great read if you like that sort of thing.

The final pages bring us an interview with the mysterious director. Cordova tells us, "Our lives are flowers that bloom brightly, and then they are gone." And this is what he says, just before he excuses himself to step outside for a moment . . . and then disappears:

"My films are just stories. But that is all
we have. The stories we tell others and the
stories we tell ourselves. When you talk to
the elderly, men and women at the end of their
lives, you see that's what's left behind as the
body disintegrates. Our stories. Our children
will decide whether or not to keep telling them."

I just put a hold on it at the library. I'll let you know. Thanks for the recommendation. :-)

I think I would run out of patience before I ran out of book, but I can certainly agree with Cordova's words.

There seems to be so many good books out there; I wish I had more time to read.