As I mentioned a couple of posts ago, Rebecca Mead at The New Yorker recently took a jaundiced look at the concept of The Bucket List, occasioned by a stopover that President Obama made at Stonehenge on his last trip to England. Obama looked over the monolith, then quipped that he'd "knocked it off the bucket list," before hopping back on Air Force One to jet back to Washington.

I myself have not made a Bucket List. The idea seems a little ghoulish to me. But last year B brought home a book called The 100 Best Vacations to Enrich Your Life by Pam Grout. The two of us leafed through the book, but to be honest, we didn't both choose a lot of the same experiences. 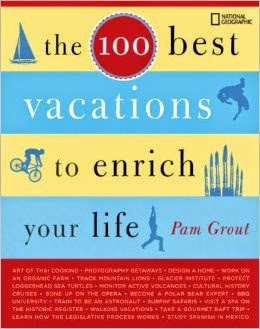 So, for example, she wants to "Take a Gourmet Raft Trip Down the Rio Grande" (p. 262); while I thought it might be fun to "Protect Loggerhead Sea Turtles" (p. 134) at the Wassaw National Wildlife Reserve in Georgia. (The book is a few years old, so you have to google the listings to make sure the information is up-to-date.)

However, we were both intrigued by one suggestion. And that's how we ended up going to "Sit at the Feet of the Masters" (p. 172) at the Chautauqua Institution in Chautauqua, NY, this past summer.

I don't know what we'll do next. I'd like to "Tour History in a Covered Wagon" (p. 207) on an Oregon Trail wagon train. But she found a candidate for a different kind of whistlestop: "Tour the Canadian Maritimes Aboard a Luxury Train" (p. 177).

Meantime, I'm beginning to plan my annual search to find a bit of sunshine in January, and so I started researching some other options on Road Scholar. You see, I have a problem. I've been going to Florida for three weeks every year since I left work in 2002. The problem is:  B is still working, which cuts into our vacation time dramatically. And also . . . B hates Florida. She thinks it's too crowded and too cold.

The one time I got her to go with me, a week in Naples, there was a cold snap. We only got to the beach one day, and even then I will admit it was chilly, and the rest of the time we needed at least a windbreaker, if not more.

"But isn't it better to have 60 degrees in Florida, instead of 20 degrees at home?" I asked.

"Not if I'm still cold," she replied.

So anyway, this year as usual, I'll be going to Florida by myself. I spend a couple of days with my sister, who lives in Jacksonville. And then, let's see. There's a Road Scholar tour of historic St. Augustine, Florida, and another that offers a journey through the Everglades. I've never been on a Road Scholar excursion, so I don't know what to expect.

I'll be by myself. Will everybody else be a couple? I'm in my 60s. Will everyone else be ten years older than I am? I like to do things, not walk around and look at things. Will I be spending too many hours riding on a bus and walking around a museum? Will I be required to stay with a group that eats dinner at 5:15 p.m. and gets shepherded around all day like a bunch of sheep?

I guess those are the questions anyone asks when they try something new. So now I'm sure you understand . . . it would make things a lot easier if B wasn't still tied down to a job. (And if she liked Florida.)

But anyway, in other respects we are beginning to focus in on some of the same things. We both are interested in "Reaching for the Stars" (p. 170) at the University of Arizona's Astronomy Camp. Maybe next year.

Never heard of the book, but will get a copy...We completed two Road Scholar activity programs - cross country skiing in Vermont and kayaking in Virginia. Age range 60s+, most early 70s (I bet the tour-only, less active trips skew older)...We are not Florida fans, but my son now lives there. We will be down in January and might do the Everglades biking trip. You will have a great time whatever you decide to do, so go for it!

I spent a few days in Orlando, Florida in January 1975 and it was in the low 60s during the day. I remember jumping into the pool and jumping right out because it was so cold. Lol.

Last August, I spent a few days in Miami. It was more pleasant.

Here in Hawaii, the temperature can dip into the 50s in January. I consider it to be the coldest month here, and September the hottest.

I actually mainly agree with b to a point. If its thirty five or forty here and a high of sixty in Dallas....now Houston in Christmas will be different. Im looking at Road Scholar for the spring so I'll be interested in your review, especially
The single aspect.

I say, travel and do whatever is new and appealing, as long as health and money are good. You'll never have a better time to enjoy yourself.

I got traveling out of my system when I was younger. Glad I did. Have a trip planned for a week from now and feel ambivalent about it. I keep telling myself, it's not apprehension you feel, it's excitement... Yeah right.

Nope. Not for long.

B should seriously reconsider.

My wife still works but fortunately her job doesn't interfer with our traveling. Our bucket list is getting smaller and smaller but there are a few more places we'd like to see.

My sister lives in Florida and I really enjoy visiting here when the weather is at its worst here in the Pacific Northwest. I can relate. :-)

I have just decided that if I am part of a couple I will be sure to talk to the single guy or gal!