How Do You Talk to Your Children?

B has dutiful children. Her two sons call her on the phone about once a week. Her older son lives some 60 miles away, in his own apartment, and he will call when he gets home from work if he's not doing anything with his girlfriend. We also see him once or twice a month. In fact, we drove down to have dinner with him and his girlfriend over the weekend.

Her younger son lives more like 800 miles away, in South Carolina with his fiancee. He also calls his mom once a week, usually on his way home from work -- yes, he has a hands-free phone -- although we obviously don't get to see him as much. He was home for a long weekend last Christmas; and B flew down to see him over the summer. He and his fiancee are planning another trip home around Thanksgiving.

So that's how B talks to her children, mostly by voice, over the phone, and occasionally in person. Kind of the old-fashioned way. In fact, she was thrilled when she found out her older son did something almost unheard of among the 20-something crowd -- he installed a land-line telephone in his new apartment!

Maybe the way you communicate with your children changes once you have grandchildren. But for us, we're not there yet. And I wonder if we're at all typical; or if we're missing out somehow. 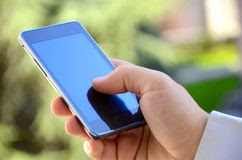 As for my daughter, she will not pick up the phone. She simply does not use the phone for voice communication. She communicates by messaging. If I call her, she never answers. If I leave her a voice-mail message, she will not respond. And she never calls me. But she will message me; and she will respond to a message. That's just the way she communicates, and I've found that I just had to adapt.

My daughter lives almost 400 miles away. We see her a couple of times a year -- largely (I think) because despite the fact that she's crossed the 30-year-old threshold, she's still living an itinerant lifestyle and is storing most of her worldly possessions in our basement. She stops off a couple of times a year to drop something off, or pick something up. Although this past weekend I met up with a friend of hers whose family lives near us, and the friend was home for the long Columbus Day weekend. We met at the mall, and I gave her my daughter's snowboard, and some winter clothes, to take up to her. That's how I "communicated" with my daughter this past weekend.

But honestly, my daughter is better at visiting me than I am at visiting her. But she's living in Buffalo -- which means the visiting season is short. We drove up there in August, which was my first-ever visit to Buffalo and Niagara Falls, and I did enjoy the trip. But I won't be venturing up there again until after the snow stops flying -- sometime after mid-May.

My son, who lives in New York City, will not answer the phone either. But he uses aol instant message at work. I can never reach him on a weekend. But during the week when he's at work, he's on AIM, and he almost always answers me. That's good, because I feel like he's available pretty much whenever I want to talk to him (you know, as long as it's not a weekend).

My son occasionally comes to visit -- usually when he travels home to see a friend -- and he'll often stay with us overnight. But even then he doesn't really talk to me. The exception -- when I drive him back to the train station. Do you remember those days, when your kids were young, and the best time to talk to them was when you were alone in the car, driving them to soccer practice or piano lessons?

Well, for me, it's still true. The car is dark; you don't have to look at the other person. There are no distractions; and you can't walk away. The perfect time and place to find out what's really going on in your kid's life.

Email ThisBlogThis!Share to TwitterShare to FacebookShare to Pinterest
Labels: Children

I contact my two adult daughters via telephone and email. The older one with a husband and 2 kids lives a few miles from us. The younger one lives in Nevada, attending grad school, and visits us several times a year, staying in her old bedroom.

I make it a point to see my daughters (and grand daughter)at least once a month. I text my children almost every day to tell them I love them. I've been doing that ever since 9/11/01. Both my girls were in NYC when the towers were struck. I can never be certain ever again if we will see/talk to each other sometimes, the very next day.
I also FaceTime (Skype for the PCs) with my daughters once per week. It is a big help in staying connected to them and watching my grand daughter grow.
We're all part of Facebook so I can keep in touch that way too, as well as with their twitter accounts, blogs, flickr and instagram. Anytime my granddaughter takes a new step (last night she rode a tricycle for the first time) I often get a video of the event!
Call it anything you'd like to (too excessive, etc) but I made a vow to keep in touch with my kids since 9/11 and I won't be forgetting that promise anytime soon.
Children are a blessing, regardless of their ages. Time with them is precious. Don't let the sun set on your children in anger. Because you just never know.

Hi, We live in the suburbs of Buffalo, and my mom rarely flys in for a visit after Thanksgiving. Then April rolls around and she visits again. I usually do the reverse; fly to see her during the winter months.
I have 3 sons, 22-30. The youngest graduated last spring, and works locally. He couldn't wait to move into his own apartment. Still comes home weekly with laundry (I love it).
The oldests is in Manhattan, and we call him. He still uses a phone, in fact, he prefers it.
Now the middle son. Oh....he just left NY to move to LA. I flew out there 10 days later. Poor communicator. Uses texting, maybe a phone call every 3 weeks. Usually does not respond to phone or text if he is not in mood. And he has a chronic condition, which makes it that much worse. I am always worrying. You are not alone my friend!

I think you are very fortunate to have such a close relationship with your kids, Tom. Even when my son was alive, we only spoke twice a year on the phone, and that was before Facebook and twitter.It would have been such a wonderful thing to visit through Skype, too. I'm glad for you. :-)

I have two daughters, both live in the east (Toronto) while I live on the west coast. They both talk with me once a week via phone. Sometimes send a text or email with photos between talks. My oldest daughter flys out every Christmas and during summer. Youngest has two little ones and finds it difficult to get home. Unfortunately I am not able to get out there often. It is hard, not being able to see them often, but that is our world today.

My daughters are bad about answering the phone (they usually have the sound off). Texting works sometimes.

I speak with my daughter and oldest son monthly. We text or email in-between times. I also exchange messages and phone calls with my DIL. I seldom speak with my youngest son any more, although he used to call weekly.

My oldest son flies East about once a year, and I fly West every couple of years. I am visiting them again in two weeks. (CA)

I see my daughter every couple of weeks when she drives to NOVA.

I interact with grandchildren via Facebook, email or phone calls. The youngest visits me several times a year. These Kids are all grown and lead busy lives with jobs, school. Etc.

It's hard to read about a family that communicates weekly and compare it with your reality. I practice gratefulness. They are all employed. Not on drugs or in jail. I at least have their cell phone numbers even though some don't respond. I also have the numbers of their close friends or spouses, so if it's a real emergency they will at least answer a call from them.
The worst you can do is blame it on bad parenting. So what if you didn't get a "Leave it to Beaver" family. There are rich rewards in a "Modern Family". They are sometimes harder to find.

Our only talks to me and her daddy about every other day, she uses her phone for her film job and is busy busy and more busy..She is flying out for a wedding reception after her 37th birthday, we will go by Amtrak to see her and enjoy the stay in Seattle, she loves to go to Seattle where she lived but we don't like to drive in that city, taxis and public transportation is great and cheap up there..We know what she is up to..we know a lot of people in our neighborhood and if she doesn't hear from us she phones the neighbors they come by and we call her immediately..she is our only child and we are fortunately close to her, why not I was nearly 30 when we had her and her dad had just turned 30 and we were happy to get the principia PRINCESS she has been our joy and love ever ever since, we feel she is our happiness..we even take little vacations with her and do stuff we feel blessed!!!!!!!!!!!!!

Our daughter is living in Japan and we Skype once a week, exchange Tweets daily and both have Blogs we share, some Facebooking too. She'll be home for Christmas and then back to Japan.

I love that I have grown children and young grandchildren . Communication in our world really has changed.
I like what one woman said in our group once when people were complaining about how seldom they hear or see their grown kids. "For goodness sakes!" she said. "Shut up! When the pioneers came west, some from foreign lands, their parents might never hear from them again! At least we can call them or have the police look for them. We are blessed and I am tired of hearing you all whine."
Well, she has a point, but it also points out how common is the gap.

My daughter, presently on maternity leave, writes her father and I every morning from work. Right now we are getting texts. (Right now we are more that usually involved). My son and his wife both text me (my son in law will, but it's rare). While we are in contact several times a week, I hear their voices at least once a week. Daughter is an hour away and son is 20 minutes away, but they still have their own lives.

My wife and son both work at our local police Department and see each other daily, and he comes to dinner once a week. But he's 34 and thinking about moving to Colorado and this is freaking out his mother.

Under normal circumstances, if I have contact with my two kids once a month, I thing that is fine. My son is currently living with me, but he is a good housemate--often say I wish he were so easy to live with when he was a teenager.