His name was William Henry Pratt. He was born in London, the ninth child of a well-off English family. He went to local schools and attended King's College London, studying to go into the consular service like his older brothers, who all became distinguished members of the British foreign service.

But William was the black sheep of the family. He was bowlegged, and stuttered as a child, and had a lisp. He dropped out of school and went to work as a farm laborer. Then at age 20, he up and left for Canada.

Sometime around then he caught the acting bug, and he appeared in several stage shows around Canada. He made his way to Hollywood where he found work acting in silent films and film serials. But the movie business was pretty tough, even back then in the 1920s, and he had to support himself by digging ditches and unloading trucks.

Around the time he landed in California he changed his name -- in part to seem more exotic, and in part to protect the reputation of his family back in England. He had, after all, become an actor. Nobody knows where his new name came from -- perhaps from a novel with a character called the Prince of Karlova. The actor himself claimed his stage name was actually a family name from one of his ancestors who hailed from Eastern Europe. But his only daughter didn't believe it.

He slowly built up a reputation as a competent actor, specializing in playing the villain in his early movies (he made well over a hundred films in all). He appeared in two hit films of the time: a 1930 prison drama called The Criminal Code, and a 1931 movie Five Star Final, in which he played an unethical newspaper reporter.

But it was another 1931 film, based on an old novel by Mary Shelley, that made him famous. The mad scientist was played by fellow English actor Colin Clive. The hunchback assistant was portrayed by American actor Dwight Frye (who was also Renfield in Dracula). And the monster himself was played by William H. Pratt, better known as Boris Karloff, who wore a bulky costume with four-inch platform boots, and plenty of makeup.

Karloff appeared in other movies as well -- Scarface, The Lost Patrol, The Raven, The Body Snatcher, The Tower of London. And in the 1960s he narrated a TV special of The Grinch Who Stole Christmas. But he remained best known for his horror films and particularly for his role in Frankenstein.

Karloff was famous for playing sinister characters in the movies, but in real life he supported many charities, and every year he dressed up as Father Christmas and handed out toys to disabled kids. He was married five times, and had the one daughter by his fourth wife. He spent most of his life in America but never became a citizen. He returned to England in his final years and remained a British subject up until his death in 1969. He also never officially changed his name. All his life, on legal documents, he would sign his name "William H. Pratt, aka Boris Karloff." 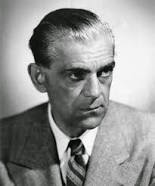 Boris Karloff followed in a rich Hollywood tradition started by Lon Chaney, who gained fame in 1923 as the tortured Quasimodo in The Hunchback of Notre Dame and also played the phantom in Phantom of the Opera. His son, Lon Chaney, Jr., followed in his father's footsteps, playing in The Mummy, The Wolf Man (and also portraying Lennie Small in the 1939 movie version of John Steinbeck's Of Mice and Men).

Then there was Bela Lugosi, famous for Dracula, who also appeared with Karloff in The Raven and Son of Frankenstein. The horror hall of fame also includes Vincent Price (The Pit and the Pendulum and The House of Usher); Peter Lorre (The Raven and Beast with Five Fingers); Claude Rains (Invisible Man and The Clairvoyant).

Most of these old films have been updated and remade over the years. And we, in our contemporary movies, have our own monsters -- vampires, zombies and all those computer-generated ogres that crash across the screen. We also have other modern monsters, like Jack Nicholson in The Shining, or Anthony Hopkins as Dr. Hannibal Lector. Or maybe our latest monster is The Ebola Virus.

But they're not quite the same, are they?

Happy Halloween!
Posted by Tom at 9:18 AM

Ha ha. Yes Ebola is a monster. Perhaps this situation is improving, however. As for Boris, I remember him well. Happy Halloween, or El Dia de la Muerte...a big deal here in California.

What a great tribute to an actor that understood spooky.

Such a Halloween gift: Boris, the quintessential scary guy! :-)

I did not realize that wasn't his real name! He was a classic, that's for sure!

I had no idea who William H. Pratt was! There are none like these classic actors who could make sinister and spooky so real.

Thanks for increasing my knowledge about this splendid actor. Take care.

I'm pleased that you reminded me of him!
I remember watching him in the late movies when I was a kid. "Spooky" is a lot more fun than out and out SCARY.

My husband loves classic monster movies, and we own several, including Karloff in Frankenstein. I prefer these to the high tech thrillers. I learned new things about Karloff. Thanks.