People have been talking about gun control, and how we treat the mentally ill, ever since last Friday when the Newtown shootings took place. I've seen various comments in the media and postings on Facebook like the ones below.

The Newtown wound is still very raw -- the first funerals were held yesterday. Nevertheless, I think we should keep the conversation going about how to stop these killers. And before we all get too depressed, we should also keep things in perspective.

And we also have to remember that mass killings have a long tradition in this country. Don't you remember Charles Whitman picking off students from the observation deck of the main building at the University of Texas in 1966? He killed over a dozen people -- and was killed at the scene by a police officer.

But of course the fact that mass shootings almost rate as an American tradition is cold comfort to the latest victims. Indeed, if anything, what it says to me is this: It's about time we finally do something about them.

In 1994 the U. S. Congress passed a law banning automatic assault weapons. But the law sunsetted after ten years, in 2004, when Congress did nothing to extend or renew it. So presumably it was perfectly legal for Mrs. Lanza to have all those weapons in her house -- the ones her disturbed son took and used to kill her and the young students at the school.


I have seen a few articles making essentially the same argument for guns that my brother-in-law makes -- that if more people were armed, then potential mass murderers might think twice before they initiated their attacks. See this article by John Fund at National Review if you want to follow the reasoning.

These arguments make a certain kind of internal logic. But they just don't square with reality. First of all, many of the killers like Adam Lanza are on a suicide mission. What do they care if someone else has a gun? Besides, they typically outarm any potential gun-carrying citizen. Plus, the proof of the pudding is that, with all the guns in America, it's never a civilian who stops the killer. It's always the cops.

In 1966, a civilian joined the police officers who attacked Charles Whitman on the observation deck. But the civilian's rifle went off prematurely by mistake. It was the cops who actually took down the killer.

Furthermore, I don't see any justification for allowing normal citizens to carry automatic weapons. There's nothing in the 2nd Amendment about automatic weapons. We banned them once before; we should do it again. Here's a report on what some U. S. Senators are beginning to propose.

I understand that Americans want to be able to hunt, and go take target practice, and the 2nd Amendment clearly gives them the right to do that. But I don't see why the ownership of guns can't be regulated on the basis of public safety, just like we do with drugs or automobiles. After all, it's not hard to get a driver's license, or buy a car. Nobody is trying to "take away" our cars by requiring us to have a license and register our cars with the state. But if a car is used in a crime, or a driver hurts someone in a hit-and-run, we at least know how to track them down. And the fact that people know this likely has some deterrent effect against reckless driving and criminal behavior. 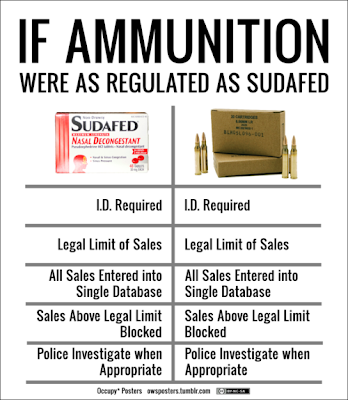 Obviously, regulating guns more effectively is not the whole answer to the Newtown type of crime. But instituting some reasonable safety regulations is absolutely part of the solution. Certainly, we can also work to improve our schools and our mental health facilities. But that's a long and uncertain road.

Some people have fingered violent video games and violence in the media as contributing factors to violence in the real world. I'm sure there's some truth to that. But I doubt we're ready to start down the road to censorship, so we have to rely on the media to police itself, which you know is not going to be very effective.

You might have seen the following message on the Internet, supposedly from Morgan Freeman. I read it and thought it made some sense. Then I found out the message is a hoax. It did not come from Morgan Freeman. But whoever posted it ... maybe they weren't so very wrong.

I fully agree that the assault weapons ban should be re-instated. If the law was still in place, Lanza would not have had access to them.

But we have to ask ourselves why people buy guns. It is because of fear. Lanza's mother was an avid believer in the Doomesday Prepper theory. She really thought the world was going to come to a financial collapse and she hoarded food, water and guns in preparation. So, do we now ban the TV show, violent video games and horrific movies? Personally, I say yes. Our media thrives in shoving fear down our throats. How many of us are made to be terrified of the upcoming Fiscal Cliff? Most of this fear mongering is unnecessary and misleading. It compels us to act defensively where un-needed.
Everyone needs to take a deep breath and relax and think for a moment. Banning guns may not be the end all panacea we may want it to be. In the UK guns are banned but mass killers just use bombs now (as in car bombs, bus bombs, subway bombs) Plus, those countries you listed have far fewer than the 300+million people living in the US. I fully agree assault weapons should be banned, but so should fear mongering, TV shows with Doomesday themes, murderous video games and mass murderous movies and the like. Also, we all should pay attention to our friends and neighbors. If someone says they want to kill and hurt other people, we should listen and take the appropriate action. David Brooks from the NY Times said there is a pattern to all these mass murders. The killer is a young male adult, used to entitlements and getting what he wants. When he can't get what he wants, he reacts and gets even. Perhaps our liberal, permissive parenting should be adjusted. In life NOT everyone gets a prize. What are we doing to our children? Are we bringing them up correctly? Obviously we are now reaping what we have sown. So, lots to think about. Lots to change. All I know now and am certain of: SOMETHING MUST CHANGE. And quickly.

First, I'd like to point out that automatic weapons are still illegal, there has been no change in that. Second, the "assault weapons" ban banned mostly the rifles that are modeled on true assault weapons (fully automatic capability) such as the semi-automatic AK-47 version.

There has been a call to limit magazine capacity which may be a good thing though it will not prevent atrocities such as Sandy Hook but might make it easier to limit the damage done.

I find myself in agreement with Mr. Freeman; a lot of fault can be placed on the media (and with our own collective morbid interest). Each such atrocity leads to another. A disturbed person may see "celebrity", not "infamy", in the coverage.
Can we afford armed guards at every school and college?

Thanks for weighing in with a thoughtful discussion, Tom. I found Morgan Freeman's remarks so enlightening. While I do support some sort of gun control (at least automatic weapons) and more and better mental health resources, I also agree that media hype feeds the imaginations of sad nobodies who seek celebrity and a sick sort of immortality through horrifying crimes.

The media tends to give people what they want. No profit-driven organization would use violent shows, sensational news, and over-the-top coverage if people didn't watch.

There are those who do use fear in other ways. Remember Y2K...neither does anyone else because nothing happened. But what a climate of fear for 12 months leading up to 1/1/2000 just to sell all sorts of new services and protections.

I don't understand why Americans are so consumed by fear. Live in Syria, Lybia, Egypt, or Japan just before a tidal wave hits to experience legitimate fear.

I would agree that regulation as a safety issue is not the same as trying to take away someone's right to own guns for legitimate purposes. I do believe there may be legitmate purposes though.

What bothers me the most is the facination with violence and the entertainment appeal (yes, that is what the media coverage becomes)of mayhem. Why is the media now driven by the lowest common denominator of society? How did we allow that to happen?

Re: God Bless America--What are the total number of murders in each of the listed countries? Is the U.S. just more violent than other contires, or do baseball bats take over when guns are not so accessible?

Many people in those countries who have tightened up gun safety controls watch American media. It doesn't appear that their gun murder rates have risen as a result.

"Blame the media" often is sort of a knee-jerk reaction by those who aren't willing to do the work to find real solutions to problems.

It appears this time we will get some more stringent gun safety rules. About time.

Good review of sensible arguments about the link between practically unlimited access to firearms and senseless violence. I've argued elsewhere that there are several pieces to the puzzle, none of which can be identified as the single "cause."

We can't control what the media choose to cover (or what people watch), and I don't think we're ready to take steps needed for better treatment and controls for some of the mental conditions we don't fully understand.

So what's new NOW is that there may be enough outrage about Sandy Hook that we can at last follow through on some of the arguments that were no less cogent 20 years ago than they are now. Maybe last week's events in Connecticut will provide the political will, the key factor that's been missing until now.

Our dueling governors (MD and VA) have two different approaches. MD wants to ban assault weapons and VA wants to place an armed guard in every school.

States can regulate the sale of guns, but gun owners can cross state lines. Connecticut has some of the toughest gun laws on the books.

I know it would cost a bit, but why not have armed guards at entryways in schools? We have them at branch banks, office buildings and the like. Get rid of the guns and next time it could be a bomb.

While banning semi-automatic weapons is a good idea, I think more is needed. Your chart on how many deaths we have in America compared to other countries shows we need stronger gun control.

Good balanced points on the topic. Found this blog following a rabbit down a hole!

Banning automatic assault weapons seem good but it is not a solution to control crime. For the record, I believe that if you make the decision to own and carry a firearm for self-defense or for sport you should always abide general gun safety rules and you should be confident and proficient in firearm handling. Gun safety course is very necessary for the gun owners to learn all aspects of firearm.