Are You Fragile, or Antifragile?

Nassim Nicholas Taleb, who famously warned of the Great Recession in his earlier book The Black Swan, now advises us how to thrive in an uncertain world in his new book Antifragile: Things that Gain from Disorder.

Taleb, a former Wall Street trader and currently a professor at NYU Polytechnic Institute, specializes in probabilities and uncertainties. His singular insight in his first book was that unlikely and improbable events sometimes do occur, and when they do they cause huge, sometimes catastrophic consequences.

Most of us think that the future will basically repeat the past, with perhaps a few minor variations. But he says the really important events are rare and unpredictable. He calls them Black Swans, a reference to a 17th century truism that all swans were white. What was the chance of seeing a black swan? It was impossible to calculate -- until 1697 when explorers found the black Cygnus atratus in Australia.

Taleb says that predicting the future by extrapolating past events -- which is what economists, political operatives and marketing gurus do -- may be reasonable and plausible, but the exercise is practically useless. Who predicted September 11, or the financial crisis of 2008? But not all Black Swans are bad. There was the end of the Cold War. The smart phone. "History does not crawl," says Nassim, "it jumps."

In his new book, Taleb looks at everything from individuals to corporations to governments, and he finds that systems tend to get stronger when they're routinely subjected to minor stress, disorder and turmoil. People and organizations that face up to challenges on an ongoing basis are able to survive the large events. They are antifragile. Conversely, if you're fragile, you're disproportionally harmed by large events.

Fragile entities can't handle outside threats because they haven't been tested. They can't accommodate change from within because differences are suppressed or ignored. The Soviet Union, which suppressed dissent, was a fragile state. The industrial towns of the Midwest were fragile, because one change killed the town. Silicon Valley is antifragile. Detroit is fragile.

Democracies are antifragile. They not only tolerate argument and dissent, but actually thrive on the give-and-take of various interests. They trade short-term predictability for long-term stability. A country like Saudi Arabia, which does not tolerate dissent, is a fragile state. 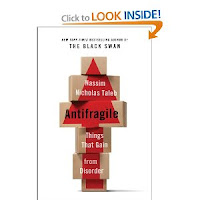 The cabdriver and restauranteur control their own work flow; they're constantly in contact with customers; if things change they know right away and can adapt. The corporate employee is at the mercy of the bureaucracy; he or she doesn't control sales or new products and may not even know about a developing accounting scandal. Typically, loyal employees who get laid off haven't dealt with the changes and the disorder of the outside world -- and may have few resources to make their own way in a new competitive environment. And if those employees carry a lot of debt, they are even more fragile.

Taleb's message is that while most of us feel uncomfortable with stress and strain, the struggle makes us strong. By responding to small shocks we constantly refine and improve our system. Conversely, removing small shocks creates the illusion of stability, but makes a system more prone to falling apart when the next crisis comes along.

I don't know how accurate or groundbreaking Taleb's ideas are. They have been criticized by some academics. But they seem interesting and relevant to me, particularly the notion he develops that our modern economy has created structures allowing certain groups of people -- like corporate bankers and politicians -- to take excessive risks without any risk to themselves personally. Top executives and elected representatives are able to pass the downside consequences of their actions onto stockholders, pension funds and taxpayers -- transferring their own fragility to other people.

One way to avoid this, Taleb argues, is to insist that all decision makers bear the consequences of their actions. Corporate officers should own their company stock, and suffer financially if they make bad decisions, not walk away with million-dollar exit bonuses. Politicians should have the same medical and retirement plans as their constituents. Doctors and lawyers should be paid for results, not on the basis of how many tests they do or motions they file.

Aside from that, I hope he's right about his main point:  that argument and dissent make a nation stronger. Because we certainly have plenty of that, don't we?

Deep down, we know these things, can relate to his premises and conclusions. I do hope though that there is much scholarship to back up his points.

As is so often the case you provide much food for thought. I think the notion that history "jumps" is certainly true.

Taleb is a wise man. I would only add that he seems to ignore (ironically while accepting "randomness") what I like to call the "magician's other hand."

I learned a long time ago that I work better (but not more efficiently) under stress. The "loyal corporate employee" does not have to be caught unaware. He could operate under a philosophy of "optimistic pessimism" wherein he hopes for the best but prepares for the worst. Yes, he is limited by corporate bureaucracy (and arrogance) but he does not have to extend that limitation to his life outside of business or even to his corporate life.

I think we choose to be unprepared more often than we think.

As I read, I reached the very same conclusion. We should be a pretty darn strong country after the last election.

Lots of controversial thoughts here. Just filed the post for use (with credit to you, of course) as a topic for a discussion group I chair.

I like the concept. I suspect the US is quite non-fragile unless we have the expectation that things should stay the same. But what things?