Did it seem to you that December took a long time to get here? It did to me, I guess because Thanksgiving came early this year. My internal clock says December should arrive a few days after Thanksgiving. But this year it took 9 days for the calendar flip over.

Be that as it may, my Christmas -- er, Holiday lights are up. Santa Claus is standing out there in the rain. And the calendar has also come around again for my turn at the Blogging Boomer Carnival.

I'd like to be in a position to spread some Christmas cheer, but the first entry comes to us from John Agno at So Baby Boomer, who reminds us that beginning in the 1960s, many U.S. manufacturers moved their operations to the lowest cost labor source. This resulted in many of the Baby Boomer Generation, who were born in what are now ghost towns, finding employment opportunities elsewhere.

(But rest assured, So Baby Boomer's reflection on his own ghost town is interesting, not depressing, and it includes a recommendation for a new book by one of my favorite authors.)


Laura Lee over at Midlife Crisis Queen reports in: "Since I'm now known for my annual 'I'm beginning to dread a lot about Christmas' post, this new post named How to Make Happier Holidays shouldn't surprise you. No more than Congress: DO YOUR JOB! on my Midlife Queen Blows off Steam blog. This one fell out of my brain at 4 a.m. recently!"

(Although, in my opinion, even thinking about Congress can be depressing!)

(In case anyone's interested, I want an iPad for Christmas, with 4G capability; and my carrier is Verizon.)

Meanwhile, Baby Boom blogger Katie Foster is traveling these days -- apparently with limited access to the Internet. Since she's based in Dubai, one can only speculate how far afield she's gone this time! But here's a ticket to Arabian Tales if you want to revisit her blog.

(I myself stay closer to home over Christmas; the best I've got is an invitation to drive 3 hours to go see some family in Pennsylvania.)

So anyway, it's not only the Midlife Crisis Queen who's talking about the Fiscal Cliff. I myself did an entry on it a few days ago. But there's another financial issue that was recently on people's minds. Which begs the question: What do you do with last week's losing lottery tickets? Use them for confetti? As kindling to start your Yuletide log? A bookmark?  Or, as one person suggested, throw them all over the Fiscal Cliff to cushion the fall?!?

Meanwhile, here from HappyPlace.com (which I'd say is R-rated, so don't go there if you're easily offended) are instructions on . . . 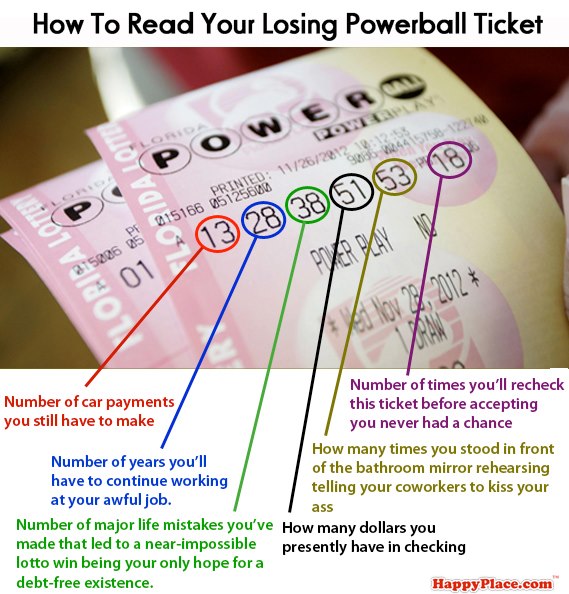 You always provide much for me to think about. Thanks.

Love the lotto ticket. Once, while At&T was contemplating (and instituting) layoffs, I remarked in response to a question about how I was planning for retirement that "I'm buying lottery tickets."

I am a member of the Blogging Baby Boomers, trying to convince myself and others that we Boomers are not responsible for really screwing things up here economically. But you brought me back to reality with your comment about outsourcing manufacturing to the lowest cost labor source. So what can we do to turn it around? Start....

So this is what the carnival is all about. I had an invitation to join recently and had no idea what it is.
Looks like the carnival is best suited to bloggers from the US.

We have come across this article, which is very useful. Thank you for sharing this blog post. Kindly check a few of the cancer-related articles, which your readers may be interested in referring to. We request you to access the articles at-
https://www.nirujahealthtech.com/cancer-related-articles/. It would be great to consider linking a few of these relevant articles, which can surely benefit the larger audience.