What Did You Do Over Thanksgiving?

We drove up to B's brother's house, outside of Boston, where . . . no, we didn't see any Pilgrims, but it did feel very Thanksgiving-like, with the scudding clouds, cold air and bare-fingered trees. We had dinner with her brother and his wife, their three children and nine grandchildren, then stayed overnight and left the next morning.

On the way home we stopped for another night in Sturbridge, MA, which features Old Sturbridge Village, a re-creation of a New England village of the early 1800s.

The docents are dressed in period costume. They do not play the role of their historical characters (like the guides at Plimouth Plantation, who speak in a 17th century dialect). But they do demonstrate some of their crafts, such as this woman who was carding wool. 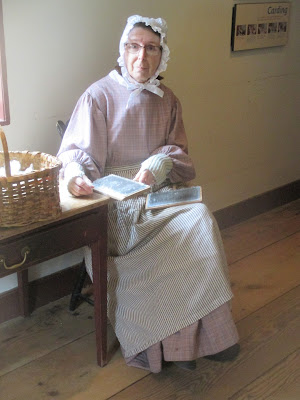 B got to try some carding (do you know what carding is?), while I went next door and viewed the loom and the spinning wheel. 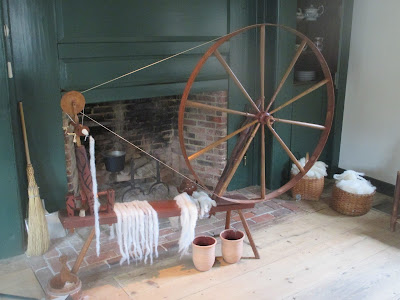 By the 1830s the factories and railroads were starting to transform the way things were done in New England. Still, if you wanted to go from Hartford to Worcester (about 65 miles) you'd get on a stagecoach and, making stops every 12 to 15 miles to change horses, arrive at your destination a mere 12 hours later. 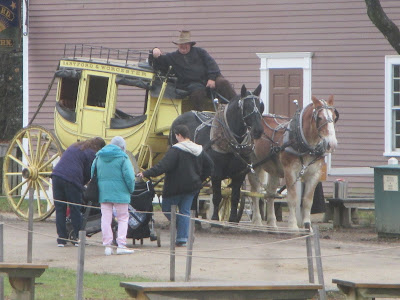 As you probably know, there were other aspects of 1800s life that lacked the creature comforts we enjoy today. No central heating. No indoor plumbing. We went into one small house, and noticing no bathroom, I asked the guide, "Oh, is there an outhouse?" She shook her head and pointed outside. "They used the trees over there behind the wood pile." I was aghast. "Really? Even the women?" She nodded. "Only the bigger houses had privies."

We stopped at the bank, which was originally built in the 1830s and later moved here from Thompson, CT. There was no ATM. But there was a modest collection of old coins, a tiny wood-burning stove and a small but very formidable-looking safe. 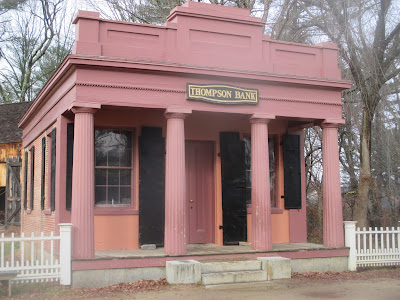 After carding, B made a candle; I looked at the old rifles and guns and then visited the printing house. I also was interested in the clock collection -- which has nothing to do with Sturbridge Village except the Wells brothers, who owned an optical company and founded Old Sturbridge in the 1930s, also had a collection of old clocks, some of which are now displayed in the welcome center. 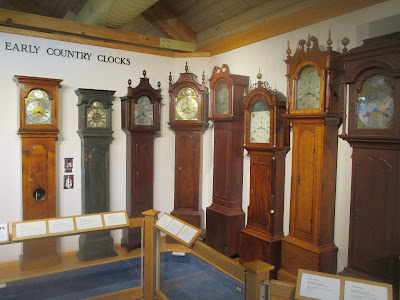 There is a Protestant church and a Friends Meeting House (I was surprised; apparently there were some Quakers in New England in the 1830s, although Catholics were still frowned upon) and a General Store. 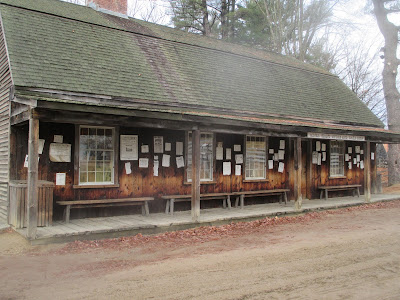 A few animals roam the grounds -- chickens and . . . I don't what these are, but we got out of there fast! 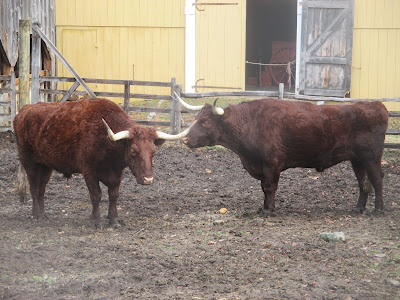 So what about you? How did you celebrate the holiday and give thanks for all our progress and all our modern blessings?

I had a wonderfully quiet and delicious holiday right here at home, eating sockeye salmon caught by my fisherman friend and all the fixings. It was definitely different from yours, although I sure enjoyed learning about the New England village. :-)

I had both my children and both the grandchildren for a traditional Thanksgiving dinner (except for the kale salad). My grandson stayed for the weekend. We did some decorating for the Christmas season and went to see a performance of The Nutcracker.

We're preparing to move to a "family compound"(2 houses, one property) with the kids and g'kids 200 miles away. Everybody is exhausted from packing, and nobody was inclined to make the drive either way. So my husband, brother and I went to Jack in the Box. I brought a Thanksgiving tablecloth, napkins and paper plates, and we had a great time!

This is a sort-of family tradition. We did this once years ago when my parents were still with us. A bigger group, but everybody enjoyed the whimsy and it was one for the memory books!

No cleanup, no leftovers hanging around for days. Yes!

This looks like a fascinating place to visit and immerse oneself in history.

Trudy -- I admire your creativity. Reminds me of the time my wife and I and a few friends, in the 1970s, were away on Thanksgiving and had to go to a restaurant we could afford. The only one open was a Chinese restaurant. So Chinese it was ... and I still have a great memory of that evening!

I remember visiting Sturbridge years ago and enjoying all of the demonstrations. Some people talk of a "simpler" time. It seemed very hard and complicated to me.

We did have a simple Thanksgiving, though. Low-key and lovely.

I love reading all of the different 'Thanksgiving Traditions' above.
My husband and I were in Palm Springs for our Thanksgiving (October). We had BBQ steaks by the pool with two other Canadian couples (We did put cranberries in our salad, and we had pumpkin pie for dessert).
Donna
www.retirementreflections.com

Looked up carding wool and still don't know exactly what it is all about...We were also in the Boston area for Thanksgiving, enjoyed a traditional dinner. Less pleasant was the long drive home Friday!

Being Canadian, we had our Thanksgiving weeks ago, so no feast this weekend! But I did start my Christmas shopping. I've decided to be a good sport about it all, join in the hustle and bustle without any whining. Got through the weekend (three malls and five stores) without one grumble! So a good time was had by all!

Hi Tom! Happy belated Thanksgiving. And as has been said, "Thanksgiving is good, but thanks-living is better!" It sounds to be like you and B had an interesting day. Thom and I and another couple went to Baja California just south of San Diego. We had a beautiful oceanfront breakfast, played 18 holes of golf and then went to dinner at a local restaurant in Rosarito. We all had a great time and it helped that it was crystal clear blue skies and 80 degrees! I believe we all have much to be grateful for! ~Kathy

Gee, Tom, the cows look like Texas longhorns to me, but that's impossible.

Your day looks interesting. Reminded me that's how my VA and other ancestors lived before pioneering inland -- rugged life compared to today. Look like Longhorns to me, too, maybe before Texans took possession of them? Enjoyed young neighbors unexpectedly sharing a portion of the dinner they were leaving town with for a long holiday with their older family members when they learned I had returned home the night before Thanksgiving following my having experienced an unplanned medical issue. Truly gave meaning to Thanksgiving for me with the food much better than the backup rations for such situations that I would have retrieved from my freezer. Then, resting through the day periodically texting and talking with my midwest and east coast children, grandchildren, especially 5 yr old was the dessert.

"They used the trees over there behind the wood pile." That statement reminds me of when I took a bunch of Camp Fires primitive camping. Had to teach them how to dig a hole and position a large, forked tree branch tactically to provide a bit better "outdoor" experience.

Cattle: Uh...Snowbrush...whatever they are (and Longhorns sounds likely), they were NOT born female (cows), unless my eyes deceive me.
Cop Car

"Cattle: Uh...Snowbrush...whatever they are (and Longhorns sounds likely), they were NOT born female (cows)...

I happened to recognize those longhorns, and they are known to me as transgender beings who were attending a support group for bovines who face the same life challenges.