In this week's roundup of baby boomer blogs we say goodbye to some people and some old passions, and we say hello to a few new efforts.

First and foremost, Meryl Baer of the blog Six Decades and Counting remembers her mother-in-law who died earlier this week at the age of 90. Check out The Woman in the Polka Dot Dress as she recalls "one helluva feisty lady." 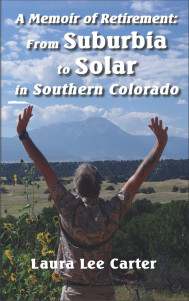 Laura Lee Carter says goodbye to her old blog The Midlife Crisis Queen, which was dedicated to encouraging "those who struggle with midlife change, those who wish to transform their lives into exactly what they have been dreaming of for decades."

But in the process of writing her blog, Carter realized, she changed her own life, and now she announces the birth of her new book, available on amazon, A Memoir of Retirement: From Suburbia to Solar in Southern Colorado. In the book she tells the story of how she and her husband struck out for the Spanish Peaks to achieve their own retirement dream of solar self-sufficiency.

Laura Lee Carter is not the only retiree to go Off the Map. Over at Heart-Mind-Soul, blogger Carol Cassara reminds us that some of the most beautiful experiences come when you take a detour. Deviate from the plan. Go off the trail. Or, as she quotes from Herman Melville, "It's not down on any map. True places never are."

And speaking of journeys, Carol also goes back to last year to share some of the interesting things she found while Cruising Weirdtown, USA. Take a look. It might give you some perspective on Hillary, or if not, make you wonder why anyone ever (is that a real thing?) thought up the idea of the banana sling.


Meanwhile, we've all heard about how Wells Fargo bank went off the rails by opening thousands of accounts that people didn't want. Now on the The Survive and Thrive Boomer Guide, Rita R. Robison, consumer journalist, tells us that Comcast Corp. has done a similar thing. The company agreed to pay $2.3 million to resolve charges that it billed cable TV customers for services and equipment they didn't ask for, such as premium channels, set-top boxes, or digital video recorders.

Finally, Kathy Gottberg offers a post about the California mega-concert aimed at Baby Boomers called Desert Trip, featuring Noble Prize winner Bob Dylan as well as the Rolling Stones, Paul McCartney, Neil Young, and others. But actually, her post is not so much about Desert Trip as it is about making choices. "How many times do we all make a decision and then face either regret or FOMO (Fear of  Missing Out)? . . . What helps us decide? How do we ever know if we've arrived at the best choice?"

Take a look at How to Make the Right Choice or the Power of the Bigger Yes. And then you'll know how to say good bye to the past, and hello to the future.

Meanwhile, here's an old song from the new Nobel Prize winner, with a one minute intro. from Pete Seeger, and then the song starts . . .

What a great roundup Tom. Thanks for sharing our worlds with others...

I love the variety here! Enjoyable!

Great summary, Tom. I'll go check out the ones I hadn't already. Thanks! :-)

I saw Bob Dylan perform in Hawaii decades ago. Quite impressive.

Love the fact that Bob Dylan won the Nobel Prize...makes total sense to me. He is a change agent in our society.

Hi Tom! Thanks for including my post in with your boomer roundup this month. I am always happy to fit into your "bigger YES" for who to include. And yes to great variety from other good bloggers. ~Kathy

No one was more surprised (or pleased) than me when Dylan won the Nobel Prize.

Hi Tom, read your blog with interest. When I read about the situation in the US regarding healthcare issues I always feel grateful for our National Health Service. By no means perfect but it does mean some peace of mind that you know you will receive whatever medical care you may need regardless of your ability to pay and no insurance premiums to pay.

Also nice round up of some other blogs. I' m just starting out and if you want to check out a "brits" perspective my blog is :
https://johnretired.blogspot.co.uk
I would welcome and value your views.
All the best

I had to laugh about the Bob and the Nobel Prize but I guess he did do some original thinking and writing when he made up his songs.

There is a chance you are eligible for a complimentary $1,000 Amazon Gift Card.