Is Your Microwave Safe?

How many of you use a microwave? I sure do . . . mostly to reheat my coffee, but also to reheat leftovers, especially pizza, and sometimes to cook vegetables, and defrost the frozen chicken, and heat up the maple syrup and the chocolate sauce.

I used to like to microwave my baked potatoes. It's much faster than waiting around for them to get cooked in the oven. But B put a stop to that. She says microwaved potatoes taste soft and mushy; an insult to cooking and the whole culinary experience.

Okay, okay, I get it. We're trying to keep up a few standards around here. But I didn't think it might be serious business until I saw a post the other day by a friend of mine on Facebook. Apparently, a secondary school student in Sussex (that's in England, right?) read somewhere that the microwave somehow compromises the structure or energy of the food.

So as a science fair project she took two identical plants. She watered one plant with water that she heated to boiling in a pan on the stove, then let cool. She watered the other plant with water heated to boiling in the microwave, and then let cool. She wanted to see if there would be any difference in the growth between the normally boiled water and the water boiled in a microwave.

The result after just nine days: 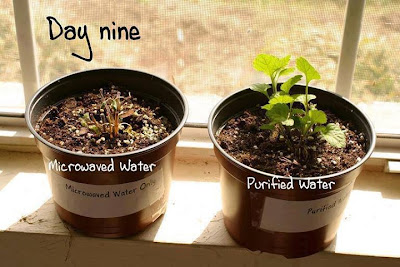 There is an explanation about how the problem with microwaving food is not the radiation people used to worry about, but how it corrupts the DNA in the food so the body cannot recognize it. Microwaves agitate the molecules to move faster and faster, causing friction which denatures the original make-up of the substance. It results in destroyed vitamins, minerals, proteins and generates new elements called "radiolytic" compounds, things that are not found in nature.

If this is true, it's really pretty amazing, isn't it? The question is:  Do you believe it? I asked B if she'd heard anything about microwaves destroying the nutrition in food. She hadn't heard anything like that. But she admitted, like me, she hadn't been paying much attention.

I Googled microwave cooking, and predictably, found articles taking both the pro-microwave and the anti-microwave position.

My facebook friend is an educated, reputable woman. So I trust her judgment. But I don't know anything about the supposed young student in Sussex.

Now, I'm no scientist. I have no idea how a microwave works (is it magic?). But I recall the scientific method from the 9th grade general science course I took from Mr. Mele back in 1963. So I have decided to try to replicate this experiment.

I have two identical plants, in similar condition, and I'm placing them in the same location. I will water one plant, in the gray pot, with microwaved water only. The other will be watered with the same amount of normally boiled water. 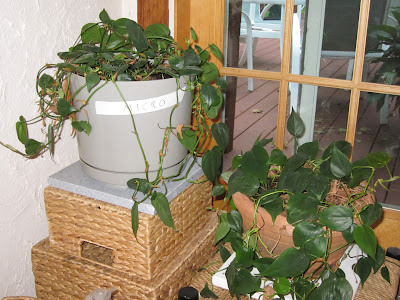 Check back here in a week. I'll post another picture, showing the difference, if any. We'll see what happens. Any predictions? My only prediction is that the difference would have to be very dramatic to make me stop reheating my coffee in the microwave.

I'll be waiting to see the outcome of your experiment. I don't microwave much but you can't be too careful.

Interesting experiment and important topic. Anxiously await your results. I wonder about the effect of microwave/convection ovens are.

I'll be interested in seeing what happens, too. I use the wave to heat my veggies when I fix a meal with previously steamed food. Hmmm.

Goodness. I hope the plants are okay at the end of your experiment. I cook many things in the microwave, and have wondered for some time if the veggies cooked in those 'Steamfresh' bags were devoid of vitamins. Dianne

I will watch for your results. Reheated coffee?? What n abomination. Are you also the one who wrote about happily drinking instant coffee?

Love a "nuked" potato occasionally and reheated coffee fresh from the microwave frequently. Hope your carefully constructed research results in exoneration of micros.

Yes, Olga, I did write about happily drinking instant coffee. Or, as my sister the coffee snob says, I don't drink coffee at all. I drink warm, sweetened coffee-flavored milk.