"A long memory can drive a man crazy."
-- Brit Bennett, The Vanishing Half


We had a slight disagreement over the last weekend. We were visiting family in Pennsylvania, where the matriarch of the clan, at age 96, lives in an independent living facility.

She is still pretty healthy and lively. She takes a walk every day, has lots of friends, gets around without using a walker or even a cane. In fact, with a little help from one of her daughters, she can walk just as far as we can, and at the end of the day doesn't complain about her tired feet as much as we do.

But she no longer has a car, she doesn't drive, and she can't get anywhere by herself. So she wanted us to come over to her place for dinner -- that was the only way she felt she could take her turn as host for the family.

And that's where the disagreement came in. Her son, age 68, hates to go to the independent-living dining room. The food is pretty good, and the dining room is bright and new-looking. But . . . it's the people. They are, of course, all old. The average age is pushing 90. There are very few men (and they are usually falling into their soup). The women are hunched over with arthritis and osteoporosis. Their thinning hair is white. Many are in wheelchairs.

In short, it's depressing as hell.

Her two daughters were not fazed by the situation. One of them, who lives nearby and visits her mother once or twice a week to help her out, takes the whole situation in stride. The other daughter was ready to go. She thought the food was good, and joked that she was too busy burying her head in her plate to notice all the infirmities and indignities of the other people in the dining room.

I myself (I'm embarrassed to admit) agreed with the brother. I had been to the dining room once before. First of all, they insist on eating dinner at 5 p.m. Way too early for me. (Remember the old Seinfeld episode when Jerry visits his parents in Florida, who want to get to the restaurant for the 5-o'clock special? Jerry whines: I'm not going to eat dinner in the middle of the afternoon, just to save a dollar! When they do go to the restaurant at a normal time, Jerry's father's friends think he's so rich he must be embezzling funds from the condo association.)

Anyway, I admit the food was pretty good, and the dining room was pleasant. But I can't stomach a meal when the people at the next table are sitting in wheelchairs looking like they should be in the hospital, not in the dining room.

You see all those old people. You see your future. And it kills your appetite.

Besides, there's another issue for us men. You can't help but notice all those aged women, and so few men, reminding you that as horrible as it is for these women to get old and infirm, they're better off than the men, who have already died.

Do you think I was being insensitive? Callous? Selfish? Impolite?

It's not that the men categorically refused to have dinner at the mother's place. We would have gone if we had to. And it's not that the women were adamant about eating at the independent living facility. But they thought it was important for their mother be able to play hostess, to feel that she was part of the family, involved in the activities, and not just the poor, helpless relation people felt obligated to visit. 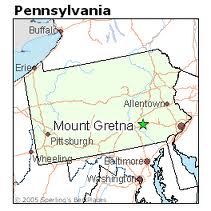 We men could understand that, so we finally hit on a solution. We drove down to the independent living facility and picked her up. Then we headed over to a little place nearby called Mt. Gretna, comprising several small communities dedicated to "the promotion of cultural and religious activities, recreation and entertainment."

We took a walk; got caught in a light refreshing rain; we saw the theater where they were rehearsing a musical, and ate dinner at a modest but popular local spot called the Jigger Shop, where they serve hamburgers, sandwiches and the best ice cream in the world. 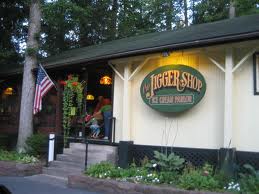 And the girls' mother got her way. She was the host, as she happily paid for dinner.

Later, when we got back to her apartment at the independent living facility, we wondered if we should just drop her off, or should we go inside for a visit. Was she too tired? Did her legs hurt?

One of my two brothers had a hard time going to see my mother after she went into the nursing home. She had pretty advanced dementia by then. I was often there at meal times since I would visit after work. That way I could make sure my mom got her ice cream--pretty much what she cared about the most.

I can't make a judgement call on the wish not to sit in a room full of old and feebles. I think it would feel pretty much like a big test to me too.
I do think the solution that you reached was positively inspired.
And the Jigger Shop sounds divine.

It is hard to face our futures.

Wonder if the age of the beholder has anything to do with it. One of my aunts was an administrator at a private home for elders. As a young guy, I ate there with her in the dining room several times. Can't recall having anything but good thoughts about the many very old folks nearby.

Would I see things differently now?

My mom's place is filled with married couples! Surprisingly the residents are 40% men.

I guess, as a woman who has cared for my infant children, I think---it is pay back. My mother nursed me through the mumps and chicken pox, I certainly can see her at the place she lives....

As for the rest of the "old people", you might want to ask a few questions. I found the men at my dad's table, when he was long past his prime, owned stores, were doctors and tennis pros. The conversations of life in the REAL 40's and 50's are amazing. I even heard stories of riding horses to school.

Dick asks a good question. I notice that things which appeared one way a few short years ago seem different now.

I think how "well" folks are in their old age is highly correlated with their income level over their lifetimes. David and I have visited retirement places we could not afford, and found the people lively and energetic into their 90s. I hate to say it, but it looks like the medical advice and health care you received over your life time, make a difference.

I will make a most excellent senior citizen as I love to have dinner finished up by 5:30.

My Mama passed away at 95 in 2004 and lived in an assisted living facility for 5 years prior to needing more intensive care. She loved hosting us for dinner at the assisted living facility...and the food was not good! It made her feel so proud to "show off" her children and grandchildren to the other residents...she was the hostess and the proud matriarch in front of others. Their world keeps shrinking and anything that we can do to encourage and support them means everything. I like to think (I'm 65) that my own children will follow suit in my decrepid old age, since they grew up spending time with aging Grandmas who adored them and fondly repeated family stories. Do I think that you "guys" made the best decision on this one? It seemed to work for all of you so great....but you did miss that opportunity for her to share her family with those she is surrounded by every day....a little "star power" which by the way fuels resident conversations for days after! Helen

A local assisted living facility has a meeting room that they let community groups use for meetings at no cost. When I was a high school VP we used the room for meetings during the school day when we needed to meet away from school. We always paid to have lunch in the dining room. At first they seated us at a table in a separate dining area, but we requested to eat with the residents. Yes, some of them were depressing, but there were also some very interesting people. Give them a chance.

Given that I've seen many different types of dining areas for the older generations, listened to the residents themselves express their views about what you speak, I find this whole conversation quite interesting.

If finances were not an issue, then your hostess may have enjoyed the outing you suggested. Very likely it cost her more than it would have to have eaten in her dining room. What subtle message, or not so subtle, she received by not graciously accepting her invitation and dining location is another matter. Maybe she would prefer to eat out every chance she gets -- someone close to her should be able to learn her true feelings on that matter.

Some facilities do provide a special dining area to which a group may go to be by themselves, or sometimes a separate table can be obtained in the regular dining area -- probably has to be pre-arranged.

Often it is very important to the resident to have friends/family occasionally visit to eat with them in their dining room -- to consistently avoid doing so sends a not so positive message on many levels, and oldsters are not so stupid as to not be aware of this.

I can certainly understand that in an ideal world we would avoid all the unpleasantness in life -- older people whose health is declining, cripples in wheelchairs in the public arena, but this is life.

We might wonder what it says about our own humanity that we can have so little understanding and empathy for those in a state each and every one of us could be in, or worse, in the blink of an eye.

If that was you, I would hope you would have the courage to keep trying to go to the dining room as long as your were able, and not become a recluse in your room knowing guests would not want to eat with you in the dining room.

Interestingly, I've encountered individuals in very poor physical condition who voice the same objections about eating "with all those people" when they themselves are sometimes in worse condition than those about whom they object.

Whether it's Asst.Living, Skilled Nursing these people need the support of friends and family who care enough to share in their world for just a short time out of the visitors lives -- once in a while.

Statistics show that women outlive men, so any of these group living situations -- and even people living independently in their apts and homes throughout our cities -- are going to ultimately have more females than males whatever the financial status.

Oh man, I think you could sense that I already felt a little guilty about this. Now I feel more guilty than ever.

Next time, if I have anything to say about it, it's to the Independent Living dining room we go!

I'm thinking that while mom "happily paid" it probably cost her more than hostessing in the dinng room-do we know she can readily afford that event thoug she did it happily? I'm also thinking that considering all Ive done for my kids, they can surely come to me for a single meal....but then Im big on guilt, lol.