I always thought that your personal habits as well as your whole attitude toward life helped determine how healthy you are and even how long you live. For example, I figured people who are cheerful and happy, the life-of-the-party types, had a leg up on the rest of us in terms of life expectancy. I mean, if you're really happy, doesn't that give you a strong incentive to live as long as you can?

But it turns out that is wrong. In fact, cheerful people are less likely, on average, to live to a ripe old age than people who tend to be more serious. Why? Because happy-go-lucky people are prone to "illusory optimism" -- they underestimate health risks and don't follow medical advice. These people are less likely to wear their seat belts, for example, and they also tend to drink, smoke, and party hard.

I was actually reading a story about life insurance when I stumbled on a reference to this longevity study, started at Stanford University in the 1920s and completed last year by two University of California researchers, Howard Friedman and Leslie Martin. The results were published in a book called The Longevity Project. They have also developed a consulting firm, Longevity Insight, which specializes in "informational products with a focus on longevity." 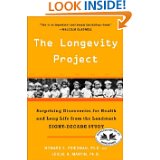 The results from the 80-year study show that people who are conscientious -- careful, hard working, maybe even a little neurotic -- are the ones who live longest. These people on average do more things to protect their health. They're more likely to go for their annual physical and recommended tests; they're less likely to smoke or drink to excess; they're even less likely to speed or break other traffic laws. These are the people who also tend to arrange their lives for their own benefit. They somehow find their way into happier marriages, better friendships, healthier work environments.

It may come as no surprise to discover that successful, wealthy people live longer. Part of the reason is access to top-notch medical care, a better diet and healthier lifestyles in general. But the other part of the equation is that success did not necessarily bring on overwork and more stress. Instead, those who lived a long time tended to work hard and strive to overcome obstacles. Apparently, striving to accomplish a goal, achieving success, and then setting new goals, are characteristics of people who tend to live long, healthful lives.

Marital state did not necessarily help people live long, productive lives. A happy marriage was found to produce healthy side effects for men. But not necessarily for women. A bad marriage raised health complications for both genders. But it was women who were more likely to stay healthy after a divorce, as they found it easier to turn to friends and family for social support. Men who got divorced, and did not remarry, were at high risk for premature death.

The researchers confirmed that people who go to church tend to be healthier than those who don't. But the benefits derived primarily from the increased social interactions people enjoyed at church, not from the religious experience itself. So presumably any other regular social engagement would be just as beneficial.

Kids who started formal schooling at an early age typically had health problems later in life. But many kids who suffered a childhood trauma -- the divorce of their parents, for example -- were able to bounce back and, perhaps because of the resilience they developed, lived to a ripe old age.

It turns out that your personal habits and your whole attitude toward life do affect your longevity. Just not in axactly the way we thought.

So eat your broccoli. That can't hurt. But it's more important to be conscientious about your life, set some goals for yourself and work to achieve them; make it a point to build a happy, positive intimate relationship, and a good, supportive group of more casual friends.

Good advice. The only one I'm currently following is that I love broccoli. Go figure.

Interesting study. I wonder if there's a division into several groups of the happy positive types? I believe the language we use in our heads is the mediator of our actions, etc. So, I do believe the positive thinking (not unrealistic seeing-life-through-distorted rose colored glasses types) -- maybe more the glass half-full versus half-empty types who may not exercise some of the health-destructive practices you cite here -- might be more likely to live at least as long, if not longer as those negative/pessimistic types. (Know some for whom that's true.) Am thinking also of those more positive ones I personally know, including some who've have passed the century mark.

Despite the fact that I think studies reflect the attitudes and biases of those who run them or contract to have them done, I still read them.

I could go on (and I usually do) but I think you get the idea.

That's me....conscientious -- careful, hard working, maybe even a little neurotic, or was before I retired. Now I am careful, hard-working on things I love, and hopefully not too neurotic as the DSM stopped using the term 20 years ago...but what do they know.

I am more relaxed since I don't commute in the DC traffic, that's for sure. Thanks for an informative post. I could read about health issues all day long. Dianne

So . . . cheerful is bad because cheerful people don't take responsibility for their health, but resilient people stand in good stead for long lives.

And some people get hit by buses as they cross the street.
It happens.

Preventive health care as well changes in diet and lifestyle can certainly be rewarding. It isn't always easy but those who practice healthy habits do live longer and enjoy a higher quality of life, including those with strong family history of disease.