She was born in Port Arthur, Texas, in January 1943. Her mother worked as a registrar for a local business college; her father was an engineer for the oil company Texaco. Can you figure out who she was?

She sang in her church choir, but as a preteen spent more time perfecting her painting skills than practicing her scales. She went to her local public high school where there must have been something in the water. One of her classmates was actor G. W. Bailey (Rizzo in the TV series "MASH", currently Detective Louie Provenza in "The Closer") as well as football player Jimmy Johnson (who played for the national championship team at University of Arkansas and later coached the University of Miami to a national championship and the Dallas Cowboys to two Superbowl championships.)

However, she was not a standout in high school -- at least not for the right reasons. She gained weight and suffered from a bad case of acne, and instead of listening to current pop music, she fell in with a crowd that listened to African-American Blues singers like Bessie Smith and Billie Holiday. She was taunted with nicknames like "Pig" or "Freak" or "Creep." Later, looking back, she simply described herself as a "misfit."

She went to Lamar State College in Beaumont, Texas, then to the University of Texas, where she recorded her first song, "What Good Can Drinkin' Do." A 1962 article in the Daily Texan called "She Dares to Be Different" began: "She goes barefooted when she feels like it, wears Levi's to class because they're more comfortable and carries her autoharp with her everywhere she goes so that in case she gets the urge to break into song it will be handy."

She left college in 1963 and headed to San Francisco, where she teamed up with fellow up-and-coming musicians to record some blues standards. In San Francisco she also launched herself into the drug scene, taking amphetamines and psychedelic drugs, washing them down with Southern Comfort.

In 1965 she tried to clean up her act. She returned to Port Arthur, Texas, and went back to school at Lamar College, while occasionally making the trip up to Austin to perform solo, accompanying herself on the guitar.

The following year a music producer from San Francisco recruited her to join a band, and so she moved back to California and began to play at the Avalon Ballroom and other venues. The band released its debut album in August 1967, which included the hit single "Down on Me." They toured the East Coast where they appeared on the "Dick Cavett Show" and performed with Jimi Hendrix, Joni Mitchell and Richie Havens. Time magazine called the lead singer "probably the most powerful singer to emerge from the white rock movement."

The band, called Big Brother and the Holding Company, put out a second album, Cheap Thrills, which was almost immediately certified gold and reached Number 1 on the Billboard charts. It featured the hit single "Piece of My Heart" and a version of the George Gershwin song, "Summertime," the kind of soulful rendition that could only have been performed by . . . Janis Joplin.

When Janis Joplin first joined Big Brother, after returning to San Francisco from Texas, the band resolved not to take drugs. The resolution was well-intended, but soon was diluted by alcohol and eventually by the harder stuff. By the time Janis Joplin appeared at Woodstock in August 1968, she was injecting drugs intravenously.

Joplin broke with Big Brother at the end of 1968 and formed a new group, The Kosmic Blues Band, which lasted a year and recorded one album. Joplin then started the Full Tilt Boogie Band, which she took on tour across Canada, ending in Boston, playing her last live performance at Harvard Stadium on August 12, 1970. 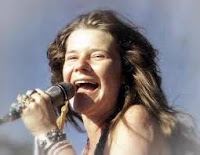 At the end of August she checked into the Landmark Motor Hotel in Los Angeles and began rehearsing and recording a new album. The last recording she completed, on October 1, 1970, was the a cappella "Mercedes Benz", in which she asks the Lord to buy her a Mercedes Benz.

Three days later Joplin's producer grew concerned when she didn't show up for rehearsal. He sent the band's road manager to the Landmark to see if anything was wrong. The manager spied her psychedelically painted Porsche sitting in the parking lot, and when he got up to her room he found her lying dead on the floor beside her bed. The official cause of death was overdose of heroin, possibly combined with the effects of alcohol.

Janis Joplin was cremated, her ashes spread over the Pacific Ocean from an airplane. Her last album, Pearl, came out posthumously in January 1971.

She died at age 27, but her legacy lives on -- in her style, in opening new opportunities for women in rock music, and in influencing later popular singers. Current female vocalist Florence Welch, of Florence and the Machine is one who, along with Stevie Nicks, Nina Simone, Bette Midler and others, acknowledges her debt to Joplin. Said Welch of Joplin: "There was always a sense of longing, of searching for something. She really sums up the idea that soul is about putting your pain into something beautiful."

But here is the original Janis Joplin, with that soulful song appropriate for the season:

Email ThisBlogThis!Share to TwitterShare to FacebookShare to Pinterest
Labels: Music, Remember Her?

I didn't get it until the term "Southern Comfort" turned up, which says a great deal about the downside of her legacy. The upside is pretty glorious.

I guessed at the San Francisco and drug scene references. But I have to admit I was never a fan...

She was a huge influence in my life.
You told me more then I remembered.

She was certainly a gifted performer, but it's too bad she was compelled to burn her candle at both ends, making her flame go out all too soon.

Janis wasn't one of my favorites, but she is an icon of the time. Her story mades me sad.

27. Such a tortured soul. I loved her music and at one time had all her albums. (Hm, remember albums?)

She represent an entire era!

Oh yes, I remember her.
They don't make them like that any more.
It's such a great pity that drugs and alcohol played a huge role in the lives of others like her too, a whole era of huge talents wasted before their time.

If I told you I guessed who it was when I read "Port Arthur, Texas", would you believe me?

Never saw her in concert,though. Pity. About that and the way her life ended.

Yes, I remember her. Too many voices stilled by the alcohol and drugs of that generation. Too sad. Dianne

Have got to say, with a certain heaviness -- great post. Got it at the inset photo: "Her psychedelically painted Porsche." For me, Joplin was scary bad then -- scary sad now.