Well, I guess I've gotten to that stage, because there sure are a lot of things I don't understand

For example, I don't understand why people refuse to wear masks. They don't work, they say. Well, they don't work perfectly, but they do help to prevent the spread of the virus. And really, donning a mask when you're on a plane, a bus, or in the supermarket . . . it's not that big a deal. 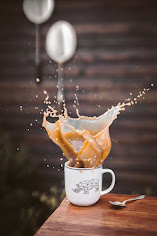 But then, I don't understand why people line up to go to Starbucks to buy bitter, overpriced coffee.

And I don't understand why people drive 75 mph, often 15 or 20 mph over the speed limit, risking their lives just to save a few minutes on a trip. Are we all in that much of a hurry?

And how it is that these same people are up in arms about global warming, yet as a group Americans are now buying more gas-guzzling SUVs than ever before?

Another thing I don't understand . . . why are all the most popular movies these days cartoons?

I don't understand why people say the U.S. is anti-immigration. There are 47 million foreign-born people living in America today. That's almost ten times as many foreigners as there were during the great immigration of the late 19th and early 20th centuries. Today's 47 million represent 17% of the U. S. population. When we were kids, in 1970, foreigners represented less than 5% of the U. S. population. So that's a lot of immigrants for a country that's supposed to be anti-immigrant.

Republicans are supposed to care about law and order. Yet they want to do away with gun rules and take the law into their own hands. They flout safety regulations. They thumb their nose at the criminal justice system.

Meanwhile, Democrats want to give more money to the poor and raise taxes on the rich. Yet they also want to expand tax breaks that mostly favor the wealthy, like the state and local tax deduction (SALT) that according to the Fiscal Times would "provide a tax cut of $285 billion over five years with almost all the benefits going to the top ten percent of earners."

We're also in an age of instant communication with smartphones, texting, Facebook, Instagram, Twitter and a myriad of ways to connect with people. Yet a study by the insurance company Cigna found that about half of Americans say they're lonely. NPR says older adults are especially vulnerable since many live in isolation. Loneliness has led to greater drug use, and higher suicide rates especially among the elderly.

As you may know, the Washington football team abandoned its monikor of "Redskins". Now, after more than a year of trying to settle on a new nickname, they've announced the team will make its big reveal on February 2. Drum roll please . . .

The point of a name is to make the team seem scary and ferocious, with the idea that it will boost morale and intimidate opponents. So if they really want to scare people they should name the team the Washington Representatives, for there are plenty of scary people in Congress. Or how about the Washington Lobbyists? Or maybe even the Washington Anti-Vaccers?

Email ThisBlogThis!Share to TwitterShare to FacebookShare to Pinterest
Labels: Humor, State of Mind

You have a long list of things for us to think about. We keep hearing about divisions. these issues have certainly divided us.

Amen with the exemption of one or two.

I am with you 100% on the masks. And the non-mask wearers are the ones whining about this never ending. Yes, because you won't wear a mask!

It is a great post, and I liked what Red said. There is a lot here to think about. I worry we're becoming too sensitive, always looking for a reason to school someone or be offended, on the other hand, I find uncompromising fault with the anti maskers.

PS. My hometown high School football team is the Waynesburg Raiders, with a profile of an Indian I mean native Americans head. I don't see a problem with that either, but what do I know?

I am just as perplexed as you, as I sit here in the choir you are preaching to. We wear coats when it is cold and buckle our seat belts to limit injuries. Neither is an absolute that they will protect us perfectly but smart people do these without any objection. Will never understand how a vaccine attacks personal liberties. Sigh.
BTW, think you ought to send those mascot names to Washington. I'm leaning towards "Lobbyists" as being the scariest and most intimidating.

Well, maybe another thing I don't understand is why I seem to be so fixated on masks and vaccinations. I don't mean to school anyone, in Doug's terms, but it's just that they're so basic, so obvious ... like coats and seatbelts as Patti says. And I hope I haven't offended any Starbucks fans.

We are a controversial lot. I saw "Don't Look Up" last night. While a bit heavy-handed it does show how shallow we are in thinking.

"We don't know what's going on in the world." I don't understand this statement as it seems that mainly the older generation (us) are the main ones that listen to the news (at least this is what I see from my corner of the world). As for trends, that may be true... because as we age, I find we're less interested in trends and tend to leave that to the young.

And I do think that most people are in the middle - not the extreme edges that each side pushes to the frontlines. I think most people don't want this division and need to find a way to compromise. IMO nothing is black and white (can I still use this expression to mean absolutely one way or the other?). Almost everything has areas of gray... that must be considered in every circumstance.

And I don't understand how easily some people get offended these days (some may have reason to, but some seem to look for a reason to be offended or insulted IMO anyway). Sometimes it's not what's said, but the intention of the person saying it.

Times have changed. We adjust. Some more than others.

Yes, it is a confusing place, our world.

CREDIT OFFER BETWEEN INDIVIDUALS.
If you want to borrow money between individuals serious and reliable, Our pleasure will be to help you benefit from loans between individuals if you embody the serious. With 2% interest per year depending on the amount loaned. We guarantee you a response and a deposit within 48 hours.
Benefit from a 100% secure loan in the following areas!
-Personal loan
-Auto loan
- Ready for work
-Real estate loan
-All projects ...
Contact:
Eledgefinance@gmail.com

Love your post! I agree with everything you said. We all have our "I don't understand" moments. I like the comments where people have chimed in with their own IDUs.

I don't understand why a shopper has to put their shopping cart in the very center of the aisle while they shop 10 feet away.
I don't understand those that offer you the option of a COVID test in lieu of vaccination proof unless they continue to have you test every 24 hours.
I don't understand where all the rubber goes that wears off of our car tires- I would expect a pile of rubber dust along every road or a rubber build up on every road!

Not a whole lot makes sense anymore. As Rodney King once said, "Why can't we just get along?"

In my winter retirement community, I don't understand why upwards of 200 people will attend a New Year's Eve party in a 30-year-old "ballroom" with inadequate ventilation, and then be surprised when half of them get omicron three days later.

All of the above. Humankind just becomes more of a contradiction in terms as the days go by!

Hi Tom....yeah, me either. I don't understand all those things you bring up and dozens of others. My Thom likes to quote Don Henley who said, "The more I know the less I understand." Or what about Einstein who said, "The more i learn the more i realize how much I don't know." I guess just trying to manage my own life takes enough effort that I just have to let go of trying to figure out why people do what they do. Thanks for that reminder. ~Kathy

Hi Good Afternoon! I read your blog and it found helpful for me. Thankyou for sharing

Awesome post, Tom and definitely food for thought. I can certainly understand why Native Americans would not like a team calling themselves Redskins. I think that is offensive. Why not be like Chicago? We supported the Bulls, Bears, Cubs, White Sox whether they won or lost.

They are not cartoons, they are "Animated"
As for driving fast, people always say they are in a hurry to get home, or to the store, or wherever. Like those buildings are going to get up and move on and you might miss your chance?
My mum always said, don't drive so fast, your house will still be there if you are late.