"How we react to works of art depends on who we are, where we are standing and when we encounter them." -- Margaret MacMillan, "War: How Conflict Shaped Us"

I first knew there was something going on when I heard my teenage son say that something was "sick" -- meaning is was really good. Or it was "fat" -- which made it even better. Except I think he and his friends spelled it "phat."

More recently I've heard him talk about "doom scrolling" -- which refers to trolling through the Internet looking for negative news about the economy or anything else. He's mentioned "ghosting" -- which means ending a relationship by suddenly and without explanation halting all communication.

My, how things have changed.

When I was a kid things were much more simple. Something was either "cool" or it was, "Hey, that's not cool."

We must have had a few other references and sayings. But I think I took most of them from my parents. For example, my mother would always caution us kids that we didn't want to find ourselves, "Up a creek without a paddle."

She also used to tell us that "a stitch in time saves nine" -- which basically means the same as "an ounce of prevention is worth a pound of cure." She also warned us: "Better safe than sorry."

My dad always told us that "we reap what we sow." But his favorite saying was: "A penny saved is a penny earned." And then he'd go on to explain that, actually a penny saved is really more than a penny earned because the penny you earn is subject to income and payroll tax. He was a stickler for detail. And also a child of the Depression. 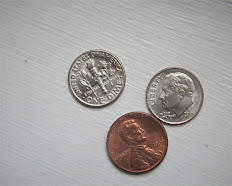 Of course, these old sayings are "a dime a dozen." But let's face it, they are often so true that they "hit the nail on the head."

I remember my high-school math teacher used the phrase: "Belt and suspenders." I think it means essentially the same as "better safe than sorry." But the point is, the teacher wanted us to solve a problem, then go back and check our work, and even go back and check it again. (I never went that far, which might explain why I got Bs in math and not As.)

My next-door neighbor liked the phrase: "That's a fine kettle of fish." I'm not even sure he knew what it meant. But his parents used the phrase, and he liked to mock his parents . . . in front of his friends, but never in front of the parents themselves.

I don't mean to open up a can of worms. But don't just sit there like a lump on a log. What are some of the truisms you learned from your mother or father . . . or passed on to your own kids? Go ahead. Don't be a stick in the mud. You can let the cat out of the bag.

A bird in the hand is worth two in the bush. The early bird catches the worm. He who hesitates is lost. You can't take it with you! Beauty is in the eye of the beholder. Beauty is only skin deep. A watched pot never boils. Measure twice cut once.

Cross that bridge when you come to it. Every time I said "huh" as a kid, my dad would say, "kick a pig in the rear and it goes huh." When we asked him what time it was, he'd always say "ten to." Then we'd say ten to what, and he'd respond "tend to your own business." Frankly, my dad was pretty annoying that way. . .

I had a fellow teacher who always used "Don't beat a dead horse".

When I was in college, I met & began dating a girl named Charlotte (who went by Charlie). After a month or so, my grandparents invited us to their house for dinner. I told Charlie along the way that my grandpap was a very serious-minded person, not talkative, but my grandma was the exact opposite. Sure enough, after we arrived my grandma asked Charlie what her favorite music was and did she like the Rolling Stones. Before CHarlie could answer, Grandma grabbed the floor lamp beside Grandpap's chair and pouted her lips and said "Quick kids, who am I!" Grandpap said "May, I believe I was reading with that..." Grandma said "Then stick your finger in your eye and make starlight!" Never heard it before, never heard it since!

Julie -- Good ones. My folks were not early risers, so I never heard the one about the worm. Sheila -- I think that's called Dad humor!

Last Saturday I visited the Civil War Museum here in Harrisburg. There were several bullets that looked like chewing gum with teeth marks from “biting the bullet” during surgery in the Civil War. Hence the term “he bit the bullet” and persevered.

You can't make a silk purse out of a sow's ear.
No use shutting the barn door after the horse has run away.
A day late and a dollar short.
Done or raw, it will will the craw.
Root hog or die.

An oldie but goodie that I learned too late: Marry in haste, repent in leisure.
Nina

My Mom would say," Pretty is as pretty does" when she thought I might not be behaving so pretty.

Only gamble what you can afford to lose.

I drove to school in my dad's Camero, which was a pretty sweet ride. My friend, Katie, always called shotgun. We had to get there early, so we didn't get stuck in BFE, which would be really lame. Like lame-o-rama! But it was totally awesomeness when we got a good spot, and some hunks caught up getting out of that ride. Of course, my dad smoked, so the car smelled a little funky. I really would have rather driven a station wagon...NOT!

Ha ha, Bethany, thanks for your suggestions from a different demographic. They're awesome, they're dope.

When I was in High School the term "Straight" was used for somebody who did not drink Liquor and did not smoke Pot. Most of my friends were Not Straight. Calling somebody Strait Laced was somewhat of an insult. My kids keep telling me that words change meaning and they ask for clarification if I use the phrase.

A good Shakespeare quote that captures a human tendency: me thinks thou dost protest too much…..sometimes that exaggerated response reveals that the person is not telling the truth.

One of my favorites, which I use around the house all the time is, "many hands make light work." Somehow it gets everyone to pitch in like magic.

I remember a few phrases like "that's bitchen" and "gag me with a spoon." I'm sure our parents were just as confused.

I remember cool being cool and then it wasn't abd then it made a comeback. The last I knew the word for it is now lit, but maybe that has already changed.

@Plynjyn
Bite the bullet: soldiers about to have surgery were given a bullet to bite because in those days there was no anesthesia.

Save it for a rainy day. Don't bite the hand that feeds you. You can take a horse to water.... Are you trying to heat up the whole outdoors?

Whistling girls and cackling hens always come to no good ends. LOL, my mother hated that I could whistle better than the boys and always said this to me. She was always trying to make a "lady" out of her tomboy.

My mom is a Mrs. Malaprop and says things like, "That's a horse of a different ballgame" or "He didn't have a penny to rub together." My late dad had many pithy sayings from the small mining community he grew up in. However, they didn't mean anything to most other people.

Since my parents couldn't speak English well, they sure didn't pass anything down to me. I can't think of what I used with the kids. Perhaps I used, "Better to be safe than sorry." I might have used "Sticks and stones" but that wasn't really true because many times words CAN hurt more.

I got Diagnosed with Herpes, I have be dealing with Herpes for the past 4 years. On till I got review online about natural cure people testifies how DR.OBUDU cure them with his herbal treatment. And I order the treatment, after taking it for 21 days I totally got cured with DR. OBUDU treatment. I'm recommending you diagnosis with herpes should get this treatment and be cured of it you can contact his email address via; drobuduherbalhome@gmail.com or you can also call or whatsApp +2349023428871 Website: https://drobuduherbalhome.wixsite.com/welcometoobuduherbal
also cure the following virus and many more... 1} Cancer 2} Diabetes 3} Hepatitis 4} fibroid 5} herpes 6} Lupus

Your posting was "real George".

Mr Pedro and his loan company was absolutely great to work with. He was extremely clear, thorough and patient as he guided my wife and I through the loan process. He was also very timely and worked hard to make sure everything was ready to go before closing the loan.
Mr Pedro is a loan officer working with a group of investors who help us get funds to buy our new home, You can contact him if you want to get a loan at an affordable low rate of 2% RIO   Email Him On . pedroloanss@gmail.com    Or       Whatsapp Chat: + 1-863-231-0632