Like the ancient mariners who set out from Europe to discover the New World, we set out from our home in Pennsylvania to test the waters of the Post-Covid World. We're headed to Charleston, SC, to see children and grandchildren. But on the way we stopped in Williamsburg, VA, to meet up with friends and tour the Colonial capital. 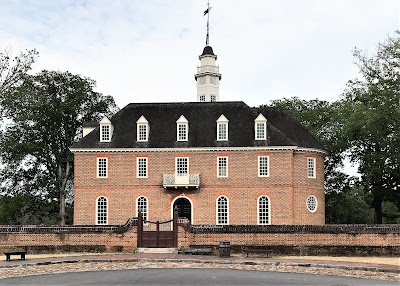 Williamsburg, capital of Virginia from 1699 to 1780, is now restored as a living-history example of an 18th century Colonial town. We spent the evening there, walking around the historic streets, meeting some of the guides, seeing a few of the old buildings. 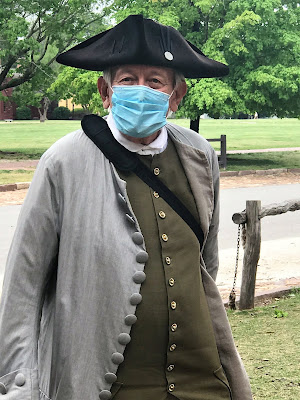 But we were more interested in nearby Jamestown, the first English colony permanently established in America. (The first was Roanoke Island in the 1580s -- known as the Lost Colony because the settlers mysteriously disappeared.) 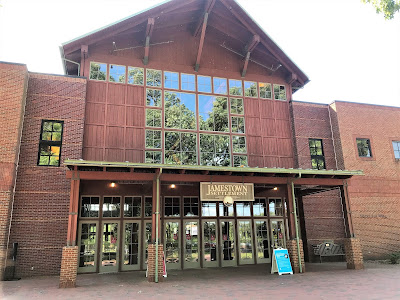 As we went through the museum we discovered that in May 1607 a little over a hundred English settlers in three sailing ships landed in Jamestown. They built a fort, tried to grow some food, and were soon set upon by the local Powhatan. As you know from middle-school social studies, the story gets complicated from there, with Captain John Smith and Pocahontas and the arrival of "20 and odd Negroes" in 1619. 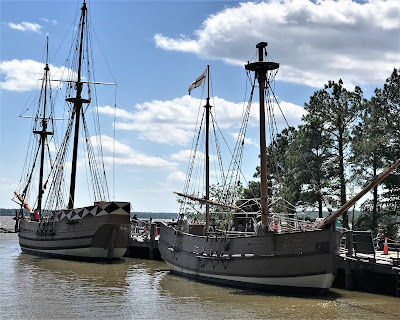 Many of the settlers were killed, or starved to death, but the settlement did survive and remained the capital of Virginia for almost a hundred years. We saw a re-creation of the fort, a Powhatan village, and two of the three ships that carried the settlers. 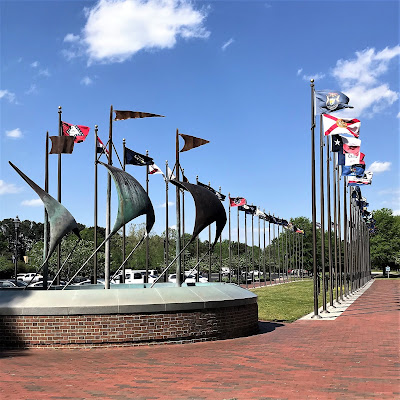 Of course, B and her friend had to stop in the gift shop. So while I waited I perused the 50 state flags flying outside the museum. Small factoid: We all know what the original 13 states were. But do you know the 14th state? It was Vermont, which seceded from New York in 1777, and was admitted as its own state in 1791. Vermont's constitution of 1777 was the first to provide universal suffrage and the prohibition of slavery.

Then we took a ferry across the James River and had dinner on the outside deck of a waterside restaurant . . . 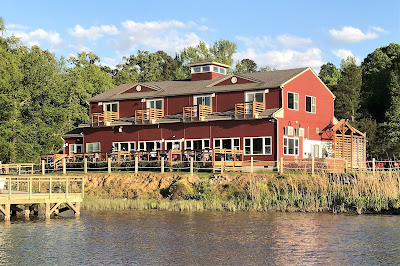 . . . and ended the day watching the sun set over the James River. 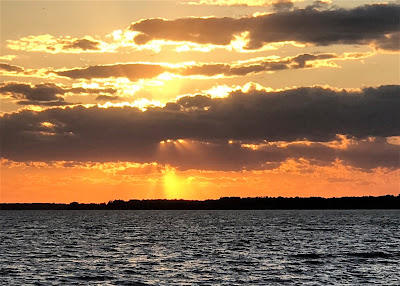 So we're traveling again. I can report that almost all the people stopping into the highway gas stations and restrooms were wearing facemasks and keeping their distance. So far so good. More than a hundred of the original Jamestown settlers died from starvation, Indian attack or malaria. We're pretty sure we're safe from starvation and Indian attack. We'll see if we survive Covid-19.
Posted by Tom at 10:34 AM

Just an aside, I was married the first time in the Bruton Parish Church in Williamsburg. Big fuss. We lived in Yorktown, and I was fascinated by living in the middle of that old war.

Thank you for writing about your adventures. I will enjoy hearing more about them as the days go by. I didn't know that history, either.

We visited Williamsburg on our HS Senior Class trip back in 1963 on our way to Washington DC, New York, and Niagara Falls. It was winter and what I mostly remember is how COLD it was (saw lots of snow and a blizzard). But glad you are traveling safely and happy to hear about your adventures!

Hope you are enjoying yourself. We really found Williamsburg to be quite interesting when we went there years ago.

Great pictures. We visited Williamsburg with the kids years ago. We survived a year in quarantine with streaming TV services, food delivery and curbside pickup, and online shopping. Not starvation and Indian raids. Only extra pandemic pounds.

What an interesting place to visit. The Lost Colony has always intrigued me. Where did they go? No one is talking. Glad people are still using precautions but that they were there is encouraging.

I'm glad your travels are going well so far.

It was so good to read of your trip so far. It's been a long time of no travel, right? For me too but I hope to take a trip to visit out of state siblings this summer.

Great photos Tom, glad to see you're enjoying the New World! I was there with my family many years ago, would be nice to go again. And I'm with Patti in regards to that Lost Colony! Anyway, stay safe and enjoy your travels. :^)

We start on our first trip in May. We'll be heading back to Connecticut to see family. Glad to hear people are behaving at rest stops.

I love historical places like Jamestown. Sound fascinating. I'm getting envious of your road trip and may try one someday!

Great info about the early settlers. Wish I could have visited that area of Virginia. My youngest sister lives in Annandale and my friend lives in Alexandria.

Isn't that an interesting area? My first husband and I went there on our honeymoon.