His birthday is coming up on Sept. 9. He was born in 1941, which would make him the same age as Bernie Sanders and Bob Dylan, as Ryan O'Neal and Joan Baez; the same age as Paul Simon and Art Garfunkel.

He was born in Georgia to a family of sharecroppers who were also active in the church. He sang in the choir as a boy, and learned how to play piano, guitar and the drums. He played in his school band; and on Sundays he earned $6 singing for a local Macon, GA, radio station.

When he was 15, he father contracted tuberculosis, and so he had to leave school and go to work to help support the family. He dug wells; he pumped gas; and he picked up a job here and there as a musician -- mainly playing piano for other local performers, including R&B singer Little Richard.

He got his break in 1958 when he won a talent contest called "The Teenage Party" singing Little Richard's "Heebie Jeebies." As a result, he was recruited to be the frontman for Pat T. Cake and the Mighty Panthers, and then The Upsetters, and he toured on what was then known as the Chitlin' Circuit, a string of performance venues in the South and Midwest that were open to black musicians.

A few years later, he found himself in Memphis, hanging out at the Stax studio for a recording session with Johnny Jenkins and Booker T. & the M.G.'s. The session ended early, and so he was allowed to try a couple of songs. Everybody was ready to go home; but when he started singing they all realized there was something special about his voice. "He really poured his soul into it," one of the musicians recalled.

The song "These Arms of Mine" was recorded and released, and he was signed to a contract with Stax Records. He recorded several more songs, and in 1964 his first album Pain in My Heart came out and rose to No. 20 on the charts. And by now you might know that the man we're talking about is Otis Redding.

In the meantime, he married a girl he'd met on The Teenage Party. They would have two sons and a daughter together, and adopt another son.

Redding was soon playing at the Apollo Theater in New York where he performed with Ben E. King and the Coasters. He spent his time writing and recording more songs including "Respect"  and "I've been Loving You" which were both released on an album called Otis Blue: Otis Redding Sings Soul. (Of course, "Respect" was later made legendary by Aretha Franklin.) 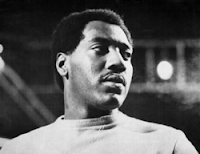 Redding bought a 300-acre property in Georgia which he called The Big O Ranch, and continued recording with Stax Studios in Memphis. In 1966 he covered "Try a Little Tenderness" a song previously offered by both Bing Crosby and Frank Sinatra. Backed by Booker T. & the M.G.'s, Redding gave the song a "negro perspective." The result was both a commercial and critical success, and it became his signature song for the rest of his life. For example, as the closing Saturday act at the Monterey Pop Festival in 1967, he sang "Respect" and "I'll Be Loving You" and finished with the soulful "Try a Little Tenderness."

In early December 1967, Redding was back in Memphis recording his new song "(Sittin' on) the Dock of the Bay." He then flew to Cleveland in his Beechcraft H18 to play three shows. And then it was on to Madison, Wisconsin. The plane left during a rainstorm, and was just a few miles short of its destination when the pilot radioed for permission to land. Then the plane crashed into Lake Monona. There was one survivor, band member Ben Cauley. Otis Redding's body was recovered from the lake the next day.

"(Sittin' on) the Dock of the Bay" was released posthumously and became Redding's only Number 1 hit record. Several other albums were later produced, consisting of Redding's previously unrecorded material. He was inducted into the Rock and Roll Hall of Fame in 1989 with a declaration saying that Redding's name was "synonymous with the term soul, music that arose out of the black experience in America through the transmutation of gospel and rhythm and blues into a form of funky, secular testifying."

Today, the Otis Redding Foundation is managed by his wife and daughter. The foundation offers scholarships, and sponsors a music camp and other programs to fulfill its mission to foster "progress through education and enlightenment through music."

It's so hard to visualize him as the same age as Bernie Sanders! But so good to hear that his Foundation is providing music education to young people who might not otherwise have the opportunity to develop their talents!

I sure wonder what might have been if that plane didn't crash and take out yet another mighty soul singer from this world so early. I love these Remember posts you so, Tom.

What I remember about reddding is that he appears in the film 'Animal House.'

A terrible loss. Sitting on the Dock of the Bay is the only song with whistling that I like.

One of my favorite singers, although I prefer the blueser and heavier stuff more than
"Dock of the Bay"

I loved dock of the bay, they played it for about 36 hours straight the days after his untimely death..What a fellow he was too bad he did not live, I don't care if he is the same age as Bernie Sanders..Watched the GOP debate, I can see why Donald trump is trumping them all, he is a hoot and I am a Democrat, it was crazy good!!!!!!!!!!!!!!!! Will be anxious to see if Biden gives Hillary a run for all her money, she is raising billions with movie people and influential people, but she smacks me of the same old same old..Bernie Sanders speaks near where I live this sunday he is a no nonsense candidate and has many valid points of discussion..Too bad the Democrats can't come up with a candidate who will be helping the regular people, oh, that would be wonderful!!!!!!!!!!!!!!!!!!

Great post Tom, love me some Otis anytime, the video brought up so much memories for me.