She recently turned 90 years old. But even in her prime, in the 1980s, she was known for her prematurely white hair.

She was born in Queens, NY, on June 8, 1925, but raised in the tony suburb of Rye, NY. Her father was president of McCall Corp., the publisher of a string of magazines including McCall's and Redbook. She was a true blue blood, distantly related to Franklin Pierce, the 14th president of the United States.

She attended upscale Rye Country Day School, then went to a boarding school in Charleston, SC, before heading to Smith College in Massachusetts. She dropped out of Smith after her freshman year, and on Jan. 6, 1945, married her boyfriend, home on leave from the Navy. He was the son of a prominent Wall Street banker, who had joined the Navy at age 18 and seen aerial combat in the Pacific.

The couple moved around with the Navy until the war ended. Then she followed her husband to Connecticut, where he went to Yale University, graduating in two and a half years in an accelerated program. They then headed to Texas, where her husband went into the oil business. He first got a job with a company connected to his father's business, and for a few years they shuttled from one Texas town to another, with a few layovers in Bakersfield and Compton, California.

They finally landed in Midland, Texas, where her husband co-founded Zapata, an oil drilling company. By the mid-1960s he had made his millions and was getting interested in Texas politics.

Meantime, she had six children, the oldest born in 1946 and the youngest in 1959. Her second child, a daughter born in 1949, died of leukemia in 1953. It was this tragedy, she allowed, that prematurely turned her hair from light brown to chalk white.

She had spent the first 20 years of their marriage raising children. But in 1966 her husband was elected to the U. S. House of Representatives, and she became a political wife. She joined him on a number of campaign stops, sometimes reluctantly, but continued to stand by his side for the rest of his political career, which included two losing bids for a seat in the U. S. Senate.

And by now you've got to be thinking ... blue blood, white hair, Texas politician. It has to be Barbara Pierce Bush.

After losing his second bid for the Senate in 1970, George Bush was appointed U. S. Ambassador to the United Nations. Two years later, as Watergate heated up, President Nixon asked Bush to head the Republican National Committee. Barbara advised against taking the position, but he accepted anyway.

In 1974, President Ford appointed Bush head of the liaison office in China, and the couple spent the next three years in Beijing. Bush returned to the U. S. as head of the CIA; and then ran for the Republican nomination for president in 1980. During the campaign Barbara spoke out in favor of the Equal Rights Amendment and said she was pro-choice on abortion. This caused some consternation among the conservative elements of her party, which ultimately chose Ronald Reagan as the nominee.

But as we all know, Reagan in turn chose Bush as his running mate and won the presidency. So Barbara Bush spent eight years as Second Lady, and then four more as First Lady.

During this time she presented herself as a traditional political wife. She took up some of the usual causes, such as homelessness, AIDS, the elderly, volunteerism. But her main push was for literacy, since one of her sons, Neil, had had trouble reading because of dyslexia.

She served on several literacy committees and chaired a number of reading organizations. She also wrote a bestselling children's book from the point of view of the family dog, and donated the proceeds to literacy charities. 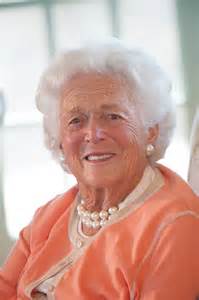 Along the way, Barbara Bush became known for her matter-of-fact style, her self-deprecating sense of humor, her domestic interests and lack of pretension. Nevertheless, she was not a complete stranger to controversy. When asked in 1984 what she thought of Walter Mondale's running mate, Geraldine Ferraro, she said she couldn't say on TV, "but it rhymes with rich."

Later, she made disparaging remarks about TV coverage of her son as president; she worried about too many "underprivileged" people moving to Houston after Hurricane Katrina. And she had a run-in with Republican vice presidential hopeful Sarah Palin. TV interviewer Larry King asked her what she thought about Palin, and Bush responded, "I sat next to her once, thought she was beautiful, and I think she's very happy in Alaska -- and I hope she'll stay there."

And more recently, when asked about her son Jeb's prospects for president, she claimed that while he was well qualified, she doesn't like the idea of family political dynasties. Her conclusion: "We've had enough Bushes."

All of which demonstrates that on the surface, Barbara Bush is the picture of dutiful suburban housewife and family matriarch. (By the time she moved into the White House, she had moved 29 times in 44 years of marriage.) But underneath that veneer, for better or worse, is a sharp, cut-to-the bone kind of wit.

I've always admired her, even when I didn't agree with her. Happy Fourth of July to you.

I always enjoy these "Remember" posts, Tom. Barbara Bush is made of steel, I'm pretty sure. :-)

I am surprised that she is pro choice. There are so many things I like about her after reading your post. Thanks Tom!

Good Grief, I knew it was here when you mentioned the white hair. If david jumped out of planes I'd be white-haired to....oh wait, i am. (He flew them while he was still drinking!)

"Almost everyone I’ve talked to says, “We’re going to move to Houston.” What I’m hearing, which is sort of scary, is they all want to stay in Texas. Everyone is so overwhelmed by the hospitality.

And so many of the people in the arena here, you know, were underprivileged anyway, so this, this is working very well for them."

A grand lady. A celebs I saw up close--close enough to wave to her as secret service agents whisked her past me in a Salt Lake City hotel corridor while another agent kept an eye on me. She returned my wave with a big smile.

Geez she was an uber rich woman who married an uber rich fellow..Their children think they should be the president of the USA not, Jeb is very smart I think much smarter than his oldest brother by then some..But in my opinion theyt are all elitist people with their agenda that anyone who not well connected doesn't matter whatsoever no thank you..She may have had lots of tragedies in her life but many other people have had them too..why can't you put someone in your rememberance section who really had to struggle really another Bush no thank you!