He was born in Shaker Heights, Ohio, on Jan. 25, 1925, in a family that welcomed religious differences. His mother was a Roman Catholic, born in Hungary, who as an adult became a Christian Scientist. His father was the son of Jewish parents who had also immigrated from Hungary. His father ran a sporting goods store, and his mother worked in the store while raising him and his older brother.

He identified himself as a Jew, though he never practiced the religion. And he was married for 50 years to a Protestant from Georgia.

He graduated from Shaker Heights High School in 1943 and joined the Navy. He wanted to be a pilot but was disqualified because he was color blind, so he instead trained as a radioman and gunner. He flew out of aircraft carriers in the Pacific, and narrowly escaped death in the spring of 1945. During the Battle of Okinawa he was scheduled to report to the USS Bunker Hill, but his pilot came down with an ear infection and was grounded, along with his crew. Soon after, when he was supposed to be on board ship, the Bunker Hill was hit by two kamikaze aircraft, resulting in explosions and fire that killed 346 sailors, including the entire contingent from his squadron.

For his service he received a Navy combat action ribbon and Combat Aircrew Wings. Then, after the war, he returned to Ohio and went to Kenyon College, studying both economics and drama.

He graduated in 1949 and married his girlfriend Jackie Witte -- they had a son and two daughters together. He landed some acting roles in summer stock in Wisconsin and Illinois, then after his father died, he sold his interest interest in the family store to his brother and headed east -- first to Yale Drama School for a year, then to New York City where he studied under Lee Strasberg at the Actor's Studio.

He made his Broadway debut in 1953 in Picnic, trying out for the lead role of Hal, but ending up being cast as Hal's old college roommate. He later took over the lead role, and fatefully, also met a woman, an understudy for the production who was to become his second wife.

A couple of years later the two actors worked together on the film The Long Hot Summer. He ended up divorcing his wife, and they married in February 1958. The following month his new wife won the Oscar for Best Actress for her role in The Three Faces of Eve. 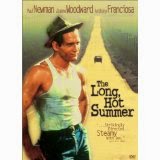 Paul Newman and Joanne Woodward remained married for 50 years, until Newman's death in 2008. They had three daughters together, and starred together in a total of ten films. In addition, Newman directed his wife in five other films.

Paul Newman, famous for his rugged good looks and deep blue eyes, was himself nominated ten times for Academy Awards, starting with Cat on a Hot Tin Roof, then The Hustler, Hud and Cool Hand Luke. He finally won Best Actor for his role in the 1986 film The Color of Money. But, ironically, he was not nominated for his work opposite Robert Redford in his two most popular films: Butch Cassidy and the Sundance Kid (1969) and The Sting (1973)

Newman was almost as famous for his activities outside of the movies. He was a lifelong Democrat and cast his early support for Eugene McCarthy for president in 1968. He was proud of the fact that he made Richard Nixon's infamous "Enemy's List." 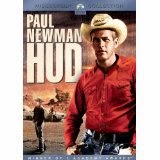 He was also interested in auto racing. He owned a number of race cars and competed professionally in several auto races. He was active in a number of charities including The Hole in the Wall Gang Camp, a camp for seriously ill children in Connecticut (named after his gang in Butch Cassidy). He was an environmentalist, preserving lands around his home in Connecticut; he donated $10 million to establish a scholarship fund at Kenyon College; and he helped form a committee to encourage corporate philanthropy.

He ultimately put his money where his mouth was when he founded a company called Newman's Own, starting with salad dressing. He later quipped, "The embarrassing thing is that the salad dressing is outgrossing my films." Regardless, now seven years after his death, Newman's Own is going strong with a whole line of upscale culinary products; and the profits still go to support Newman's favorite charities.

Interesting biography some of which I never knew. 50 years of marriage is saying something in Hollywood.

Thanks for filling us in on Mr Newman's early life. It wasn't until your mention of The Long Hot Summer that I "got it". I always admired Newman and Ms Woodward. They were terrific actors (and professionals at it!) and seemed to be abundantly decent human beings. In my book, Woodward was undervalued for her acting. Newman and Mr Redford made an outstanding pair - perfect buddies!
Cop Car

I love this bio of one of my favorite actors. David likes Newman's Own salad dressings.

Has it been that long? I had to look ahead to get this one.

I knew it was Paul Newman, he was and is still my all time favorite actor..I adored The Sting and have it on dvd and Butch Cassidy and the Sundance Kid I have it too..My only child just got back from the Sundance festival whereby Robert Redford opens and closes the festival..The acting pair has never seen another duo such as Paul Newman & Robert Redford at all..They don't even make movies like both of those movies, funny and hilarious yet moving and sweet tempered..I thought his wife the really and is still one of the few actresses who could really really act and she seems in my opinion and my mind humble and sweet, what a pair they were, their children are wonderful human beings indeed..No they just don't have movie stars such as Paul Newman a really great actor!!!!!!!!!!!!!

Do I remember him???
Are you kidding?
All you had to write was "blue eyes" and "salad dressing"!
Or maybe just "blue eyes"...

I wonder how many young people see his face in supermarkets and don't even know he was an actor.

Interesting background..things I never knew. I used to spot him on a number of occasions (in Connecticut; we lived 1 town apart) and it always got me all excited each and every time to see such an icon up close.

Loved him. What a class act.

I didn't know much about his early life, so I had no idea who it was until I learned about his wife. Aha! Paul Newman. I love his body of work, as well as his salad dressing. :-)

I submit Susan Sarandon and Geena Davis of Thelma & Louise fame. BTW: They are, according to yesterday's newspaper, thinking of having a live performance or a tour to mark the 25th anniversary of that movie.
Cop Car

Thanks for the details about Newman. I've been seeing reports that his widow, Joanne Woodward, is living with Alz. So I've been thinking about them both lately.

Enjoyed his films and appreciate his philanthropy.

Paul Newman was the epitome of acting talent, and what duly impresses me is he had the goodness and kindness of heart and humanity, and his handsome looks were an accompaniment. With the Pacific NW winter in full swing, your article spurs me to watch, and rewatch, any Paul Newman movie.

One of my old fellow Forest Service employees was assigned as "technical advisor" for part of a Newman film shot in central Idaho. My pal said when the day's work was done, Newman stripped down to his skivvies and undershirt, sat down with the crew for a lengthy poker game, and consumed huge amounts of popcorn and several beers while the game progressed into the wee hours.

Another testimony that this great actor was a genuine person--"just one of the crew" when not on the silver screen.

Nice post Tom. Oh I how I loved him. Will never forget those blue eyes.

We use the Newman's Own products. I heard an interview he did with Terry Groz on PBS where he said running his company came naturally to him because his father was a shopkeeper. Today one of his daughters runs the company.

My favorite role of his is in Exodus. I've seen that film a dozen times since I first saw it on the big screen back in the 1950s. Next would be Cat on a Hot Tin Roof...excellent. And he made several films with JoAnne.

Someone once asked him why he had never had an affair during his long marriage to JoAnne, and he said, "Why go for chopped liver when every night you come home to steak." What a guy.

I loved his looks. That his dressing outlived him makes sense because salads can be a bit hard to eat undressed.
You sure do know his business well.