"You've got to go there to know there." -- Zora Neale Hurston

When most of us think of Florida we picture the sand and the beach and the golf courses; and images of Disney World dance through our heads. But when you drive from the east coast to the west coast, you travel through central Florida, and that shows a whole different side of the state.

For example, we forget that Florida -- and much of the South -- was once a major producer of timber and paper. Not so much anymore, but there are a few remnants . . . 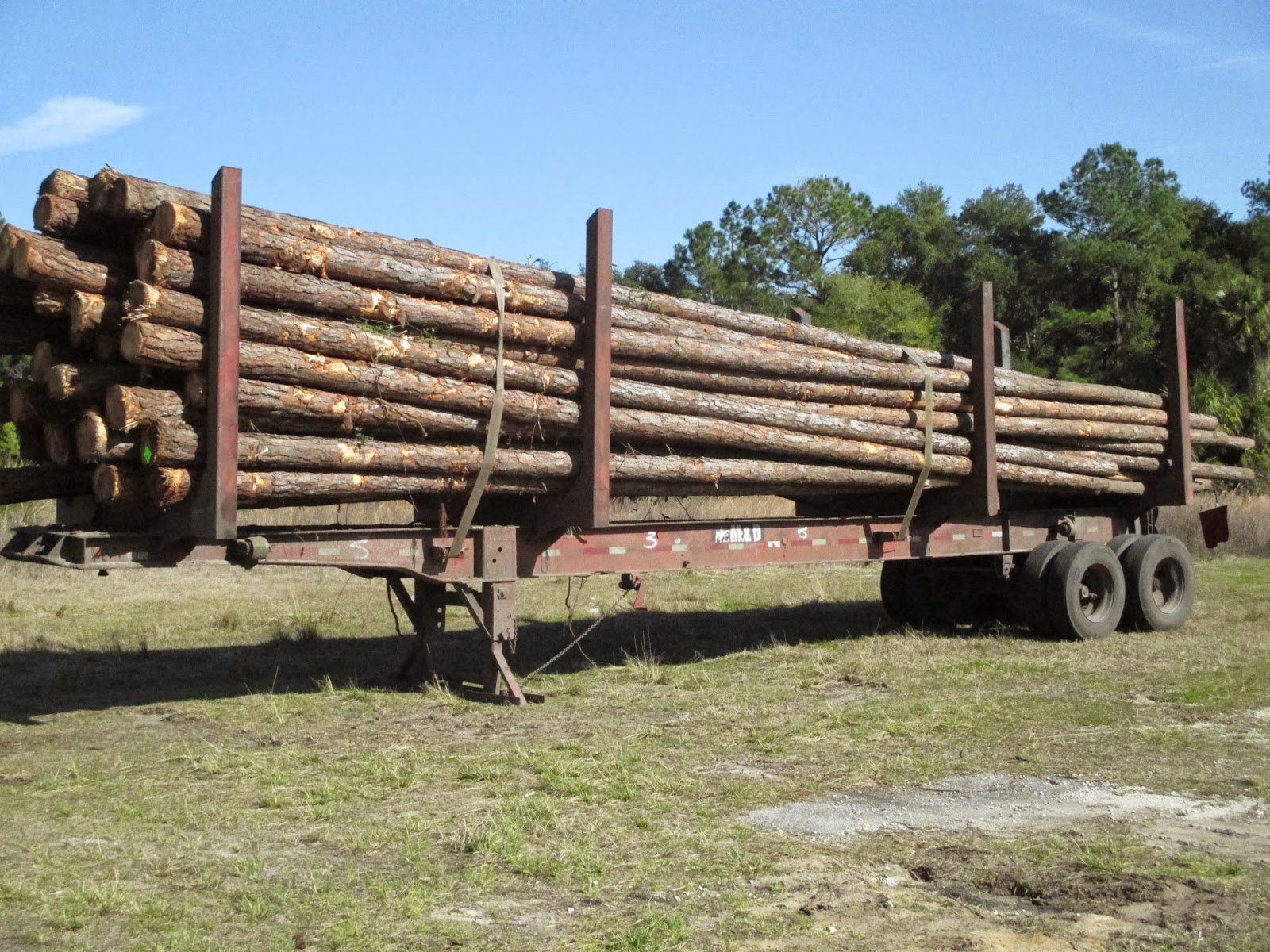 And before the tourists and the retirees, there was a "real" economy that actually made things . . . 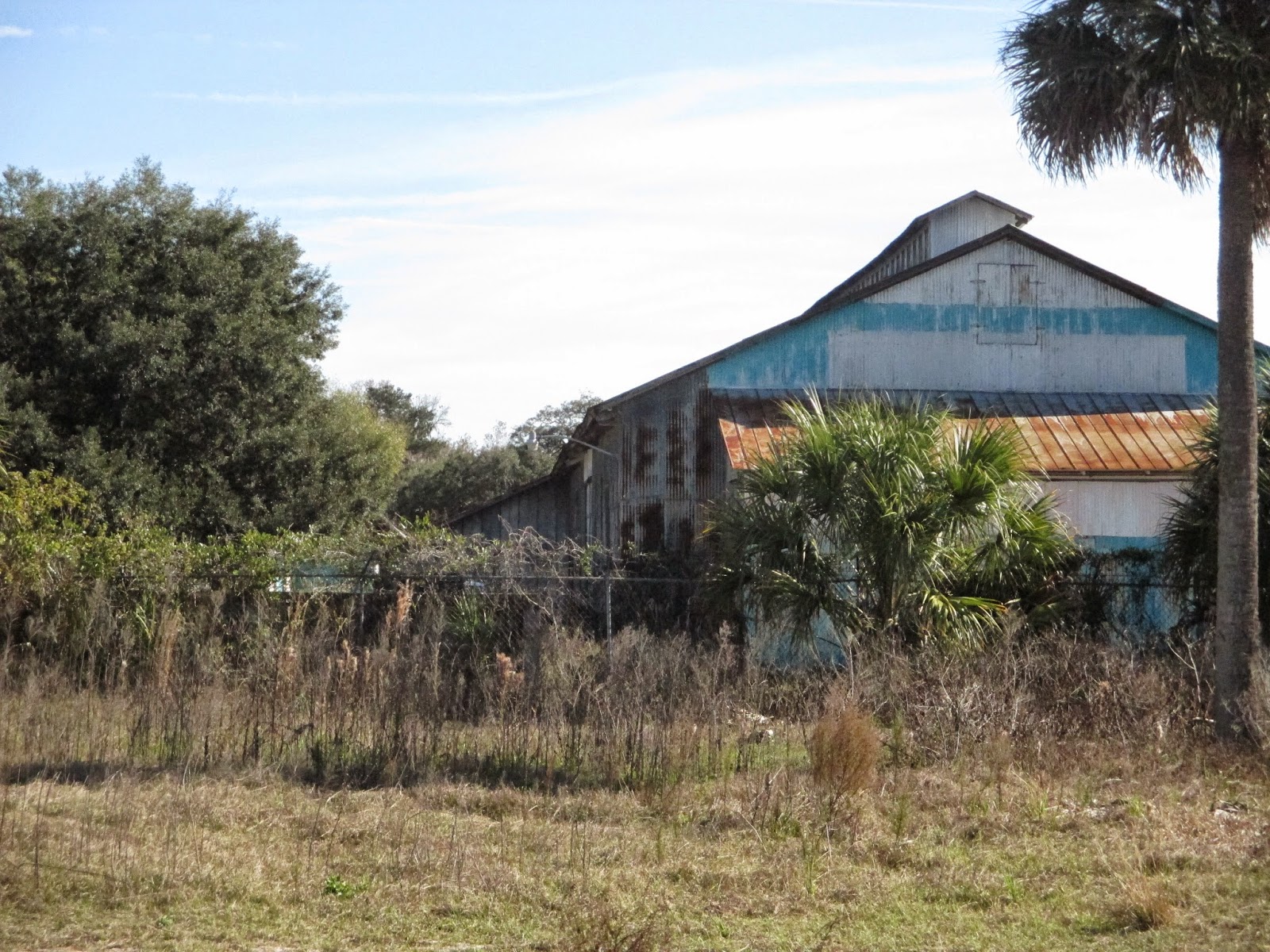 In some places you can still find two-story houses . . . 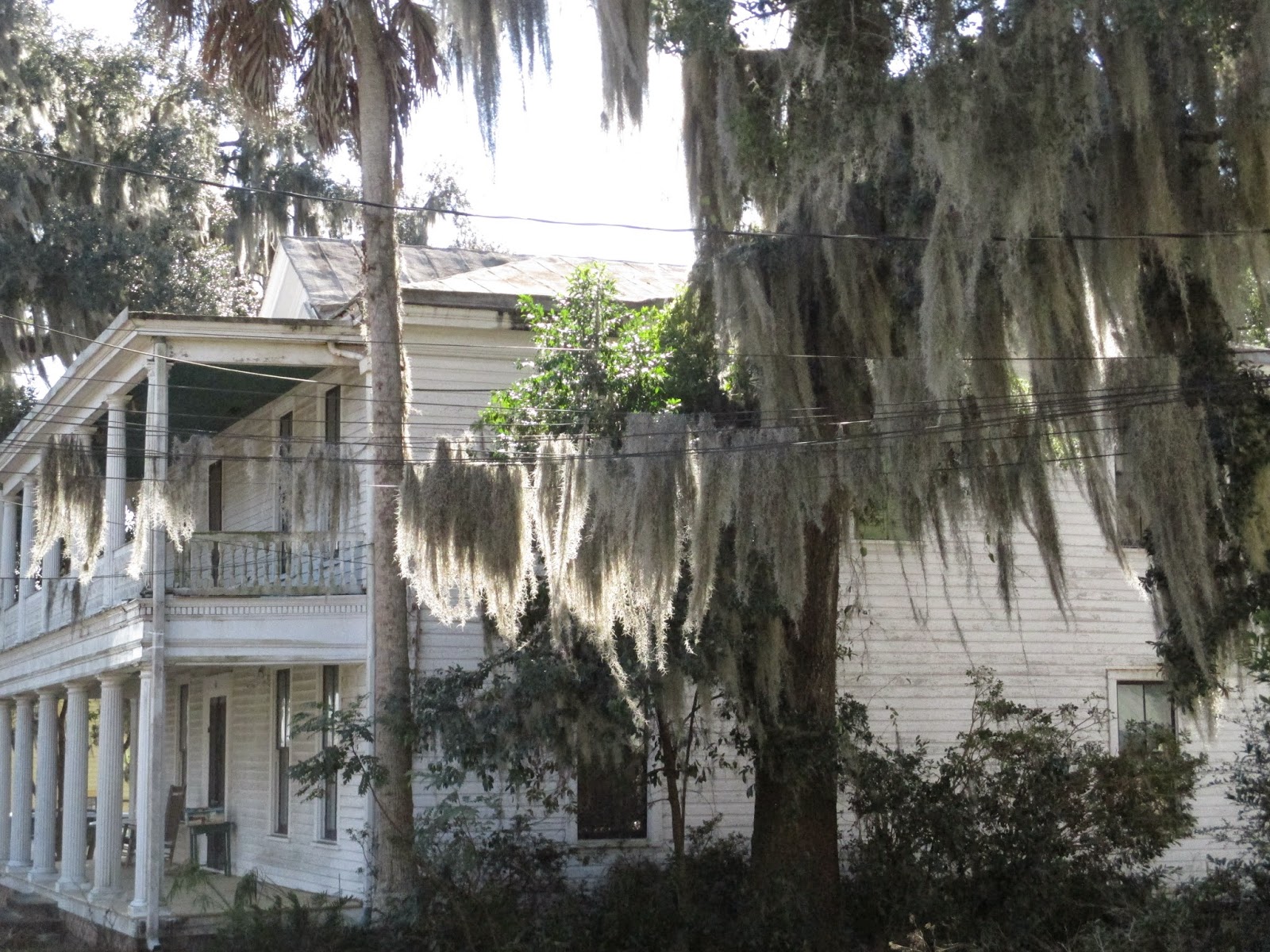 Here is downtown Palatka, FL, a small town in the center of the state . . . 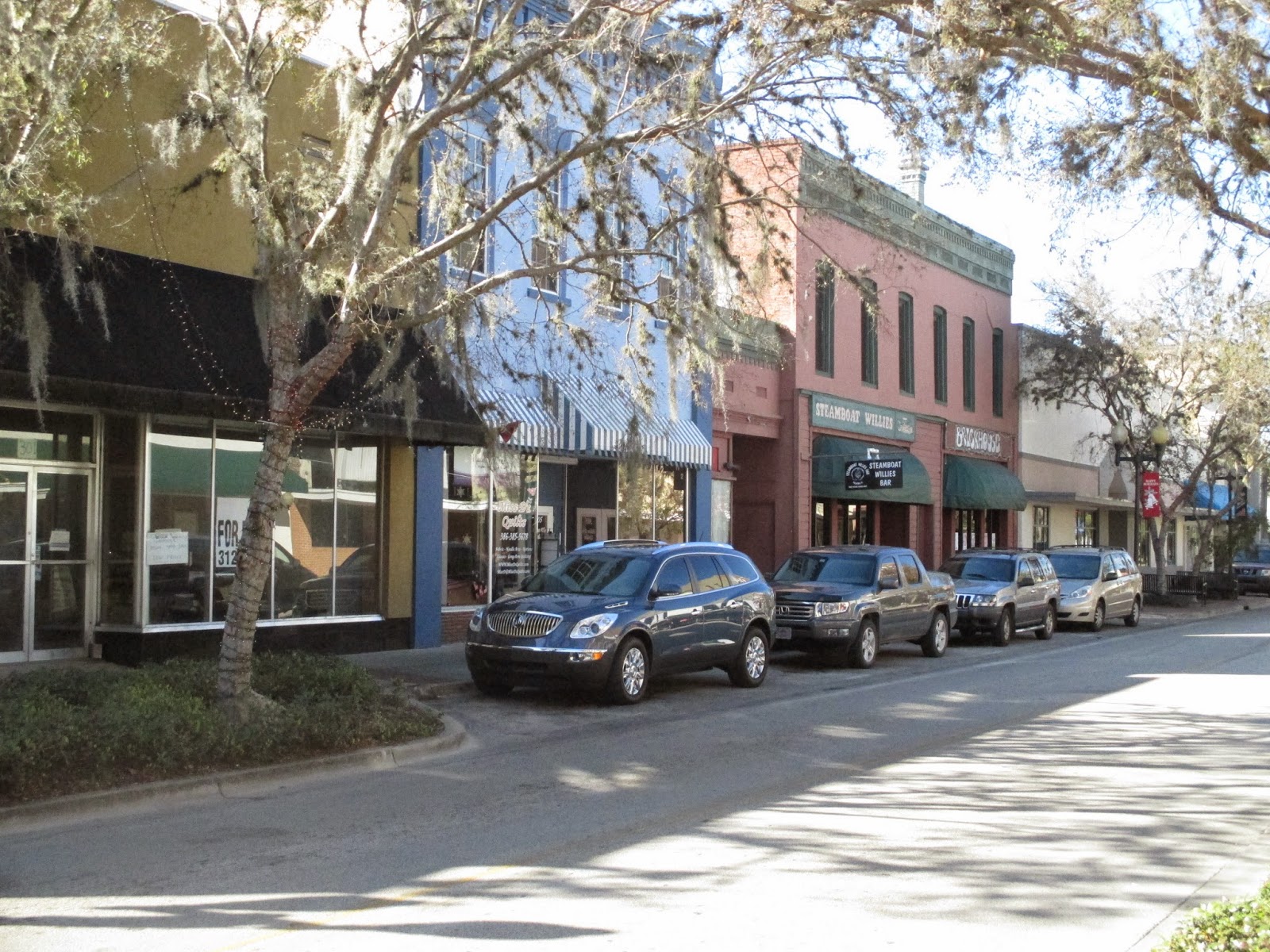 Overlooking the St. John's river, one of the few waterways in America that flows to the north . . . 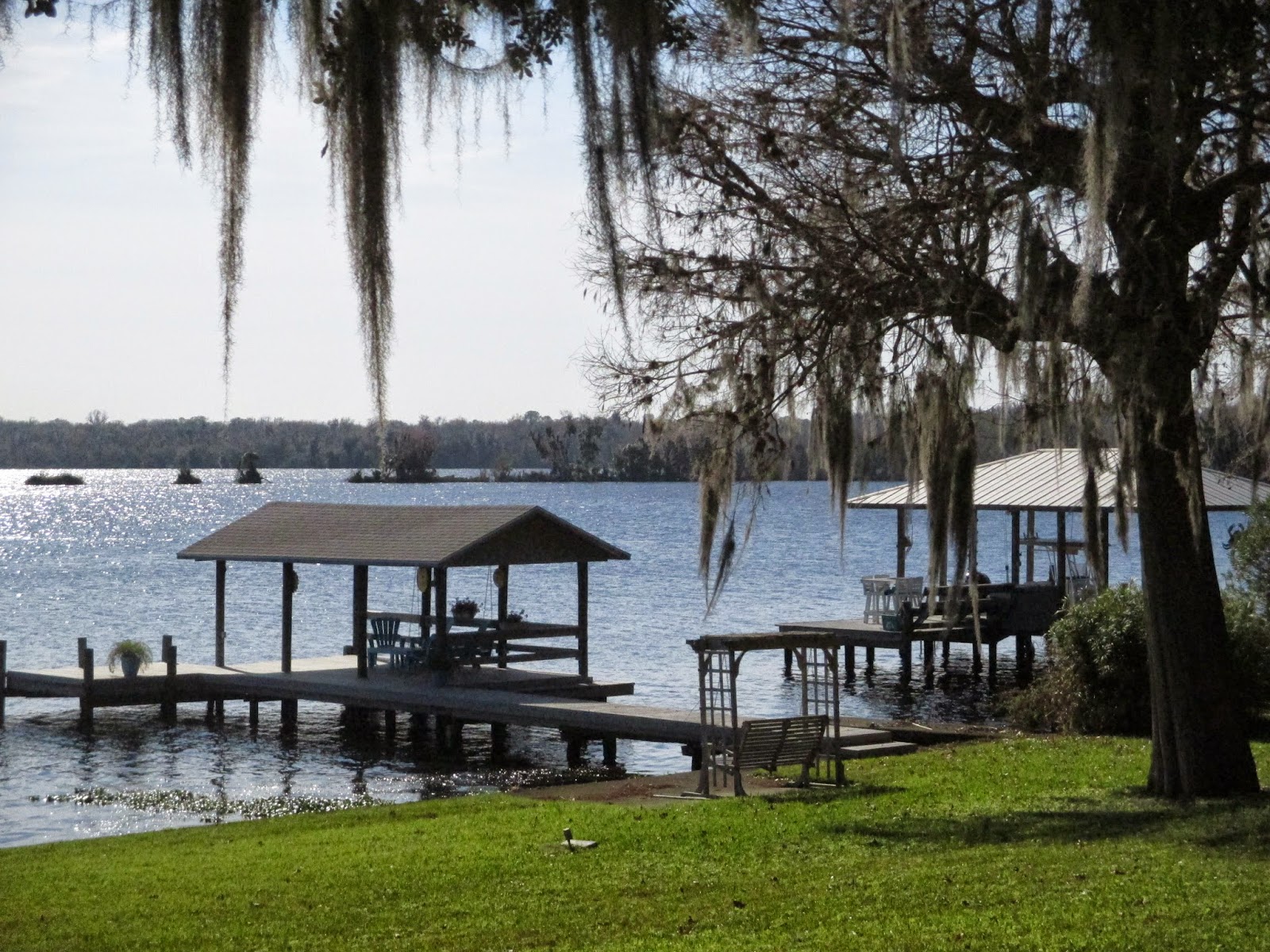 You don't see many alligators in Florida anymore, but I found one (or is it a dinosaur?) . . . 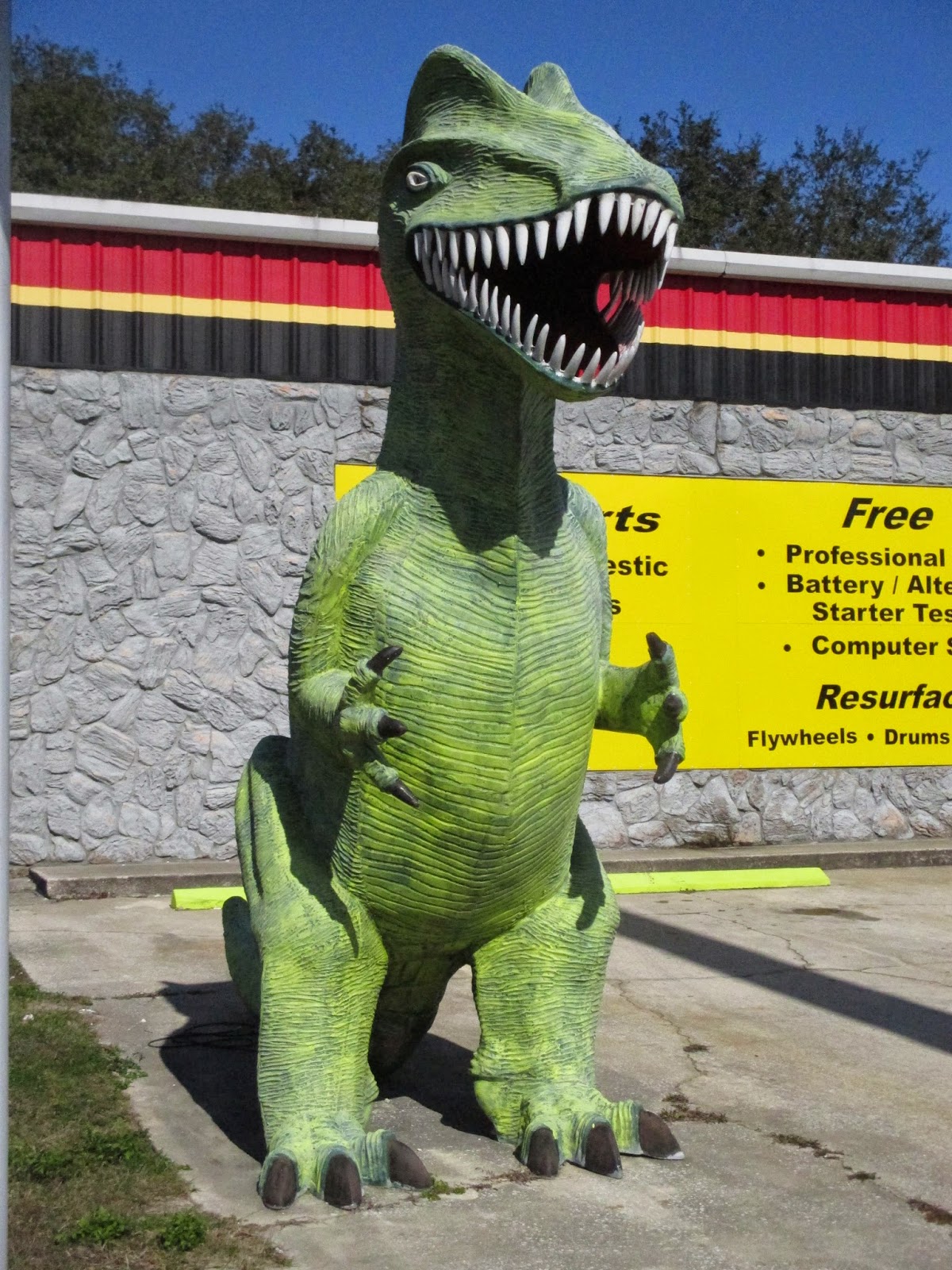 I thought this place was abandoned but discovered, much to my chagrin, that someone lives here . . . 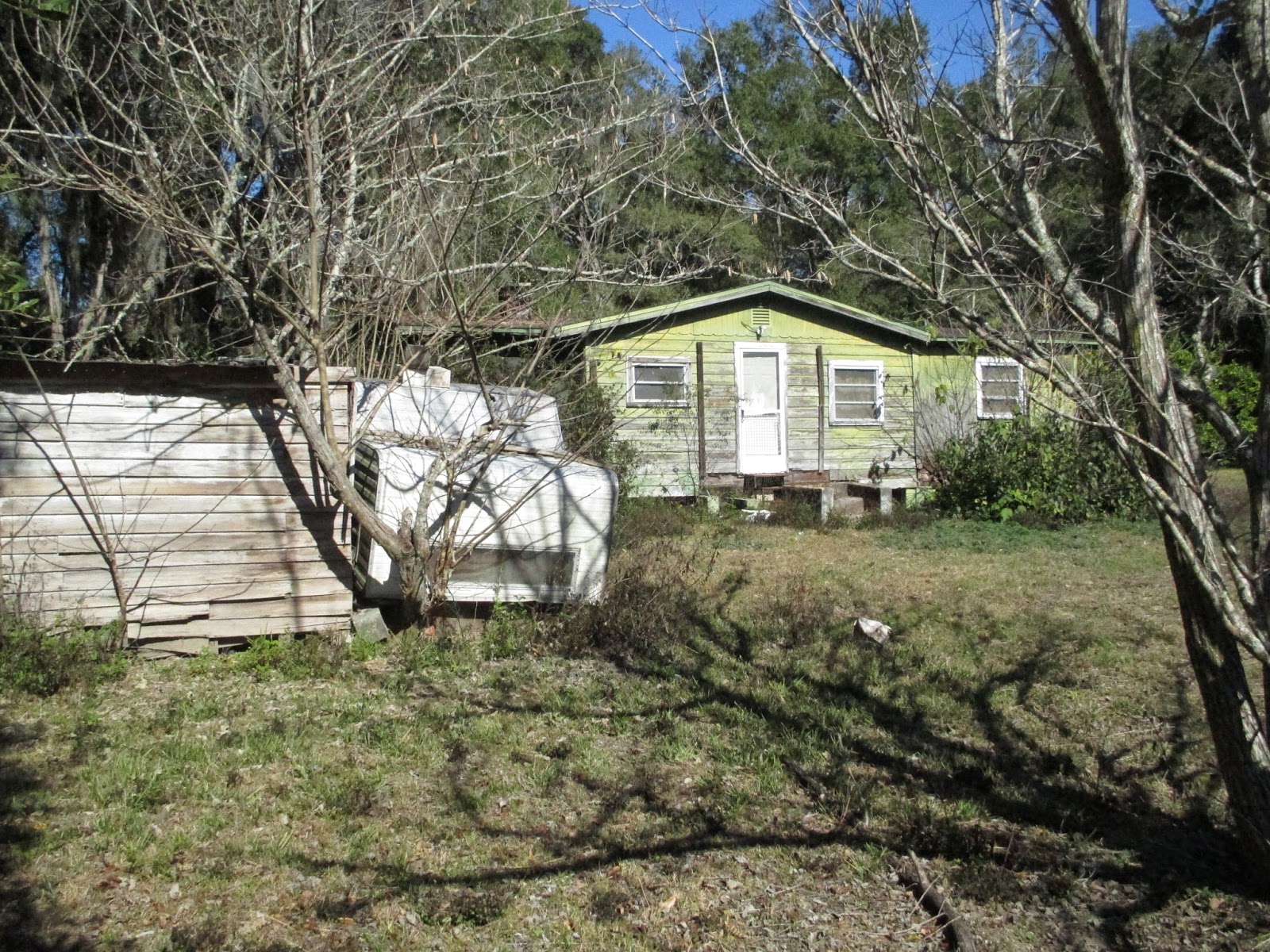 Some people in Florida worship the sun, others . . . 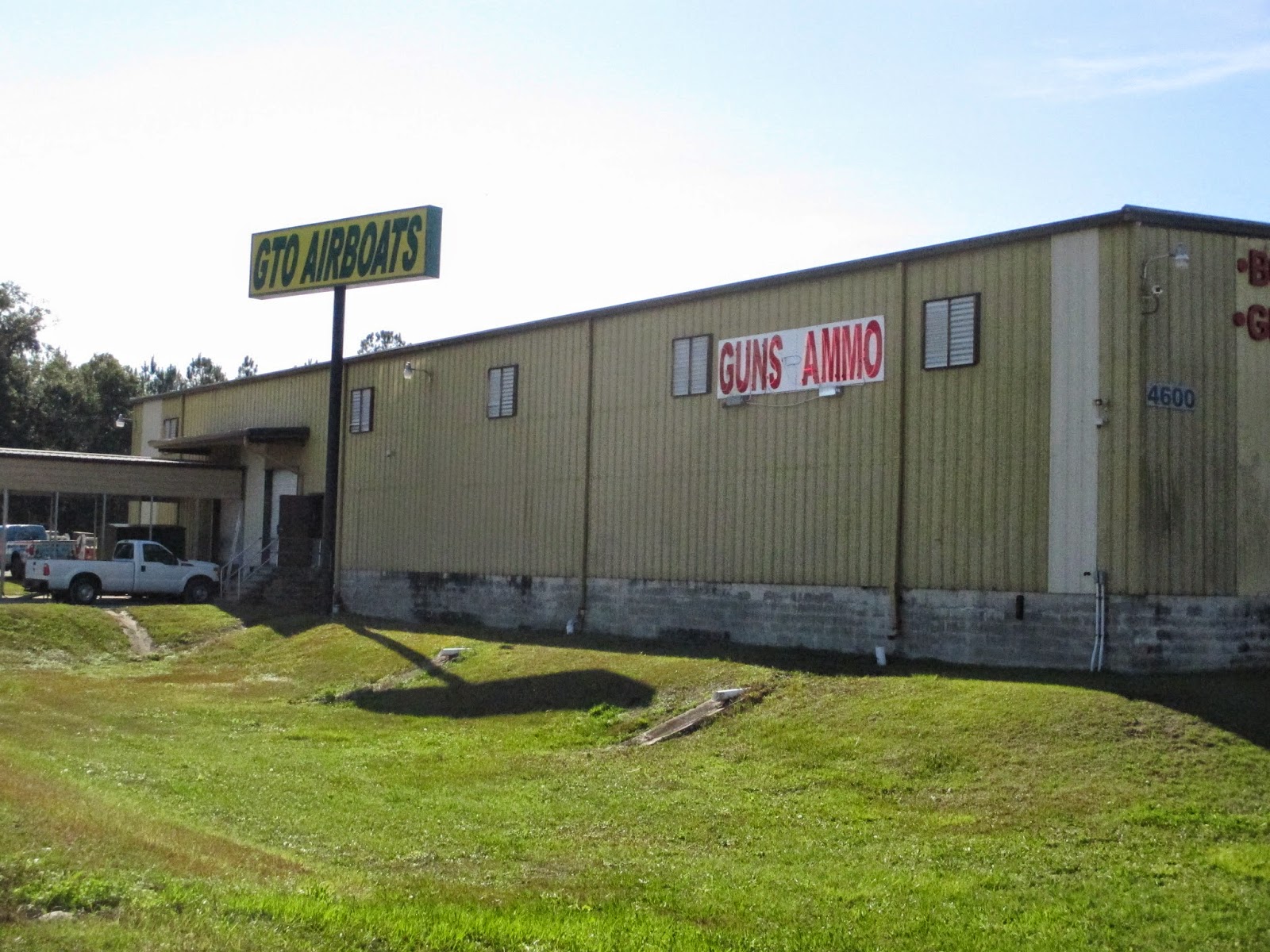 Many of the orange groves have been cut down to build developments to house all the people moving in from the north; but they still do sell oranges in Florida . . . 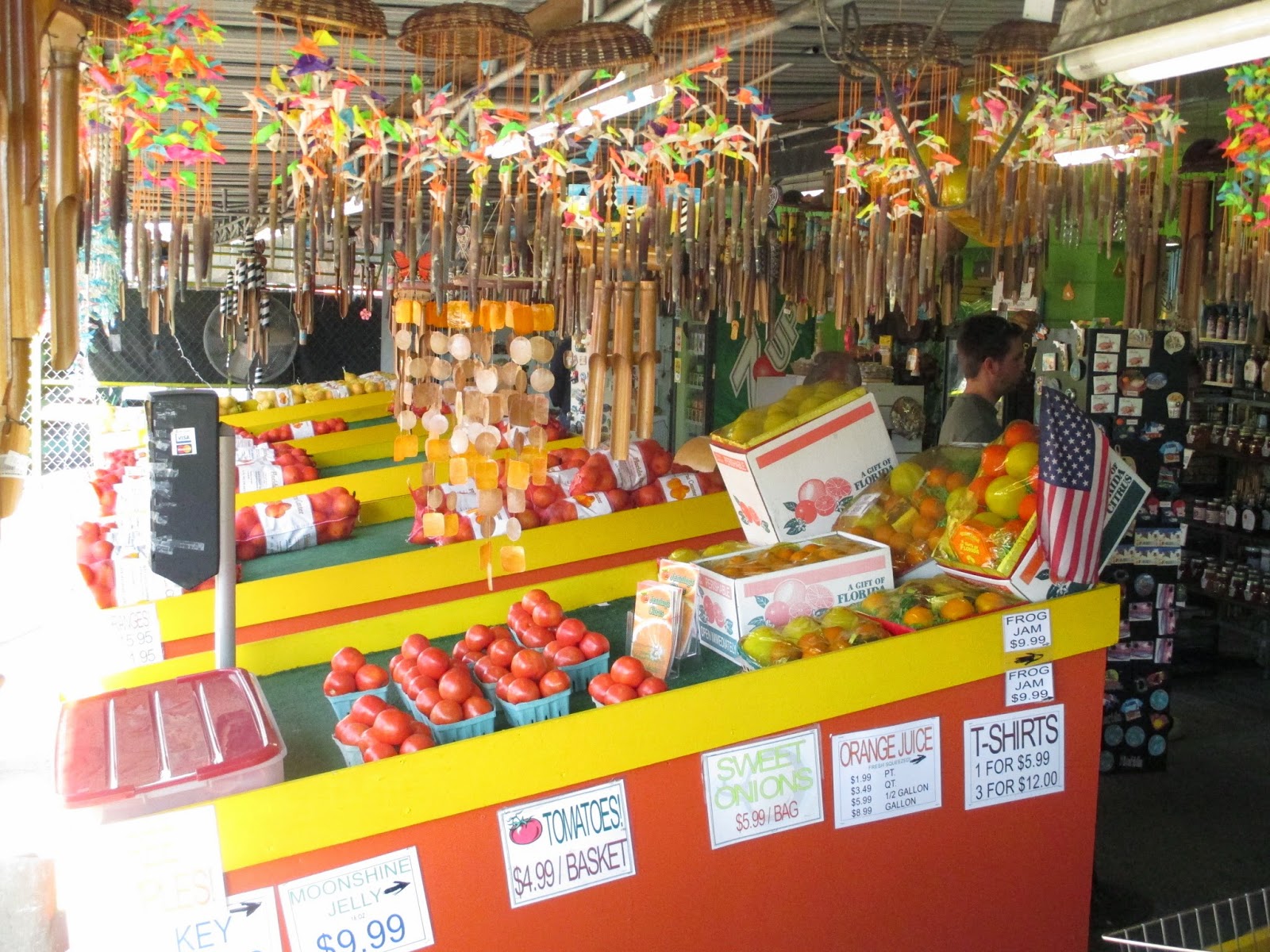 And I told you I found an alligator. Would I lie? 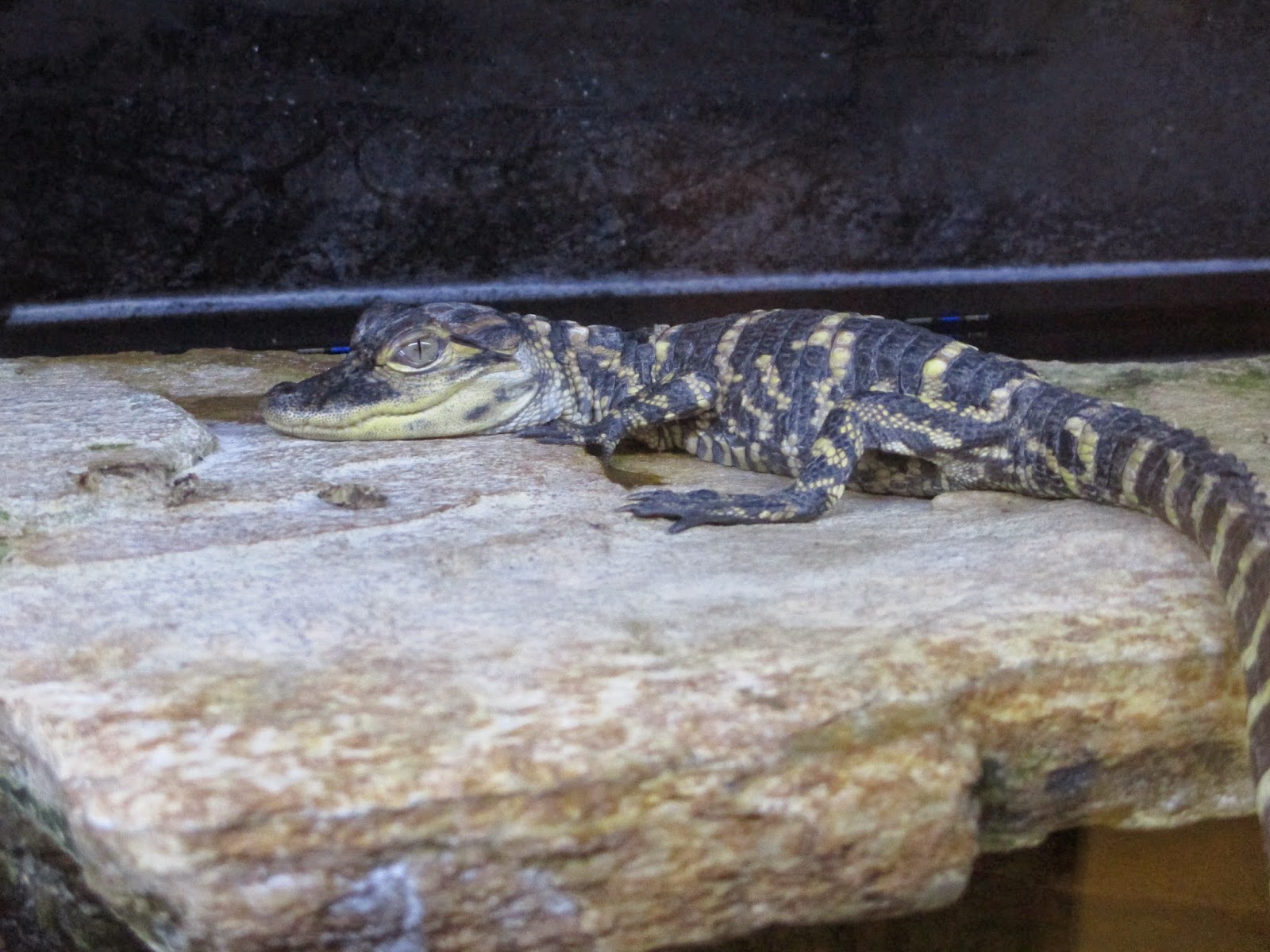 I love all these pictures, Tom, so different from your usual fare. And that Spanish moss: it's so beautiful and graces many of your pictures. You reminded me of why I enjoy visiting my sister outside Tampa. Florida is definitely a unique place. :-)

Man, look at that two-story house! A mini-Tara! I wonder why there aren't more two-story houses there. It seems as if it would be a good idea, what with the high risk of Wet Weather and attendant flooding.

The away-from-the-crowds places are usually more interesting to me. Evocative photos!

Florida has changed voluminously in the past years. The people moving in have changed it to their liking and it is no longer the interesting state that it once was. It has become a cookie cutter land.

Yes, it always intrigues me to drive into the the Florida countryside. And, really, you don't have to get that far from the coast to see some pretty dramatic changes.

I've never been to Florida, except the Miami airport, but I know people who live there, vacation there, and love it.

So what did you do at that "old abandoned house" or should I not ask?

That is not an alligator. It is, most likely, a caiman... native to Central and South America. Contrary to myth, gators are not green or mottled, they are dark gray (slate) and can be quite large. You don't want to mess with them in the spring (mating season) and avoid the females once they've laid their eggs. Since it is very difficult to tell the males from the females, it's best to just stay away from them. We don't see them on golf courses as often as we used to, either.

I don't get "when you drive from the east coast to the west coast, you travel through central Florida..."

I live on the West Coast, that's the Seattle area.

@Rita - drive from each coast of Florida.

I lived in Miami several times as a kid and after University, and my mother lived there 50+ years. Now I could happily live never going there again.

Not sure why a pic of a gun store implies 'worship' unless that's just another NY urban resident's snide comment.

My sister, who lives in Jacksonville, told me there are indeed two-story houses in Florida. At first I didn't believe her, but sure enough ...

Douglas, the lady told me it was an alligator, and so I believed her. But I'm a tourist. What do I know?

And Kirk, you are correct about the snide comment. Snide comments are not unusual on this blog, but they are presented with humility, and meant to be entertaining, not insulting. Maybe I should do a post on gun safety. I don't know much about guns, but why should that stop me. It doesn't stop anyone else. (That's another snide comment!)

I forgot to mention that Florida once had a thriving cattle industry, something few seem to know these days.

Interesting photos, and very representative of what nifty places we can discover by getting off the super highways. One little slip, Tom--the South still is a major producer of forest products. It has more forest land than any other region (about 40 percent). The South produces two-thirds of U.S. pulpwood and major amounts of both softwood and hardwood lumber.

I worked at Tyndall AFB in the early 1980s (near Panama City FL). Perhaps it has changed in the meantime; but, in flying in from Atlanta GA (which I did, frequently), I knew where we were in the pattern - by when we went through the smelly plume from each of two paper mills.

I've only been to Florida once since leaving in 1983 - I was birding in the Tampa area on 9/11/2001. I'll let you keep the whole state. (Ah, yes, another snide comment - reflecting my opinion of living in the state!)
Cop Car

Appreciated the photos and comments about the "Other" Florida. I fondly remember central FL especially—Orlando, Kissimmee, and St. Cloud area—in the pre-Disney 1950s and 1960s.