How to Stay Mentally Alert as We Age

What do you worry about more as you get older -- facing physical issues, or losing mental clarity? For me, I think it's the brain. I don't want to spend my last years in a fog, barely aware of what's going on.

We know that the brain, like everything else in our bodies, tends to shrink as we get older. It starts in our early 20s when brain cells begin to die faster than they can be replaced. By the time people reach their 80s, they can summon up barely half as much brain power as they did in their 20s.

But does this mean we have to flirt with senility when we get older, become forgetful and inevitably start fading toward dementia? I hope not. I do remember I study I saw a while ago from the University of California. It said that people in their 60s and 70s lose mental acuity as their ability to process information slows down, but they still beat out 20-somethings in many aspects of intelligence because of the greater knowledge they've acquired through experience, culture and education.

In other words, what we lose in speed and agility we make up for in experience and perspective.

I just read a book by Bruce Grierson called What Makes Olga Run? The Mystery of the 90-Something Track Star, and What She Can Teach Us About Living Longer, Happier Lives. Grierson looks at a number of senior athletes, focusing particularly on 90+ year old Canadian track star Olga Kotelko, to find out what keeps older people healthy and active and mentally acute. In poring over his advice and insights, I've isolated a few ideas for keeping our minds sharp as we get older:

Education matters. There is evidence that time spent in a classroom correlates with better brainpower, promoting habits of lifelong learning. According to the book, college graduates have denser brains than those without a degree, and brain density has been linked to a smaller decline in cognitive function, presumably because the more educated we are the more neural connections we have to back up the ones we lose. In addition, Grierson says evidence suggests that being bilingual protects people from dementia (if only I knew a second language), and the earlier the second or third language is learned, the more it protects the brain in later years. 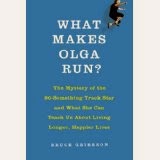 Commit to lifelong learning. Tackling crossword puzzles, computer games and other activities that stimulate the brain can sharpen cognition, especially if you have to retain certain facts in your memory while processing new information. The book recommends Sudoku for improving thinking skills, especially if you keep laddering up the level of difficulty to a point where you're consistently being challenged.

Do something different. Yes, solving puzzles and playing cards keeps you active and alert. However, many pursuits such as reading the paper or doing crossword puzzles can become routine, using familiar pathways in the brain. Sometimes stretching your mind requires you to do something different. Here's the idea: If you're right-handed, try eating dinner with your left hand. Drive a different way to the mall, or listen to a different radio station. The point is to break your usual habits, and force your brain to look at things from a new perspective.

Get some exercise. Arthur Kramer, a cognitive psychologist, recruited test subjects between 60 and 80 years old who were committed couch potatoes. He put them on an exercise program, starting with 15 minutes of walking every day, and increasing to 45 minutes. After six months, he found the subjects' brains had grown by a measurable amount, and not just in the areas where memories are stored, but also in the frontal and temporal lobes where reasoning and sensory processing take place. Meanwhile, Grierson reports that track star Olga Kotelko took a battery of cognitive exams, and tested out as someone 20 years younger than her actual age.

Get plenty of sleep. One long-term study of 15,000 nurses, published in 2012, concluded that sleep deprivation can severely impact a person's memory capability, and even shorten life expectancy by up to two years. Why does sleep matter? For two reasons: First, a sleep-deprived person has a problem paying attention and experiences difficulty focusing on mental tasks. Second, sleep itself has a role in the consolidation of memory, which is essential for learning new information.

Any of these methods will improve your brain function, but they work better in combination. Grierson cites a Mayo Clinic study of senior citizens who did brainteaser-like puzzles on the computer. That activity in itself improved their mental function. But when physical exercise, such as dancing or playing tennis, was added to the mix the seniors got an extra boost from the brain games. A study in Europe came to a similar conclusion. Researchers led one group of pensioners in cognitive training, and a second group in physical exercise, while a third group did both. On later intelligence tests, it was the third group that came out on top, with flying colors.

So I don't know about you; but I'm going to volunteer at my community college this afternoon, then this evening work up a sweat playing table tennis.

Oh, wait a second. Table tennis was last night . . . I was going to post this item yesterday. But I forgot.

Email ThisBlogThis!Share to TwitterShare to FacebookShare to Pinterest
Labels: Health, State of Mind

Great advice for aging with as active a brain as possible. I particularly like the idea of education and learning never ending.

Olga is an inspiration to all of us. I regret not being more active when younger; it would be easier to maintain an active lifestyle as I age. It is tough teaching old folks new tricks!

I am from Spanish speaking and german speaking people, I learned a little of both before my Mom passed from this earth..I love to read and learn, I walk a lot each day, I don't worry much about this and that, not much worry can do about a lot of stuff, we go to the beach to feel the sand on our feet walking, never turn our back on the ocean and enjoy our 40 soon to be marriage..Our only never has married, no kids and travels all around she seems to be happy, but she doesn't speak another language and doesn't sleep much, I think the younger generation in their quest for a real life overdue what I like to think a real life, something to hope for, someone to love and lots of people one sees all the time, the quest for material items is too strong in our society, living is not taught in school nor common sense, too bad, one can never go back in time..love your columns, ciao

I meant to say something to do each day, I volunteer and it makes me feel great, so does my hubs of almost 40 years, we don't run after anything maybe skip but run never...We are patient people and realize rome was not built in one day...I enjoy reading your blog daily & get a big kick out of your observations..Our only was in Austin for the SXSW festival she was walking from a party to celebrate the end of her work at the film place, she was ahead of that nutcase who plowed into the crowd killing 2 and critical 5 and 28 others very injured, she called us immediately, she is careful in her life, but one never knows what will happen, she never drinks, smokes anything, and keeps healthy, she worked on several films displayed at SXSW festival and was walking with a fine gentlemen back to their hotel and boom that nutcase plowed right into the crowd, drunk as a skunk, I never used to be for the death penalty but a person like that with blatant disregard for human life in my opinion fits the bill for the death penalty..ciao!!!!!!!!!!!!!!

Learning new things is the key! Pushing ourselves physically and mentally will keep us viable each decade.

As long as I can do the daily sudoku I figure I'm still OK.

Sleep. The dreams things are made of. I've been sleeping better since I lost some weight. And you know I keep my mind active. Sometimes it keeps me awake.

My biggest fear is losing my memory to a disease like Alzheimer's. I just finished reading the new book, An Absent Mind. It tells the story of the horrible effect of this disease on all members of a family. It is moving and scary, but worth the read.

I am watching others around me and notice that the brain functioning is shifting faster than most are realizing. Seems the new mobile devices held of one's head or even on one's lap have a way of changing the ability recall events and that is not a good sign.
Seems you have opted to monetize your blog. I see ads.

I worry about dementia a lot, and hope I can evade it.

Nothing is absolute. You can rely on statistics, though, to improve chances.

My mother had an active mind and a great memory, she used these throughout her life yet still ended up with probable Alzheimer's in her mid-60's. She wrote short stories, she invented games, she did lots of crossword (and other) puzzles but she went downhill mentally. Fortunately, she retained her personality throughout the diminishing of her mental ability... which made it easier to care for her.

My point is that we can never know what is in store for us. It does not hurt to keep the mind active but I think the lesson of Olga is that exercise makes a measurable difference.

I enjoyed reading your article. Please make more interesting topics like this on.
I'll come back for more :)

From Japs a researcher from Beddingstock gel memory foam mattress