How to Feel Better in a Few Easy Steps

Last Sunday I was not feeling all that well. There was nothing really wrong with me. I got out of bed in the morning as usual, had breakfast, went to the computer for a while. But my stomach was a little upset, and I was tired and listless.

By the way, I'm warning you here that this is an R rated post -- not for sex or violence, but for bodily functions. Okay ... don't worry, I said R rated, not X rated. It's not that explicit!

I didn't have a cold, or any kind of stomach bug. I just felt kind of lousy. So after I sat at my computer for a while, checking email, doodling around, I picked up the paper and read the news, the opinion page, the arts section. Then I wandered back to my computer, feeling no better. I felt bloated, and -- here's the R-rated part -- seemed to be having problems with gas building up in my system, a problem I usually don't have. I try to eat well, and don't consume too many fats and heavy foods, because I hate to have my system all blocked up and bloated. And it wasn't just that, either. I had a headache, too, and . . . I don't know, by mid-afternoon I was just disgusted with myself.

Honestly, I was kind of bored, too, sitting around the house all day. I fell onto the couch and turned on the TV and watched a football game for a while. I must have really been at loose ends, because I'm not much of a football fan.

Later in the afternoon B reminded me that there was a dance going on that evening, and she wanted to go. We go ballroom dancing every once in a while -- she's even signed us up for a class that meets every Tuesday night at our local middle school. We hadn't gone to a dance for at least a month, and this one was supposed to be at a nice venue.

The last thing I wanted to do was go dancing. I'd spent the day perched on a chair, or plopped on the couch, and I was perfectly content to sit out the rest of the day and do nothing but ... feel lousy.

But B had mentioned this dance a few days ago, and I'd said I would go, so unless I was prepared to plead some kind of real illness, I thought I had to step up and do my part. 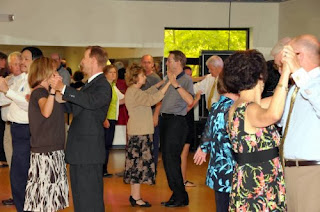 She fixed us a light, early dinner. Some soup and half a sandwich. I also went down to the basement and got myself a Coca Cola. I try to stay away from soft drinks. But I have in my mind, from a long time ago, that Coke is one thing that helps settle the stomach.

B insisted I dress up into something a little more presentable, and I doused myself with a a few splashes of cologne to take care of ... you know, any potential problem in that area. And off we went.

We arrived at the dance. The music was playing. Couples were out on the dance floor swaying and swirling across the room. So B and I walked out and began to step and turn and twirl. We saw a few people we knew. There was a 30-minute lesson teaching us all a new waltz step.

The dance went from 6 p.m. to 10 p.m. We left early. B and I always leave early; we are not night owls. But when we got home, about 9 p.m., I realized I'd forgotten about my stomach and my headache. I was actually feeling pretty good. Good enough to go out and walk the dog, then come in and share a cup of tea with B.

A little while later I went to bed, and slept soundly through the night, waking up bright and chipper in the morning.

So what's my point? If you're feeling a little under the weather, nothing serious but just not feeling your best, what's the cure? Well, maybe drinking that Coke helped me out. But I think what really made the difference was pulling myself up off my butt, going out to meet a few people, getting a little exercise . . . and taking me out of myself for a while.

It's the light exercise that is the key. Nothing extreme. Just walk around the block; play a round of ping pong in the basement; shoot some basketball hoops in the driveway, spend 20 minutes with an exercise video ... or go out dancing for the evening.

You are right about this. Get the body moving.

Glad to know you felt so much better after the dance. I sometimes have the same thing happen to me. If only we had two of us and could compare the difference in how we feel if we do one thing or another. :-)

I prefer Ginger Ale (something my mother swore by for stomach "issues") to Coke or other carbonated drinks... or, better yet, Tonic Water. But, yes, getting out and doing something will turn that blah feeling around. It's why I often play golf even when I am not feeling well.

"But I have in my mind, from a long time ago, that Coke is one thing that helps settle the stomach."

Far be it from me to knock whatever works for you; but, I think you are a bit rusty on the folklore. It is coke syrup that doctors used to have their patients take for nausea. Me? I'll sip a coke to keep you company. *smiling*
Cop Car

I think it was in the news recently that Chinese scientists did a test and 7-Up settles the stomach best, at least if you have a hangover.

Ha Ha David thinks Coke cures. We overdid it with walking yesterday. Now I am paying the price. Dianne

Sometimes the absolute best thing I can do for myself when I am feeling sluggish is to get moving, no matter how much I don't want to lift a finger. Most of the time it makes a huge difference and if it doesn't, oh well. Back to the couch.

Sometimes if I'm feellng iffy before a run, I tell myself that I'll just go for five minutes and if I still feel bad, I can come home. But I always keep running once I start, and feel better afterwards. :)

Drinking plenty of water does make a big difference both for overall health and the feeling of vitality.