Who Do You Need to Forgive? 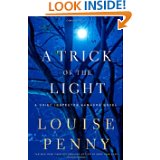 B recommended Louise Penny to me a few months ago -- she'd heard about her from a friend at the library. Penny is a Canadian writer who has developed a series about Chief Inspector Armand Gamache and his trusty assistant Jean Guy Beauvoir, who work out of Montreal and solve mysteries in the far north.

I read The Beautiful Mystery, about a murder in a monastery. And I just finished A Trick of the Light, which involves an artist who finds a childhood friend lying dead in her garden.

I recommend Penny to anyone who likes stylish mysteries. But what stopped me was this poem offered by a character in the book, as she gazed over the scene of the crime:

"You're lying on your deathbed.
You have one hour to live.
Who is it exactly, you have needed
all these years to forgive?"

I was raised a Catholic, and forgiveness was an issue that loomed large in my youth. So this made me wonder, who do I need to forgive? My parents, perhaps, not because they were bad parents, but because they were not perfect. My ex-wife? Nothing to forgive. Old school friends or work colleagues? Yes, there were some issues, but nothing worth a minute's thought on the deathbed.

It's an interesting question. I think we forgive because we feel a need to be forgiven (which, in a way, you touched on).

I have forgiven all those in my past that I thought deserved forgiveness from me. The others? Well, let's just say I never saw contrition or regret on their part so they have not sought, nor deserve, forgiveness.

I think we all need to forgive ourselves before we can truly forgive other people and let go of the resentment. Resentment is just poison.

I suppose I'd forgive my brother for deciding I wasn't worthy of being in his fabulous life anymore, for walking out on his obligation to our parents and leaving me to bury Dad alone.

I have been a mystery fan since Nancy Drew and the Hardy Boys, so I will check out Penney on my next library trip.

I could not have written anything better about forgiveness. Maybe it is the recovering Catholic thing?

And because you are an English major you know that Hamlet is about forgiveness, or the result if you don't. Dianne

I'm a big mystery fan also and will check out Penny on my next library visit. As for forgiveness, I agree with you. There are probably many incidents where I could have behaved better. For those who have done me wrong, I've let it go. I haven't forgotten, because there are several that I would never trust again, but they are people who are out of my life.

I have an old friend who annoys me every time we see each other. I'm not ready to give up the relationship, though. I need to be willing to forgive the annoying traits, instead of hoping she'll change after all these years.

Self-forgiveness is the biggest battle for me! I need to forgive myself for getting into the wrong relationships and simply being a human being trying to do my best, but constantly doing things wrong anyway.
Thought provoking Tom. Thanks!

A fascinating question, Tom, and so important. Forgiving ourselves and others frees us to live fully every day of our lives. Thanks for the reminder!

All forgiveness, I think, is essentially forgiveness of ourselves. Thanks for the tip--I love mysteries and will check out this author.