It's a busy week. Today is Chinese New Year. Tuesday brings us Mardi Gras. And Thursday is Valentine's Day.

You're never too old for love, but it doesn't seem that love is front-of-mind for Baby Boomer bloggers. In this February Best of Boomer Blogs, Katie Foster, a proud foodie, waxes poetic about her ... love of food. She loves to shop, loves to cook, loves to eat, and she takes us on the scene of The Battle of the Chefs, featuring top chefs from the top restaurants in Dubai. 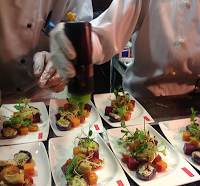 Laura Lee Carter reminds us that Baby Boomers are the first American generation to grow up  in a world inundated with ever increasing manipulative advertising. Our parents had radios, but we witnessed a virtual explosion in technology in our lifetimes, all designed to reach us with ads wherever we are. We're the first generation Engineered to Consume.

(And we do love those Superbowl ads, don't we?)

Lisa Froman tells us that humility is something we may become well acquainted with at midlife. Learn more about midlife and humility at Tao Flashes -- which may include some teachable moments involving 20-somethings and learning experiences involving hashtags.

Speaking of love, on the Survive and Thrive Boomer Guide, Rita R. Robinson, consumer journalist, writes about a survey that shows more couples fight about a messy house than money. However, there are two things that most couples agree on. The things that drive them the most crazy are misplacing keys and bills.

(I don't know about your household, but in our household we agree on something else: We agree that you are messier than I am.)

Finally, John Agno in his post Generation Squeeze, reports that the Labor Department's latest jobs snapshot acknowledges that all Americans have suffered from the recent economic troubles, but presents a strong case for crowning Baby Boomers as the greatest victims of the recession and its grim aftermath.

To which I say, Aftermath? That would suggest the recession is over, wouldn't it? But maybe we need to get past all that -- for it's the year of the snake, and the snake is known for its financial acumen, perhaps indicating we should no longer worry so much about money.

I know quite a few people who are altering their retirement plans because of the financial downturn. Healthcare costs seem to be one of the biggest concerns.

Year of the snake or not, this fiscal issues will not go away anytime soon. The national debt has only grown worse over my life time, and like the bomb is here to stay I fear...especially as two different fiscal philosophies dominate politics.

Boomers may have suffered in recent years along with everyone else, but at least they had the booming 1990s and 2001-2009, despite wars and crippling entitlement spending. The poor kids coming of age today have far less and they will bear the burdens of the future, long after the last baby boomer is dead. Dianne