“The trouble with the rat race is that even if you win, you're still a rat." -- Lily Tomlin

A Mea Culpa for Christmas

B's family is arriving tomorrow, two days earlier than originally planned. They will leave on Monday, the 26th -- as opposed to what I'd feared, which was that her family would arrive on Christmas night when my own two kids are coming for a visit, and the whole crowd would overlap for three frazzled, frustrating days.

B and I do not have a blended family. We have two separate families. We each had two kids from a previous marriage when we got together in our 50s. Our kids were mostly grown up by that time, and we have never all lived together as a family. So, while the two sets of kids are cordial to one another, they have never really bonded. They have different interests and different friends.

Meanwhile, B has a whole pack of siblings. My kids have met a few of her relatives, but not all of them by far.

So now, anyway, the whole big crowd will overlap for only one night. B's family, now that they'll be here earlier, will actually have beds to sleep in. And when my kids arrive, at least after the first night, they will not be forced to share the beds, the kitchen, the couches and the TV with B's herd of relatives.

B talked to her sister a couple of days ago. They rearranged the visit -- and I know B did this primarily for my benefit, and so first of all, a big apology for ever thinking she had a selfish bone in her body. And a big thank you for empathizing with my familial concerns. And I'm left to ponder: Who's now proved to be the selfish one?

Part of the reason B rescheduled her sister's visit was because B has to work the week after Christmas, or most of the time her sister and mother were originally going to be here. And part of the reason is ... well, I think she took pity on me.

I woke up Tuesday morning, and my back felt a little out of sorts. In the afternoon I had to run some errands. So around 2 p.m. I went into the garage, opened my car door, slipped into the driver's seat -- and something snapped in my lower back.

My pain level jumped from an uncomfortable 2 or 3, to a debilitating 7 or 8. I limped upstairs, grabbed a couple of aspirin, then went back out to the car and drove off to do the errands that had to be done. Three hours later -- about 1 1/2 hours sitting behind the wheel -- I pulled back into our garage, crawled out of the car and made my way into the house. I spent the entire evening popping aspirin, sitting in my chair that has an electric massage attached to it, and moaning and groaning in front of the TV.

I was trepidacious about going to bed. But I found that the back was okay as long as I lay on my side. I nodded off, but woke up around 4 a.m. and could not get back to sleep. I went downstairs, heated up some milk, read my book for a while. I returned to bed around 6 a.m. and managed another hour or two of sleep.

At breakfast B asked me what had gotten me up in the night -- my back?

"Yeah," I lied. But the truth is, I was really lying awake worrying about the awkward family gathering I was facing in a few days time.

I switched my painkiller from aspirin to Advil. Seems to work better for the back. I spent the morning doing some light stretching, sitting in my massage chair and walking slowly around the house. My back hurt if I sat for too long; but it got tired if I walked around for too long. So I alternated between the two.

Before she left for work on Wednesday, B showed me some back exercises -- which I did several times throughout the day. Also, I took a long hot shower, and went to the mall for a back massage from the Korean lady who has a chair outside the food court. By the time B got home for dinner, I was feeling better. But B already felt sorry for me. She had called her sister and rescheduled her family visit.

In the meantime, I appreciate the advice I got as comments to my last post -- especially the ones reminding me that it's a lot better to experience a few family difficulties than it is to spend Christmas alone. 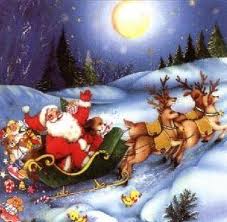 I feel a little guilty that I complained and sulked until B decided she had to change her plans. (But, believe me, I wasn't faking about the back.) I think she'll be able to enjoy the visit with her family more this way, though, since she won't be working while they're here. I also feel bad because her family will have to leave really early on the day after Christmas -- her brother has to work later in the day. But all in all, I believe things will work out better this way. At least, I hope so.

Meanwhile, I think I hear Santa loading up his sleigh. I wonder if it's too late to add one more thing to my Christmas list.

The pain had ebbed a bit when I got out of bed this morning. Maybe it will be all better by Christmas day. In the meantime, Merry Christmas to all, and to all a good night!
Posted by Tom at 9:49 AM

Consider getting one of those gravity boot things. You know, where you strap your feet into what looks like ski boots and then flip upside down? Stretches the spine and eases the pain considerably. Not that I have one of those but I do have the old lower back injury issue and I just grab hold of the top of a doorway and hang there for a few seconds... ah! sweet relief!

Have a Merry Christmas anyway. Enjoy the family

The stress caused your back to go out. Trust me.

I knew this would all work out. It always does. Meanwhile, take care of your back, you only have one back you know. Hope things go well over the holidays.

I know what you mean about unblended families. My kids have accepted David as a "dad" (their own dad is a raging alcoholic). David's kids have never accepted me, however. They don't have much interaction with David either.

Life is strange, isn't it? Dianne

Tom, I'm so glad that the holidays are turning out to be more enjoyable and manageable than you had imagined -- thanks to B's rescheduling and several co-operative work schedules. I hope you and your whole diverse "unblended" family all have a wonderful holiday!

You shouldn't feel the need to apologize just because you wanted everyone to be as comfortable as possible while visiting you over the Holidays. It seems like your wishes were getting lost in the shuffle there for a while, but it looks like your wife finally caught on to what was happening and saved the day. Good for her. Take care of your back and if it doesn't get much better hilistemI have a few remedies that might help. Most of them are legal.

It wasn't your pouting that got the schedule change, I think it was a Christmas angel. I hope you and all your family have a great Christmas.

Somehow, I knew things were going to work out for you. Merry Christmas!

I haven't had a Christmas since '01 where I didn't hurt myself--the stress, the cold, etc.--except for last year. That was the year nothing was lining up right for visits to or from our house. So we tried the empty Christmas, the one people swore was so awful, just 'cause we're too curious for our own good. It was awful, but pain-free. Some choice, huh?

I guess you've experimented with heating pads, but have you tried cold packs? The ones I buy come in different sizes and are as flexible as a heating pad. They have blue liquid inside that maintains the cold. I keep a few in the freezer.

Thanks for the great site sbo
suggestion, Tom! It's a great idea and I'll pass the info on to other family members. As for what's going on in Washington sbobet

This is another testimony on how Chief Dr Lucky cured my HIV disease. Do you need a cure for your HIV disease? Do you want to be cured from your cancer disease? Or you want to be free from any type of disease. Kindly visit his website https://chiefdrluckyherbaltherapy.wordpress.com/ . He just cured my HIV disease and I’m very grateful to him, he is the only herbalist that can cure you.
WhatsApp number : +2348132777335
Via Email : chiefdrlucky@gmail.com
Thank you all for reading,
God bless"

I'm 40 years old female I tested genital herpes (HSV1-2) positive in 2016. I was having bad outbreaks. EXTREMELY PAINFUL. I have try different kinds of drugs and treatment by the medical doctors all to know was avail. Six months ago I was desperately online searching for a helpful remedies for genital herpes (HSV1-2) cure, which I come across some helpful remedies on how Dr OYAGU have help so many people in curing genital herpes (HSV1-2) with the help of herbal treatment because I too believe there is someone somewhere in the world who can cure herpes completely. At of the past 2 months, however, I've been following his herpes protocol Via oyaguherbalhome@gmail.com or +2348101755322 and it stopped all outbreaks completely! To my greatest surprise I was cured completely by following the protocol of his herbal medicine . Don't be discouraged by the medical doctors. There is a cure for HSV with the help of herbs and roots by a herbalist Dr call Dr OYAGU he is so kind and truthful with his herbal treatment, kindly contact him for more information Via oyaguherbalhome@gmail.com or WhatsApp DR on +2348101755322 or visit his website https://oyaguspellcaster.wixsite.com/oyaguherbalhome you will be lucky as I am today