What Happens After Covid

My wife B started feeling bad a week ago Wednesday. She decided she'd better test for Covid. And sure enough, she was positive.

The next day I felt a tickle in my throat, and some sniffles. I figured I'd better test as well. Also positive.

B is about as healthy as anyone can get. Her mother lived to age 103 -- and B expects to do the same. She has the luxury of not believing in doctors, and rarely darkens the door of a medical office. She gets a checkup about half as often as she should, and when her blood tests come back she clearly qualifies for the honor roll.

But this disease soon had her lying in bed, sleeping most of the time.

I am more fragile. So right away I called my doctor's office. They arranged a personal exam by Facetime.

I was amused when the doctor appeared on screen with a mask on. Was I that contagious, so contagious he could catch it over the airwaves? No, my guess is he just wears a mask all day, doesn't bother to take it off.

Anyway, given my age and gender, he prescribed an antiviral for me -- "to be on the safe side." I got curbside pickup at CVS and took my first dose:  four capsules of a drug called Milnupiravir. Otherwise, the doctor told me to just take it easy, don't go out in public, and call him if it gets worse. 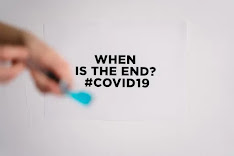 Meanwhile, I prevailed upon B to call her doctor, which she finally did. She's younger, and much more female than I am, so her risk profile is lower. The doctor told her only to take some extra vitamins, especially vitamin D and C. So that's what she's been doing.

B spent two days in bed, sleeping most of the time. I didn't feel that bad (perhaps because of the antiviral?). I had a stuffed up nose, a hacking cough, and did feel kind of tired. I didn't stay in bed all day, but I was taking a nap in the afternoon -- something I don't normally do. So for the past ten days I've spent most of my time lying on the couch, sometimes reading a book, sometimes watching the U. S. Open.

Now my course of antivirals is over and done with. We're both feeling better; but also, we both still have lingering symptoms. A cough, the sniffles. And as hard as we try, we can't get through the whole day without taking a nap.

Yesterday a friend of ours dropped off dinner for us. He left it at the door. I went out when he was back to the driveway and said thank you. We talked for a minute, and he mentioned that his daughter got Covid last spring. She had pretty much the same cold-like symptoms that we have. And yes, she'd felt the lingering fatigue. "It dragged on for about a month," he said. "She just kept feeling tired. But then one morning she woke up, and it was gone. Just like that."

Today, we were feeling pretty good, so we tested again to see if we might be clear. Nope. We still tested positive.

I trust that one morning we'll wake up, and it'll be gone. I hope it doesn't take a month.

Very glad you're feeling better Tom, and your wife too. I had covid twice, and the first time I DID have that extreme fatigue for around a month. Just brushing my teeth and taking a shower took everything in me, I'd lie down and couldn't get up. The important thing is of course, you didn't wind up in the hospital. Someone I formerly worked with retired in June 2020, contracted covid in July 2020 and died that September. Talk about unfair...

It's individual, depending on one's immune system.
The thing is not to get the virus in the first place (mask, mask, mask) as its particles might remain in the body causing long-term effects.

So glad you two are feeling better but so sorry about the lingering fatigue.
What do people do who have to work? They can't nap. Hope you have one of those "gone just like that" days soon.

It does seem to depend on your immune system... and your general health. But if you are vaccinated, getting lots of rest, and keeping your doctor updated, you are doing pretty much everything you can. I hope you both recover soon and without any long lasting effects. But I would continue being masked for a while... it isn't through with us yet.

Glad you are feeling better. The positive test doesn't necessarily mean you still have covid. When I had it back in April my local health department called to talk to me about my symptoms and quarantine period. At the end of the call he asked if I had any international travel planned and I did. They sent me a letter of recovery effective after my 10 day period. He said lots of people were testing positive months after having covid and getting stuck in other countries. With it I was able to travel to the country we were visiting and back into the US without taking a covid test which both required testing at that time.

Here is an article that talks about why this happens. https://globalnews.ca/news/8709897/covid-travel-test-positive-pcr-rapid-omicron/

I'm 68, and tested positive while in England this summer, despite having had four vaccines and being careful. I got VERY sick, and was still testing positive until Day 16. Apparently, one is not contagious at that point, though I still felt lethargic and had an annoying, lingering cough - which my doctor suggested could be helped by Sudafed (and she was RIGHT!). A month altogether. Good luck, and best wishes.

Hoping you both feel better soon!

Doug -- Sorry about your colleague; we've lost a lot of good people, esp. before the the vaccinations came along. Anon ... we've heard lots of different theories on when we'll no longer be infectious ... 5 days, 10 days, 14 days. Nobody seems to know for sure. We ourselves have not been out yet (we're 10 days from first symptoms; right now our symptoms are mostly but not entirely over); and when we do go out we will be careful to wear masks.

I'm so sorry you are both struggling with this, but glad it's getting better. I have so many friends whose family members have gotten sick. My daughter caught the virus on the airplane when returning home to Illinois from Hawaii. She quarantined in a room for over a week before testing negative. I'm looking forward to getting the Omicron booster... perhaps in November because we have a trip in April. I'm very nervous about this.

Glad to hear you're feeling better. I get the new variant booster on Tuesday, and I will continue to mask when indoors in stores. :-)

Sorry to hear this but glad you are both feeling better. I remember all the 2020 angst about "returning to normal." So we still wait and take precautions. (Even masking ofr video calls!)

Everyone reacts differently to this virus. My son was pretty sick for 8 or 9 days and tested positive for another 5 afr that. He has a baby, so they were being super careful.

Oh my, hope you’re both doing better. I’m planning on getting the booster in the next 2 weeks. Do you know where you picked it up, not that it matters. It’s interesting that your wife isn’t ‘doctor’ oriented. I wasn’t either until I was diagnosed with cancer so she might consider checkups or ?.as I’ve said , it’s all fine and good till it isn’t.

How do you think you got covid?

Glad you're feeling better Tom, one of my brothers thinks he has Long Covid, even double boosted and vaxed he caught it twice. Both times on a plane. He is being tested and I understand Long Covid stats are through the roof in the US. Not wanting to alarm you. I still haven't got it but I do believe it would kill me with all my health issues.
XO
WWW

The answer to how we picked it up: We don't know. We're both vaxed and boosted; we are among the few who still wear masks indoors (most of the time); we feel like we're more careful than almost everyone else. But still we got it. Fortunately, for both of us, it hasn't been any worse than a medium-to-bad cold. As for long Covid ... oh please, don't even mention it!

I am glad that you are feeling better. My 2 daughters got it, but recovered after a week. So far, David and I have not gotten it.

I am now on Day 22 and I think that day is here for me today. I feel back to normal and I am even able to smell things again today! Yeah!! Going forward I plan to get the flu shot next week and then wait about 6-8 weeks before getting the new booster. Maybe I can get some extra immunity here now from having covid, and getting the next booster a little later will help me later on. I will continue to mask and be careful. My husband and I are fine now, but covid is not something we ever want to get again. (Sometimes I am just amazed that I can go for hours and hours without coughing. It feels so good!-Your day will be here soon)!