We're driving out to Wisconsin to visit my daughter. On the way we stopped in Ann Arbor, home to the University of Michigan.

The university is famous for many things -- well, yes, a 108,000-capacity football stadium, the largest in the U. S. -- but also site of a 1960 speech given by John F. Kennedy proposing the idea for the Peace Corps. Students from Michigan were largely responsible for getting the Peace Corps off the ground.

The highlight of our stay was a walk around the art museum, where several large sculptures are displayed on the grounds. But as we wandered through campus I began to think: Sometimes it's hard to tell the difference between the artworks and the more mundane, functional facilities like benches and lightposts. They all kind of look alike!

So what about you? Can you tell which of the following are photos of art, and which are pictures of the everyday things you might find on any college campus, or any city street? For example, is this a photo of a construction site, or a genuine piece of sculpture? 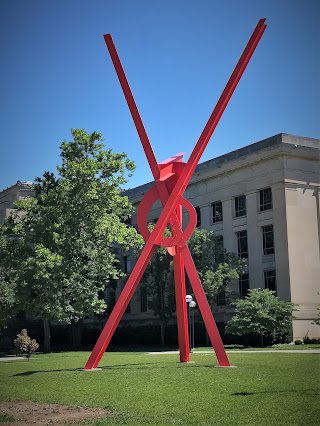 Okay, that's an easy one. It's a sculpture called Orion by Mark di Suvero, named after the famed hunter of Greek mythology. What about this next one. 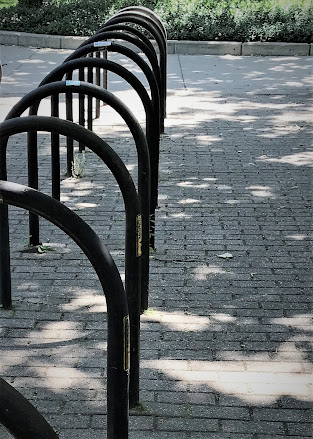 It's not officially art, although it is an artfully arranged line of bicycle racks. How about this one . . . does it say something about the fate of the world? 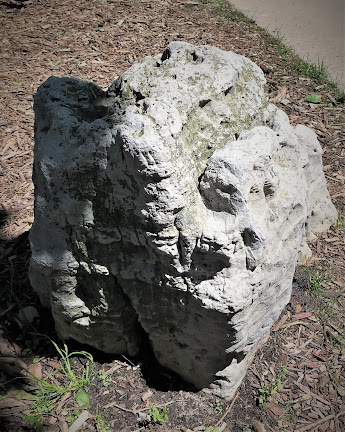 Well, whether it does or doesn't, it's not art. It's just a rock. But the next one must be art, right? 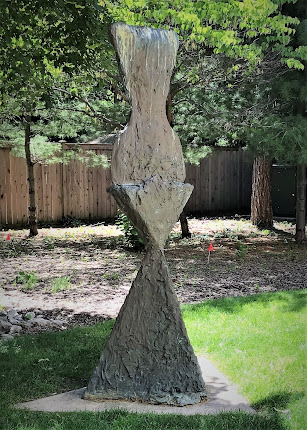 Yes! It's a cast bronze called Ternary Marker, by Beverly Pepper, who honed her vision of shape and form during her years working in a factory. What about this next one -- a sculpture, or just a group of old tree trunks? 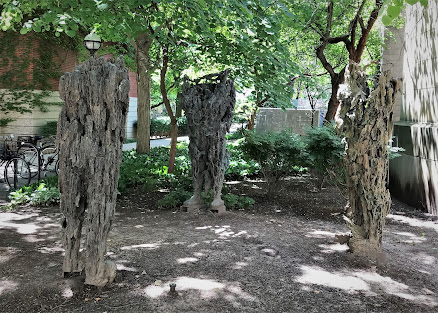 It's another cast bronze called Angry Neptune, by Michele Oka Doner, a group meant to evoke ancient totems engaged in an abstract conversation. But if that's art, what is this? 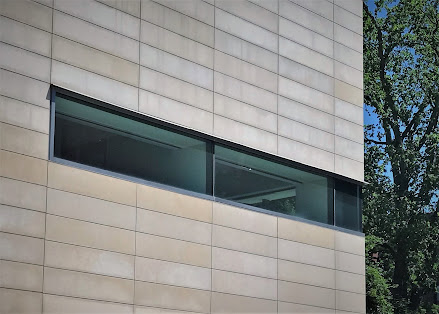 This is art, in a way -- it's architecture. But it's not part of the exhibit, just a close-up of a building on campus. But this next one is obviously art, right, a monumental piece signifying the absurdity of mankind? 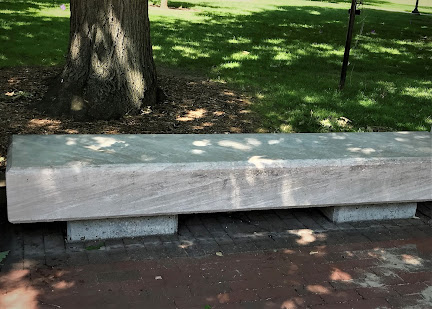 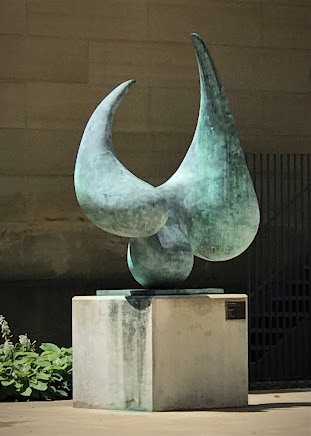 It's called Requiem by Erwin Binder and was commissioned by Bob Hope to recall an eternal flame meant to memorialize fallen heroes. And finally . . . 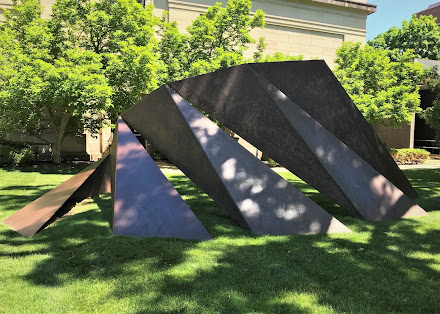 This one is called Daedalus, by Charles Ginnever, inspired by the Greek god who escaped from prison by making wings out of wax. He warned his son Icarus not to fly too close to the sun, but of course he did and so his wings melted and he fell to his death. The sculpture is meant to represent wings in flight. Can you see it?

I don't mean to be disrespectful to art -- it's actually pretty impressive stuff. But hey, what's wrong with having a little fun. You might also check out a previous piece I did called Is This Art? which features some high-minded art, as well as low-minded pipes and poles, from the art museum in Raleigh, North Carolina.

That link doesn't take us to the Raleigh exhibit. Please fix the link. The Michigan sculptures are very beautiful. I like the themes, too. Art appeals to me. So do artists. Gigi hawaii

Wow, you almost got me with Angry Neptune, those petrified tree trunks. Also some clever photos of the ordinary Tom, well art is certainly subjective! I have my limits though, I remember a documentary some years back of the high priced art world in New York City. There was one exhibit of 1000 candy wrappers piled in one corner of a room, selling for tens of thousands of dollars. It was garbage!

I have been to the museum in Raleigh. I enjoy art because it gets me wondering -- mostly about the minds of the artists. In all honesty, the structure most likely to be found in my "collection" would be the rock in the third picture. I really like nature as an artist.

Oh, and for Gigi, you just have to scroll down through the current post after clicking the link and you will find the Raleigh museum.

Thanks, Olga. The Raleigh exhibit is less impressive than the Michigan one. Haha.

I was batting 1000 till that last one. Would have sworn it was a structure destroyed by natural disaster and not art. Oh well.

When you are in Door County don’t forget to have dinner at a “fish boil”, very enjoyable. Found that the most interesting one was at the Old Post Office. And look for the goats on the roof at the Swedish restaurant! A hoot!

Everything should be artful. I like your photos and I always admire photos of the mundane converted to aesthetic delights. Many originating in Europe.
The eye of the beholder etc.
XO
WWW

Gigi -- Sorry about the confusion over the link. I think I fixed it. Hope -- Yes we met up with a friend of a friend who clued us in to Zingerman's. Had a nice outdoor lunch. Jack -- We went to Door Co. last year. This year we're headed to the Driftless area. Wisconsin has a lot of great places!

Tom, what a loaded question! According to google, Art is the expression of human creative skill and imagination. This I can understand. So much of art I love. But there is so much that I really 'don't see'. I guess if it's the expression of creativity.. maybe I can appreciate that (some just doesn't seem very creative). But I will agree that it is definitely subjective - and human creativity and imagination IS something to appreciate.

Driftless area?? Never heard of it. Where is it? Thank you!

Modern or abstract art can be a challenge to understand, but sometimes I can simply appreciate the work, time, and effort involved in its creation. Other times, I get the sneaking suspicion that the artist is having a bit of fun and I'm being had. Who can say? I don't criticize an artist's work, however..whatever they created surely brought them joy.

My wife and I both lived in Wisconsin for many years. We've never heard of a "driftless area." Where are you going, Tom?

I like the Angry Neptune but don't always get modern art. Art either touches you are it does not. I did a graffiti art tour in Los Angeles and it was interesting to learn about what is behind it from actual taggers. Architecture is fascinating as well. I walk around my neighborhood near Pasadena and really get into the Craftsman homes I pass by.

Okay. Found it. Just didn’t know it was called “that”. Now visit Taliesen, Frank Lloyd Wright home and Baraboo, Ringling Brothers home away from home and a wonderful circus town. Especially for grandchildren. Old folks, too

Jack and Dick -- We'll be near Spring Green, WI, on the Wisconsin River, in a hilly area that the glaciers did not reach -- no glacial drift, hence driftless. That's all I know so far, will know more once we've been there. And yes, we're planning to go to the Frank Lloyd Wright home. Cheers!

Those were some "strange" pieces of "art" but I know that some people enjoy that type of art so I'm glad for them. I, on the other hand, happen to like seeing statutes of men on horses. I understand that the memory of their riders make some people unhappy. I see those statutes as art, just as some see these pieces as art. I guess to each his own. I don't want my enjoyment of these statutes to upset anybody so go ahead and take them down but I wish they would be buried together like the Chinese soldiers.

I like Requiem by Erwin Binder and a few others. But being the earth girl that I am, that rock is pretty groovy.

I've seen so many of these modern sculptures but the worst was the one in the Chicago EPA building. It looked like just one huge mountain of trash. I wonder what government hire decided to purchase it, but it was ridiculous. I wonder if it's still there.