"The one absolutely certain way of bringing this nation to ruin, of preventing all possibility of its continuing as a nation at all would be to permit it to become a tangle of squabbling nationalities."
-- Theodore Roosevelt

We've all been around for a while, most of us since the 1950s, some of us from the 1940s. Times have certainly changed, for the country and the world -- and for ourselves as well.

I need to credit Apache Dug for the idea of this post. He recently wrote a post on Bob Newhart and along the way mentioned that he loves the 1970s, or more precisely he said, "for me, the '70s are gold."

Personally, the '70s was not my favorite decade. Okay, there were some great TV shows like All in the Family and Roots . . . and Bob Newhart. But otherwise, honestly, there was also Vietnam, Watergate, gas lines . . . bellbottoms and bad music.

So my question is: If you had to pick a favorite decade in your lifetime, which one would it be?  I  know, I know, we're probably supposed to say our favorite decade is one that's yet to come, the 2020s. But c'mon. For us? Realistically? Besides, the decade hasn't exactly started out so well.

So looking back, we've all seen some good times and bad times. I sometimes think that the best time in my own life was when I was in junior high (now known as middle school ... don't ask me why they changed the name). I remember those days fondly. I had a great group of friends. My family lived in a nice house in a great neighborhood. I even got my first girlfriend. They were innocent times for me, before my brother got sick, before we had to move to a new town where I didn't know anyone, before I felt the slings and arrows of high school.

But my favorite decade, I think, was the 1990s. I was doing well at work, getting promotions and making good money. My wife and I were getting along (we got divorced in the following decade). We had a nice house, and I worked close to home, so I didn't have a long commute and I was able to watch my kids grow up -- I went to a lot of their swim meets, tennis matches, school concerts, class plays. 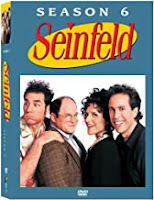 I recently read that the last time the polls showed a majority of Americans thought our country was "headed in the right direction" was in the 1990s -- for several years under President Clinton. Since then the only time a majority thought things were going right was for a brief time under President Bush after 9/11. Ever after, it's all been all downhill.

Back in the 1990s people seemed more civilized, less polarized. They weren't as nasty and hateful. Or so it seems to me anyway. And then there's the capper. The '70s had Newhart, true. But the '90s had Seinfeld. As well as The X-Files, The Simpsons, Twin Peaks, the list goes on. And movies like Fargo, Schindler's List, Saving Private Ryan, Jurassic Park.

I absolutely loved the sixties Tom. The breaking through of the Beatles in Ireland (I dated one of their pals so had a copy of their first hit), loads of stage work for myself, London and the mini, travel around The Continent (Europe to USian ears) a sense of freedom never before experiences by girls.I packed in so much it takes my breath away.

Topping all of that was emigration to Canada and the birth of my daughters.

So yeah the sixties shine. But other decades were really marvellous for me personally too.

Wow, I’m very flattered that my Bob Newhart post inspired this, thanks Tom! This is a good question, and I very much enjoyed what you wrote here because in all honesty, I feel just as you do. I know the ‘70s was a tough decade, but those were my own junior high & high school years. My parents were still here, even 3 of my 4 grandparents--I remember a lot of great movies, TV, music & girlfriends!

But if I wanted to give a more mature response I’d also say the 90’s. The country did seem in a much better place (I wouldn’t want to be married to Bill Clinton, but he WAS a good president); as for myself, after dropping out of college in 1980, went back to school in ‘87, got my degree and an entry level position at a big IT company in 1990. Things just got better & better from there. I think you just inspired a future post on my blog! :^)

I love the tv shows from the seventies, but that was a rough decade for me. I graduated from high school into a recession and was laid off from job after job. We married and bought a tiny house on a FHA loan which immediately required so many repairs we had to take two jobs apiece for the second mortgage. We gave birth to our first child who was shuffled from sitter to sitter, although my husband was home on weekends with her.

My favorite decade is the next one.

My favorite decade - the sixties.
Regarding your last paragraph - Prevention is not only the best cure, but also the best medical insurance. So , keep that in mind,and you won't have to mention Medicare at all.

I'd have to say the early 50's were my best. We lived in tropical Key West, Roy Rogers was king, I had a pony, a steady boyfriend for two years, my family was trouble free and it was my peak period of popularity. I peaked early. "Worry" was not even in my vocabulary. Ahhhh.

Key West .. a pony ... no worries. What's not to like! As for the 60s and The Beatles, I liked them well enough ... maybe I would have liked them even more had I been able to date Pattie Boyd!

Each decade had its ups and downs but my life was very good in the 1990's right into the 2000's. And now I am on the whole content.

Favorite decade? Born in 45 so the 50's were fun and carefree. 60's were high school and college, Elvis (not the Beetles), and marriage - so good there too. But I think the 70's when my kids were babies, married life was just starting out and although we didn't have much money, it was good. Yes, I pick the 70's!

Oh... forgot to mention that I also loved Bob Newhart and Suzanne Pleshette!

Any decade that doesn’t include the past 4 years.

The 1980’s. Traveled, independent, married, both children, great jobs, Reagan years of strong leadership, the Wall came down, It was amazing, personally.

Some decades were better than others. I loved traveling a lot mostly overseas, but don't anymore. I really can't pinpoint any decade in my life that was the best.

For me, the nineties, hands down. I was very active skydiving during the entire decade, was hardly aware of what was happening in the larger world, my son was serving in the Army and still alive, and I loved Star Trek NG! :-)

I have to say the 80s. I had a middle management job I loved and paid me more than my husband who was a teacher. I had my daughter in 1985. We lived in a home we built on 4 1/4 acres of woodland that had 3 walls, mostly glass and a spiral staircase to the 3rd floor. I lived with deer, wild turkeys, chipmunks that my cat played hide and seek with. A beautiful black lab that my husband would throw deflated footballs for after practice. We lived close to the Appalachian Trail and my dog Raven and I spent a lot of time there. My home was clutter free and it felt like nature was always spectacular.

DJan, Wouldn't it be nice, these days, to hardly be aware of what was happening in the larger world?!? And Plynjyn, it sounds idyllic!

"All in the Family." I bought the set, and was very disappointed to discover that I liked the show far better when it originally aired than I now. Back then, I agreed with Michael all the way whereas now I can find neither courage nor intelligence in his outraged moral condemnation of Archie--whose house he ungratefully lives in and whose food he ungratefully eats (Michael isn't a thinker but a parrot). Also, I now find that I positively dislike the ever-whiny Gloria who, if she has a brain in her head, doesn't show it. In fact, the only truly decent regular character in the show is Edith who is constantly flipping from appearing mildly retarded to seeming wise, although Archie is certainly the funniest, and he's even more ethically consistent than Michael.

I have no idea how well "Roots" would hold up after the passage of decades.

I would have added tight perms to the horrors of the '70s, although they might not have come along until the early '80s.

I enjoyed this past decade of being in Hawaii with friends and relatives, but I loved working as a teacher and seeing my children grow in the 80's and 90's.