"I imagine a man must have a good deal of vanity who believes that all the doctrines he holds are true, and all he rejects are false." -- Benjamin Franklin

Is This Really Urban Renewal?

I mentioned that my wife and I took a day trip up to Bethlehem, PA, to catch a sight of the so-called Steel Stacks. So here's what we saw as we turned into the parking lot. 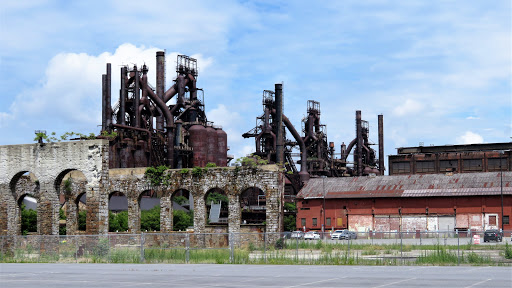 Pretty amazing, huh? We arrived the afternoon that Musikfest was to begin, held annually at the beginning of August. Gates open at 5 p.m., the music starts at 6 p.m. Below is a picture of the main stage, hard up against the Steel Stacks,. Usually Musikfest attracts thousands of young people -- it's located just down the hill from Lehigh University --  but this year crowds are limited, so the main stage is not being used. 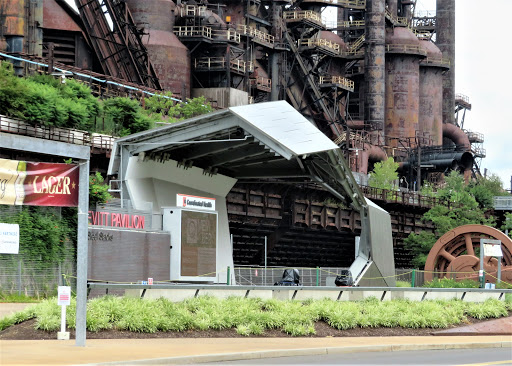 Instead the bands are playing at a secondary stage, across the street in front of the ArtsQuest center. The crowd is limited to 250 people in the main area, and another 250 in this secondary area. Foods tents have been set up in one of the parking lots. Again, only 250 people are allowed into the food area at one time -- all arranged around a one-way pathway. Take-out only. 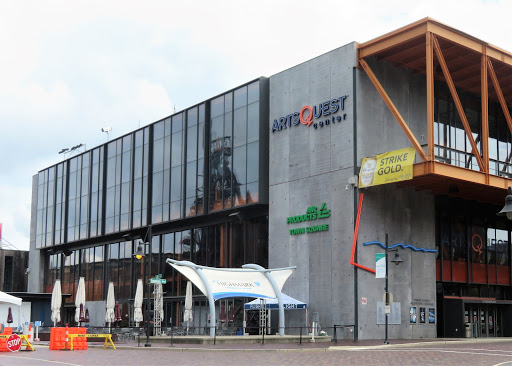 We were not there for the music. We just wanted to see what this was all about. Musikfest is held at the site of the old Bethlehem Steel Company, founded in 1863 to make iron rails for the railroad. The plant was a major manufacturer during both World Wars and went on to produce steel used in modern bridges and skyscrapers. After the plant closed in 1995, it was left to the elements. But in recent years the site has slowly been renovated as an urban chic destination for tourists, music lovers . . . and gamblers. 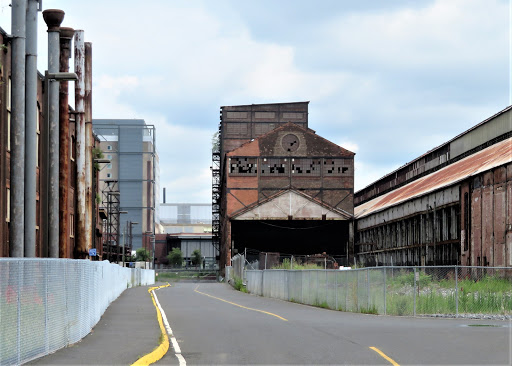 Down the street, behind an abandoned building, we could glimpse Wind Creek casino, which in my mind illustrates the change in our economy from manufacturing (steel making) to services (games of chance). The casino, here since 2009, closed in March and re-opened in June to a Covid-limited audience. We didn't walk all the way to the casino. Instead, we circled back around the other way and found . . . a Roman ruin? 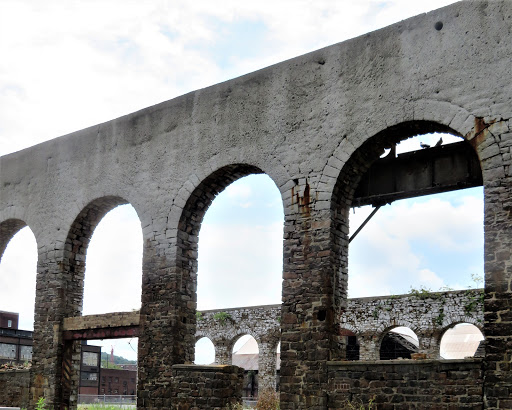 No, just another post-industrial American ruin.. And beyond that, another one . . . 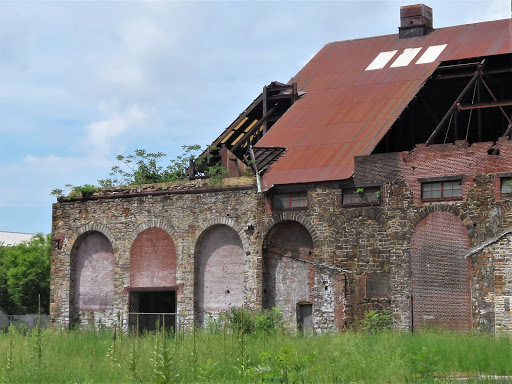 and yet another, whose falling-apart roof lends itself to a more abstract view. 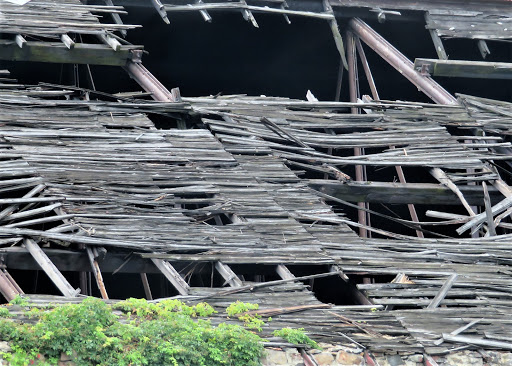 So as you can see, they have a ways to go in the renovations. Still, there are economic green shoots growing out of these old ruins. There's an industrial museum buried among these buildings. A community college has claimed one corner of an old building. Then, of course, there's always tourism, the great American pastime. 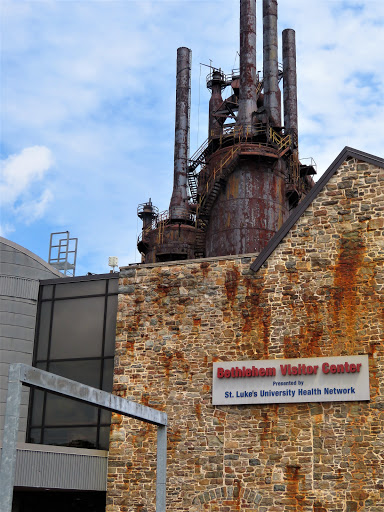 The Visitor Center was closed -- it was opening later in the day for Musikfest -- but we probably wouldn't go in anyway. We don't even use public restrooms these days. So we left for home, wondering all the way: Is the new American economy really better than the old one?
Posted by Tom at 3:09 PM

Wow... I’ve seen plenty of this here in Pittsburgh the last couple years, a former steel mill, Catholic church, school & office building all converted to craft breweries, but the renovations are usually a lot more extensive. Well, it’s sad to see the ruins of another era (a more successful one), but I admire Bethlehem's efforts.

I think it looks rather sad. But your pictures tell a curious story of urban decay. I do use public bathrooms when I can find them, because, well, I don't know what else to do when out. I am pleased to see that many of them are well maintained and sanitized, if I can believe the signs, anyway. :-)

I have mixed feelings about this kind of urban renewal. Schools, museums and music venues are cleaner and perhaps better than smokey old steel plants. On the other hand, sometimes I wonder: Do we actually make anything anymore?

That is really sad to see. A once thriving industry now an eyesore. At least they are trying.
Glad you passed on the Musikfest. I can't see those as good ideas for now. Too soon.

Glad to hear you are getting out and about some. I know it's really necessary for me. But wow! They think it is okay to have a music festival with 250 people? That seems like a lot to me and I wouldn't go anywhere near that type of crowd anytime in the future. So interesting how so many different cities and states are practicing (or not practicing) safety precautions. Another good example of how we really can't turn over our health to anyone else. Stay healthy! ~Kathy

It is sad to see the factories that have gone out of business, even sadder to me for some reason to see the buildings going to ruin. I could do a similar post about old barns around here.

I love to see old buildings like this given a new life. It's heartbreaking that the good jobs the mill provided are gone but I imagine the air and water is cleaner.

Such a shock how we scar the earth. We leave behind rusty bones and pretend it is not there.

Bethlehem Steel was my boss' client in a lawsuit against it during the 1980s. Their steel was used in the Aloha Stadium, but it got so rusty and dangerous that they were sued.

My dad worked at the Bethlehem Steel plant for a few years when he was a young man. One day his pant leg caught fire but it was so hot inside he didn't notice until a coworker started beating on the pants. Looking at these pictures I can imagine those working conditions.

I am always filled with sadness looking at pictures like this. All the sweat and pain and death in making those railroads and war materials. Thousands of workers.

On the other hand I do love the transformations into something more sustainable and earth friendly.

There is nothing but sadness in my heart on seeing this,Tom. Our countries are full of these images of more successful times. These structures lie somewhere between our glorious past and a hopefully more productive future. It's sad to know that many people lost their hopes and dreams here.

Happiness is all i see now, i was herpes sicker for 6 years but i thank God for directing my footsteps to Dr Emu, he gave me instructions and i followed and in 2 weeks i was completely cured using his medicine, I am now Herpes Negative Contact Dr Emu for more information, He also has other cure to other ailment, HIV AIDS, CANCER, DIABETES, HEART DISEASE, HEPATITIS B/C And also restore broken relationships such as Ex HUSBAND, Ex WIFE, BROKEN MARRIAGES, Any kind of Problem in any relationship can be restore back in 24hours, Just Email: emutemple@gmail.com  Whatsapp or call: +2347012841542

I want to thank Dr Emu a very powerful spell caster who help me to bring my husband back to me, few month ago i have a serious problem with my husband, to the extend that he left the house, and he started dating another woman and he stayed with the woman, i tried all i can to bring him back, but all my effort was useless until the day my friend came to my house and i told her every thing that had happened between me and my husband, then she told me of a powerful spell caster who help her when she was in the same problem I then contact Dr Emu and told him every thing and he told me not to worry my self again that my husband will come back to me after he has cast a spell on him, i thought it was a joke, after he had finish casting the spell, he told me that he had just finish casting the spell, to my greatest surprise within 48 hours, my husband really came back begging me to forgive him, if you need his help you can contact him with via email: Emutemple@gmail.com or add him up on his whatsapp +2347012841542 is willing to help any body that need his help.

I am here to give my testimony about Dr Ose  who helped me in my life, i want to inform the public how i was cured from (HERPES SIMPLEX VIRUS) by dr Ose spiritual, i visited different hospital but they gave me list of drugs like Famvir, Zovirax, and Valtrex which is very expensive to treat the symptoms and never cured me. I was browsing through the Internet searching for remedy on HERPES and i saw comment of people talking about how dr Ose spiritual cured them. when i contacted him he gave me hope and send a Herbal medicine to me that i took and it seriously worked for me, my HERPES result came out negative. I am so happy as i am sharing this testimony. My advice to you all who thinks that their is no cure for herpes that is Not true just contact him and get cure from dr Ose spirirtual healing spell cure of all kinds of sickness you may have. penis enlargement
Remember delay in treatment leads to death email him @ {oseremenspelltemple@gmail.com} whatsapp  +234813 648 2342
https://www.facebook.com/Dr-odion-spell-temple-110513923938220/