We drove out  to Central Pennsylvania, about an hour and a half west of us, to celebrate Christmas with B's sister and her family. They live in an old farmhouse that over the years has slowly been surrounded by one housing development after another as various people have sold off their farms (or in one case, a golf course) to real-estate developers. Apparently, housing is a lot more lucrative than farming.

The area is still fairly rural, however, and B's sister lives in a stone house with three-foot-thick walls from the 1700s, with three acres, a huge red barn, and a big front yard and smaller backyard given over to vegetable gardening.

We stayed in the annex, an attached part of the house where her husband's parents lived for over 30 years, until they died. (They chose "shared housing" long before it became popular in current retirement thinking.) The annex has a kitchen and dining area downstairs, and a large bedroom with a half bathroom up the creaky, narrow back stairs. You have to sneak back through a bedroom in the main house into a hallway bath to take a shower.

We visited with members of the family, plus a young man from Tennessee, originally from India, and a young woman working in Los Angeles, originally from Iran. They were friends of B's husband's brother, who's a high-school teacher and somehow makes friends with almost anyone he meets in the hallways -- and often, as in this case, keeps up the friendships long after the kids have graduated. These kids were traveling back to the East Coast for a vacation. They were staying with their friend, the husband's brother, for a few days, then heading for a day in New York City and a day or two in Washington, DC.

Anyway, around sundown I went out back and took a photo looking west. For some reason, it just seemed a brilliant finish to a holiday week, and put a period on the year . . . and a decade as well. 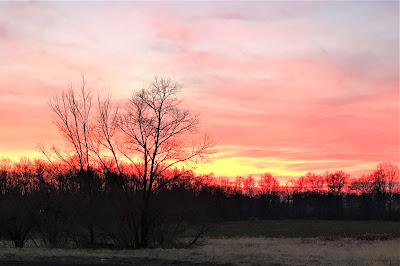 It's hard to believe we're heading into 2020. Each year, each decade, seems to go by faster and faster. Is that the theory of relativity? We have to grab onto them, as best we can, and hold them close.

Yes time does seem to race by at the speed of light!!

Tom, sounds like an interesting place to spend Christmas. We once stayed at an old 300 year old farmhouse in Wales where the walls were that thick and the floors were a bit uneven. Great experience. And yes, 2020 is upon us!

Rian, Ha, ha ... the floors in the Pennsylvania house were uneven too. Part of the charm!

Three foot walls sounds like a dream to heat or cool plus being sturdy in a storm. That sounded like a fun experience and yes time is barreling along. Once over the hill we pick up speed.

Sounds like a fabulous house with friendly people in it. Nice place to be as the year hurtles away. May the new year bring you and all of us some good news.

It's nice to have friends along to share the journey. I love to see all of us here on Tom's blog writing a bit to him. And to each other, fellow travelers on the train of life. :-)

Staying in an old house like that would be a trip. I'm sure it was. It seems like only yesterday we were celebrating New Year 2019. You're so right about the speed.

It sounds like your holidays were just as idyllic as your photo. Best wishes for a wonderful 2020.

Tom, Yes, the years do speed up. The only good thing is its given me more appreciation for each day -- from the lovely, quiet mornings to the evenings cuddling with my terrier, Libby. And all the bustle in between. Love that photo. It encapsulates all that's beautiful about life.

A year ago, I was just leaving CT to move to Florida. I can't believe how much has happened in a year.

This sounds like a lot of fun. That is an amazing blazing sky you captured.

It sounds like you had a wonderful time bringing in 2020. The years and decades are sure moving by pretty fast. Just enjoy every day I like to say. Thanks for sharing. Have a wonderful rest of your day.
Dentist Philadelphia