The Oregon Trail, we learned, was never one single trail leading across the plains and mountains. Instead, it consisted of a network of trails leaving from various places along the Mississippi. The trails then converged on the Platte River near Kearney, NE. Then, after following what became known as the Great Platte River Road for several hundred miles, some emigrants turned southwest to California while others continued northwest to Oregon. Starting in 1847 groups of Mormons also joined the trail, traveling up along the Platte River until they diverged south to Salt Lake.

The earliest pioneers left from Independence, MO, as we did, and followed the Kansas River valley to the Blue River, and then up to the Platte. 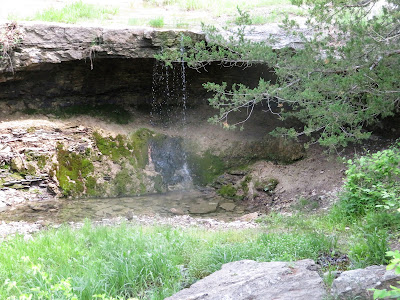 A few days out, the emigrants ran across Alcove Spring, located in northeastern Kansas. We found Alcove Springs the first day, tucked well off the main highway. Today it is still a nice, shady area with water flowing over the rocks -- "as cold and pure as if it had just been melted from ice," according to Edwin Bryant who was there in 1846 with the ill-fated Donner-Reed party. The water was high in the Blue River that year, which delayed their crossing, and was one of the reasons the Donner party fell behind schedule and got caught in the early winter snows of the Sierra Nevada. 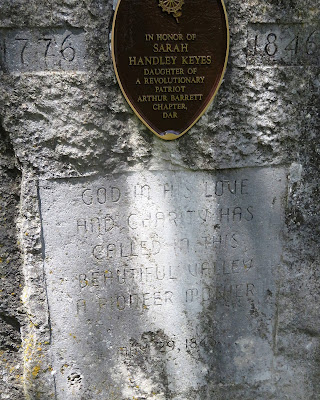 At Alcove Springs there is a monument to Sarah Keyes, a member of the Donner party who expired from tuberculosis here in Kansas, long before the party was stranded in the Sierra Nevada. Originally there were 87 members of the Donner party. Only 48 survived to reach California, many of them that winter of 1847 resorting to cannibalism to avoid starvation. This monument reads: "God in his love and charity, has called in this beautiful valley, a pioneer mother."

But all that was far in the future for the Donner party for, as you can see, when you're in Alcove Springs, you still have a long way to go. 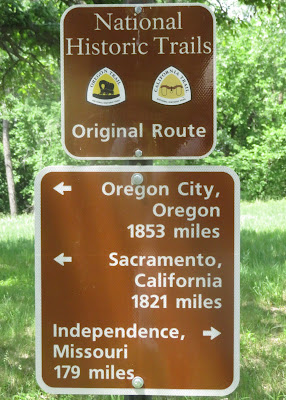 The Pony Express shared the trail with the emigrants for its short-lived life. For all of its lore and legend, the Pony Express ran only 18 months, from April 1860 to October 1861. We saw this statue in Marysville, KS, commemorating those trailblazers who carried messages between the Pacific and Atlantic in a then-record time of ten days. The Pony Express closed down in 1861 after the transcontinental telegraph was completed. 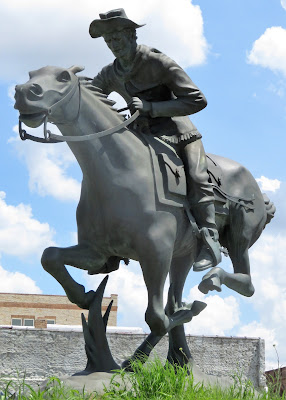 Next stop for us was Rock Creek Crossing, over the border in Nebraska, where we saw true ruts from the Oregon trail. It turns out that the small creeks were sometimes harder for the pioneers to cross than the major rivers, because the banks were too steep for the wagons. The emigrants either had to lower the wagons with ropes, or else cut away the banks to make a more gradual incline. Eventually, enterprising settlers built bridges over the creeks and charged a toll to cross. This bridge is not original, but the trail is -- although it's been worn down considerably more over the years. 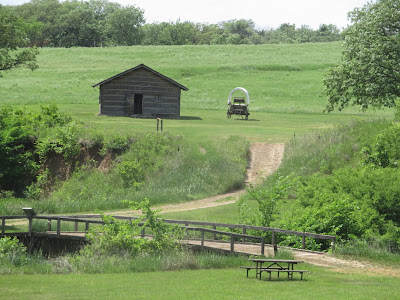 We finally reached the Platte River, a waterway that the emigrants would follow all the way from Fort Kearney to Wyoming. 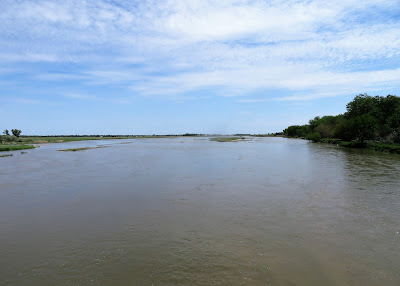 Fort Kearney was built on the Platte in 1848 to serve as a way station for the settlers. The very next year, 1849, more than 4,000 wagons stopped by on their way to find gold in California.

Fort Kearney also later served as a station for the Pony Express, and still later was there to protect workers building the Union Pacific railroad. But after the transcontinental railroad was completed in 1869, the Oregon Trail fell into disuse, and the fort was discontinued as a military outpost in 1871. There are no original buildings left at Fort Kearney, but a stockade and several buildings have been reconstructed. 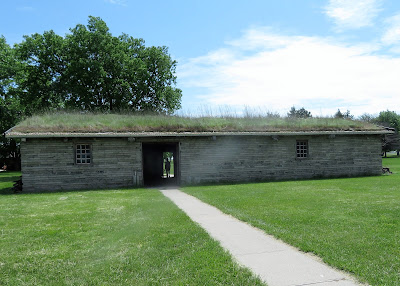 And now we leave Fort Kearney, heading off along the Great Platte River Road toward Wyoming . . . . 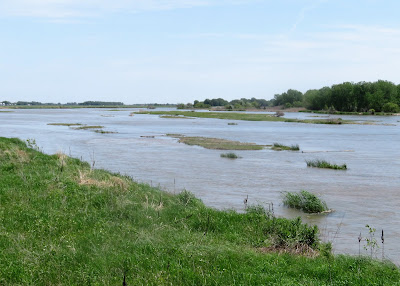 I'm enjoying this series so much. Great travelogue and pictures.

Hi Tom! Interesting travel log. I actually have a number of family members in Nebraska and spent some time there visiting when younger. It should be a beautiful time of year to be going through there and you are sharing some of the histories that I never had a clue about before--ah...the naivete of youth right? I'm enjoying the story AND the photos. Keep it up! ~Kathy

Very interesting stuff and I'm enjoying the photos. I wasn't aware of the problems the small creeks and streams posed, shoulda been they are all over the place here.

This is pretty cool; I get to travel along the route without leaving my armchair. I look forward to the next installment. :-)

What a fun trip this is! Thanks for bringing us along. I have been by some of these places, but they were just in passing as I had business at the other end. Never got to enjoy the trip.

Tom, what a great history lesson! I love history, and thought I knew a fair bit about the settlement of our great continent, but there's always room to learn more, I'm discovering! I certainly didn't know about the brevity of the existence of the Pony Express...so interesting! It stuck as one of the most enduring and romantic pioneer themes.

I'm also enjoying your photos and descriptions in this travelogue. I look forward to reading more!

I really enjoyed this virtual tour and would love to do it in person. Happy travels!

I love your photos and it looks like such an interesting trip. Thanks, for the history lessons too.

I am glad you fixed your identity options. I was unable to comment with just Google Account. Good trip, nice photos.

An excellent, informative and enjoyable post. Great illustrations too. I'll be back

Thank you, Tom - this is a thoughtful and delightful extended story.

Maybe we can do this someday. It is an important and beautiful area. I love that photo with the wagon and barn in the distance.

Boy, that guy who died of TB actually got off pretty good compared to the rest of the people who went with Donner. Of course, some did survive, but, man, one has to wonder how much life is worth if a person had to endure what they did to maintain it.

Of course, I live here in Eugene, Oregon, which was the final destination for many of the Oregon Trail pioneers. One group decided to take a shortcut from eastern Oregon to here only to find that the road over the Cascades that they were told about didn't exist. The party came to be known as the Lost Wagon Train, and while none died (help being sent out), it was close. Once the rescue party arrived, one man wouldn't stop eating pancakes, and it killed him. Another little boy held his pancakes to his chest rather than eating them, and when asked why, he said that he might never see food again, so he wanted to save what food he had.