Who Wants to Be a Millionaire?

I read recently on the Forbes website that 15 percent of Baby Boomers are millionaires. Can that possibly be true?

But then, a million dollars isn't what it used to be. According to a 2016 report from the Federal Reserve, it takes a little more than $10 million to be in the top 1 percent. So $1 million might make you "comfortable" but it doesn't make you "rich."

After all, if you own an average-type house and have been making your mortgage payments for 30 years, you probably now own it outright. And it's likely worth close to half a million right there. Add to that your IRAs, or 401Ks, maybe a second home, a boat, whatever, and, yeah, I guess I can see that 15 percent of us are millionaires.

Plus, if you count the real value most of us have in Social Security and some of us have in pensions (for example, if you have a $20,000 a year pension, at a 4 percent withdrawal rate, that could be considered the equivalent of owning a half-million-dollar asset) then a lot more of us are millionaires . . . at least, of a certain kind. 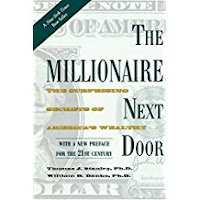 So anyway, despite all the reports of a slow-growth economy, the lack of wage gains, the greed of the 1 percenters, and the woe-is-me articles you see in the media . . . sometimes, we're better off than we think.

With that in mind, I saw this piece from my friend Jeremy Kisner of Surevest Wealth Management in Phoenix, Ariz., who also produces a helpful website focused on "planning great retirements." He refers to a book first published in 1996, but the concepts and principles are no less true today than they were back then. And if you don't think so, I checked: the figures Kisner uses are current numbers.


One piece of advice that has served me well, and I often repeat is: "When what you see and what you hear are in conflict, believe what you see." However, one area where that advice does not hold up is in judging how wealthy people are. We often see people who appear wealthy but are not, and visa versa.

The book that really demonstrated this, with research, statistics and stories, is The Millionaire Next Door by Thomas Stanley and William Danko. The book's major argument is that the vast majority of millionaires do not look or act like we would expect based on popular culture.

Most Americans would define "wealthy" the same way as Webster's dictionary: "People who have an abundance of material possessions." It is hard to believe that most millionaires do not have fancy watches, sports cars or extravagant homes. In a word, they are frugal, living on an average of 7 percent of their net worth. In other words, a household that has a net worth of $1 million, on average only spends $70,000 per year.

Here are some other interesting facts and figures about millionaires:

Many do not drive luxury cars. Ford is the second most popular car behind Mercedes, but ahead of BMW. In addition, cars are typically not the current model year and are rarely leased.

97 percent are homeowners and have on average lived in the same home for over 20 years.

Most millionaires who own their own companies are in dull, low-tech businesses such as construction trades, farming, mobile-home parks, pest control, retail stores. Professionals with advanced degrees, like doctors, dentists, lawyers and accountants, are also well-represented among this group of everyday millionaires.

On average, they save and invest 20 percent of their realized household income.

I find the truth about the "millionaire next door" much more motivating and inspiring than the myth. The myth is that wealthy Americans inherited their money or had a large windfall (e.g. stock options). The fact is America is still the land of opportunity where poor people can -- and do -- go from nothing to significant wealth. Many hard-working Americans create life-changing opportunities for themselves, their children and grandchildren through hard work, and systematic saving and investing. We celebrate it, write movies about it, and our libraries are full of books about it.

So if you are the millionaire next door, I applaud you! And even if you're not, let's be friends.

Well, even with that description of being a millionaire, I don't come anywhere close. And now you'll have me looking at my friends and wondering if any of them are millionaires. Very informative post, Tom. :-)

Money is everything. Remember, you can't take it with you.

I read this book not long after it came out. I was working in estate planning and saw many Mom & Pop company owners, retirees who invested well and others of the "Millionaire Next Door" type. And it is true, they drove the average car, lived in the average house, and spent their money in a conservative manner. I keep trying to teach my children this but they haven't seen the economy rise and bust like I have. Most of these millionaires described above survived the rise and bust of the economy over the years more than others. I'm sure this book is still a "need to read" book.

My aunt my mothers only sister is quite wealthy, she worked like hell for it and invested in real estate in san diego, California..She is 100 and still spry and invested in a living place for wealthy seniors..Everyone said in my family be nice to her and she will give you some money what a bunch of crap..She was generous to me and my hubs, but as for inheritance it is all going to a religion Buddhism she believes in. She used to say to me when I was single to work for my money because if I thought I would marry for money I would work 3 times as hard and never get a dime. She had 2 or 3 ex-husbands and knew what she was talking about..She is something else and always drove a car until it died, she was so frugal I could not almost stand it but she preferred to live that way..You may not take money with you when you pass but it is KING to many while you are above the terrafirma!!!!!!!!!!!!

I really enjoyed The Millionaire Next Door when I read it years ago. It has such great wisdom about living below our means and not buying a bunch of "stuff." You are so right about a million dollars not being what it used to be! Maybe especially here in California, if you own your home (and you count its value in your net worth) being a "millionaire" is not that difficult. I always wondered, though, why people include their home's value in their net worth. It may technically belong there, but it's not like we are going to sell our home, live in a box, and enjoy the proceeds. We have to live somewhere and often (maybe again especially in California) any place we might move to would be expensive too. I know we couldn't afford our home if we had to buy it today!

Thank you for this very informative post, Tom. "Living below our means" makes total sense to me!

This reminds me of a story I heard awhile back in the news. I don't know if it's okay to link the story, but if not, I won't be offended if you delete my comment. I was very impressed with this woman's story when it was in the news.

A great book, for sure. Another one that really made an impression on me is "Your Money or Your Life."

As we jump into our 2002 truck and drive across country in our blue jeans and T shirts, this article fits what I know of most of the Republican :) millionaires we live around. I wonder if the "updated" book would find what we see: shopping for real foods at the farmer's market, taking slow trips to places of beauty, and enjoying our gardens, grands and books.

I'll never be a millionaire but in my line of work knew many. One of the lessons I learned was that there was very little "stuff" in their lives. For instance clothes were treated as an investment, the best purchased, little of it, and repaired when necessary (shoes, briefcases, bags, coats, shirts). This astonished me. They could well afford replacement.

I would be interested in the gender breakdown of millionaires. Couples I understand. Males, yes, but single older women? I'd say very few millionaires.

Wisewoman, interesting question so I did a little research:

A 2009 study in the Harvard Business Review said women controlled 51.3 percent of wealth in America. The American College of Financial Services in Byrn Mawr, Pa., says that 45 percent of American millionaires are women, and estimates that by 2030 through inheritances and spouses, women will control 66 percent of the nation's wealth.

Interesting. I am grateful to have a good pension. I never would have dreamed that I could be somewhat secure in my old age when I was younger, but thank heavens, hard work, getting a good education, and contributing to a pension paid off. I’ll never be a millionaire, but I hope to stay solvent until I’m gone.