Did you play a prank on someone yesterday, or have one pulled on you? This is the best one that ever happened to me, and so while I wrote about it once before, I'll share it again.

Around where I live we start playing golf in the beginning of April. It was opening day of the season a few years ago. My friends and I usually play at one of our local public courses, but this year we wanted to get the season off to an especially good start. We decided to travel up the parkway and play at a really nice links course in the country.

The course is about 40 miles north, or close to an hour's drive. So my friend -- the friend I call Peter -- and I decided to carpool. Now if you knew Peter, you'd know he's a little . . . well, how do I put this? We all love him; he's fun to be around; he's really a great guy who'd do you any favor in a minute. But he's a little quirky, a little unpredictable.

Just one quick story about Peter. A few years ago, when he was getting a divorce, he decided to take a vacation to Australia. He went by himself. He arrived at the airport and picked up his rental car. Did he want the insurance? Usually you answer "no" to that question, because it's expensive and a rental car is often covered by your credit card or regular car policy. But Peter wasn't even thinking about that, and so just signed on the dotted line. 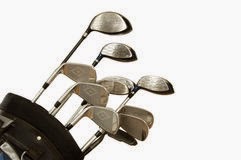 He threw his bag in the trunk, got in the car, and drove off the lot onto the highway. Then he remembered he'd put his hotel information in his bag. In the trunk. So he pulled over onto the shoulder of the road. He got out, leaving the door open, went around to the back of the car and opened the trunk. His head was buried in the trunk when . . . WHACK! A pickup truck clipped his open door. The car door went flying off in an explosion of metal and plastic.

The truck stopped. It was hardly damaged. Peter was fine. But the rental car had a big gaping hole on the driver's side where the door was supposed to be.

Peter stood there for a moment. Then he shrugged. He got back in the car, turned around and went back to the rental car lot -- not 15 minutes after he'd left. He returned the car and explained what happened. They gave him a new car, and he drove off to enjoy his vacation.

This could only happen to Peter. So it shouldn't surprise you to know that I told Peter I'd be happy to be the one to drive to the golf course. We arranged to meet at the mall by the parkway. He'd leave his car there; and I'd drive up to the course.

I pulled into the lot next to Macy's, as we'd agreed. He wasn't there yet. I parked; I looked at my watch; and then I saw Peter drive up. He parked next to me, pulled out his golf bag, and I motioned for him to throw his clubs in my backseat.

He put in clubs in the back then opened the passenger door and got in. "Sorry I'm a little late," he apologized.

"I had to take my medicine this morning."

"Well, have you ever had a colonoscopy?"

"I'm getting my first one tomorrow. So, you know, I had to start the medicine today."

"Yeah, the stuff that's supposed to get you ready for the procedure. It cleans you out. I wasn't allowed to eat breakfast this morning either. I'm really hungry."

"Peter, don't you know, we'll be on the golf course for four hours. It's an hour drive up there. Another hour back home. We'll be gone for six hours."

I was breaking into a cold sweat, imagining Peter exploding all over my car. "It makes you go to the bathroom. That's the whole point."

Then Peter looked at me. A big smile crossed his face. "April Fool!"

This is the best I think I have ever heard! Great story!!

What a great joke! Mother Nature got the best of us yesterday, but only until 11AM at least...

Brilliant I laughed so hard!

Ha! He got you good.

That's one of the best April fool's tricks I've heard for a long time.

What a great story! I don't know Peter, but I like him already! Loved your delivery of the punch line!

Does anyone know why the blog Thrifty at Sixty has been taken down? I love her blog. Tom your blog is awesome too!!

Peter had me going on this one! I believed the story that was told until I got to the end. This was a very good story. HAHAHAHAHA I enjoyed the laugh.

My golfing buddies were prone to pranks also, but they never pulled off one this good.

Man, that made you queasy, didn't it?