"To be happy in this world you have to ignore some things." -- Alan Drew, "Shadow Man"

When I was in high school, back in the 1960s, our teachers would occasionally spring a surprise, unannounced quiz on us, just to see if we were keeping up on our homework and staying on top of the subject matter.

We called these surprise quizzes Japs.

I suppose that would be considered politically incorrect these days. But there was nothing quite like the rumor of an upcoming Jap quiz to recreate terror in the minds of high-school kids something like the horror of the Japanese attack on Pearl Harbor, 75 years ago today.

I don't mean to be politically incorrect -- we all know that the Japanese are our friends now, and they have sometimes bested the Americans in many ways from the economic to the academic. And I certainly don't mean to make light of the horrors of World War II which killed an estimated 60 million people -- more than any other conflict in history -- including some 400,000 Americans and 2.2 million Japanese. 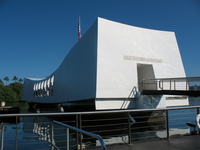 But I don't think people remember World War II quite the way we did in the '60s. Back then the war was much more recent history. We knew fathers and other relatives who'd actually fought in the war, and we were awash in books and movies about the War.

To my kids, the War refers not to World War II, but to the Vietnam War -- the one they constantly heard about from their parents. But Vietnam, as scarring as it was, took much less of a toll compared to World War II. Some 58,000 Americans died in Vietnam, and the total number killed, both North and South, is estimated at "only" about 3 million.

The amazing thing is that it didn't take long for the Japanese and Americans to mend their wounds and develop into international friends. We've now become partners with Vietnam as well.

Today we're embroiled in the Middle East. I wonder if the day will come when Saudi Arabia, Iran, Syria, Israel, and all the others, as well as the United States, will lay down their arms and figure out a way to live peacefully with one another.

I’m 67, so I remember the days when “the war” meant WWII. Yet, because I was so young, the war felt as far away from me in time back then as it does now.

I'm with DJan on hoping that this will (soon) be the case. Thanks for sharing this, Tom.

It's hard to imagine that we will be able to find common ground (or at least agree to live and let live), but I guess most people would have thought that during WWII about us and the Japanese. Let us hope.

That would be wonderful. I wonder if humanity is capable of a prolonged peace.

Japan was our ally during WWI and we have resumed the relationship since the end of WWII. The Japanese military took Japan to was against the US.

It was strange to teach children who knew nothing of Vietnam. Their grandparents were in Vietnam---but it is not really in the history books. Their war was- and still is- in the Gulf. A protracted war- like this one- is so much worse in the long run, because it gets to the point that nobody really cares (especially one that no one has to dodge or protest). How often do you read about the 100 year war between France and Britain?
I would love to see peace on Earth- but I am a pessimist. The imperial "we" have only been in WWI, WWII, Korea, Vietnam and the Gulf. The rest of the world continues to battle (Tibet, Congo, Rwanda, El Salvador, Bosnia, Lebanon, Iran vs Iraq in the 1980's, Chechnya).
As long as one person feels they can get their way with brute strength....
How do we help those in need without being involved seems to be the age old question. Should we anymore?

I don't know. I think that a lot of people will have a lot of growing up to do before we can establish honorable relationships with the Middle East and a few others.

It is a sobering experience to stand on the Arizona Memorial in Pearl Harbor and still see oil slicks leaking up after all these years. Everyone is hushed and respectful. At least for those few moments we understand true sacrifice and a shared history.

Then there's the forgotten war -- actually never officially declared a war but called a police action -- Korea. So many times in war the winning nation absorbs in some fashion the one they've defeated. Can be so much better to see them to becoming peaceful allies. I do vividly recall WWII as was elementary school age then. Having a family member, friend or some known person serve in the military, whatever the war, gives the event more significance to each of us, I think.

So many wasted lives, wasted time, wasted resources. Will humans never learn to get along?

"Will humans never learn to get along?"

I think we'll die before we evolve. At least I'm 67, so maybe it won't get too bad in my corner of the world before I die.

"It was strange to teach children who knew nothing of Vietnam."

How soon we forget, and how condemned we are to failure because of it. I heard about he assassination of the Russian ambassador yesterday, I just thought, two lives lost for nothing.