"You've got to go there to know there." -- Zora Neale Hurston

If Only the Earth Could Retire

As I surveyed the Baby Boomer blogs this week I began to wonder: Would it be possible for the Earth to retire from its job of supporting over 7 billion (and growing at a rate of more than 100,000 individuals every day) dirty, messy, hungry, greedy, self-absorbed, disease-ridden humans?

As a bit of background, blogger Meryl Baer of Six Decades and Counting is taking a trip to San Miguel de Allende, Mexico. The other day, in 90-degree weather (global warming anyone?) she made a trek up to the nearby pyramids, where original inhabitants worshiped the sun, the moon and the planet Venus. She recounts her expedition in Stepping Back in Time Near San Miguel de Allende, and wonders about the venerable king who's buried there and the ancient people who lived in the area before the Spanish arrived to wipe out an entire civilization. 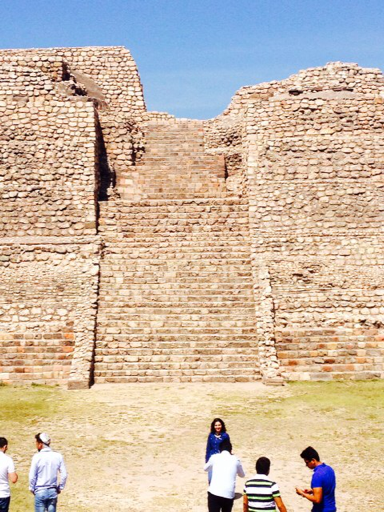 One word of caution though: Don't wander over to her blog if you're afraid of heights!

Meanwhile, Laura Lee in Love Has Created a Space for Us updates us on her effort to get back to nature in Colorado. She and her husband are building a solar-powered home in the foothills of the Spanish Peaks, and she notes, in C. S. Lewis's words, "You are never too old to set another goal or dream a new dream."

On The Survive and Thrive Boomer Guide consumer journalist Rita R. Robison takes a different approach. She recently attended an American Planning Association conference in Seattle and in Startling Ideas to Ponder on Earth Day she reports on the unconventional views of Stewart Brand, conservationist and founder of the Whole Earth Catalogue. In his closing speech, he applauded the migration of people to cities, saying that when people leave natural areas, those areas heal and return to their normal, balanced state. Brand also called for bringing back passenger pigeons and wooly mammoths to help natural areas recover in this new era of climate change.

But maybe Kathy Gottberg of SmartLiving365 has the most practical approach. In Right Sizing -- Choosing Semi-Retirement Instead of Retirement she reflects on a friend of hers who is retiring in a few months. The friend has worked at a challenging job for over 25 years, and is more than ready to move onto something new. But underlying that excitement is a bit of worry about the uncertainty inherent in the future, and that makes Gottberg reflect on how she and her husband are approaching their own future. In their quest to right-size their lives, they have gradually slipped into semi-retirement in a natural and stress-free way. So while so many people ask the all-or-nothing question about retirement, it may turn out that "right sizing" is the best solution of all.

And just maybe that's the way for us to approach Mother Earth as well. Not as an all-or-nothing proposition. Not to herd all people into artificial environments, but to appreciate the natural world, reduce our impact on the globe, and try to relieve some of the stress we put on the environment so we can all live together in a world that's not a hot, steaming garbage pit, but a beautiful garden that offers a place for all of us, and where even wooly mammoths can carve out some space for themselves on this land called Earth.

I have been worrying about the population explosion for decades. If China had not started its one-child policy, they would have added more people than reside in the United States today. I wish there was something we could do about how we are burdening our Mother Earth.

Tom:
Your comment at the end reminds me of a song by Joni Mitchell:
"We've got to get back to the garden..."

Hi Tom! Thanks for linking my post in here about rightsizing AND for recognizing that I believe rightsizing is a powerful way we can all help the planet in our individual lives. Rightsizing of course is that we let go of the idea that bigger is always better and we instead embrace the idea of sufficiency and sustainability in all that we say, do and create. It's not too late! ~Kathy

I'm with DJan. Population growth is the elephant in the (very crowded) room.

I agree that without population reduction or control our race is doomed. The Earth will repair itself when we're gone.

We have an only child, no more for me and my hubs, he was from a huge family, his dad never parented and really his Mom neither his mom lived to nearly 87 and his dad 74 he died because of his drinking and drugging, and smoking, both smoked for over 56 years each, they never had a home and not much food and other necessities they did not care..I lost my Mom early in life, I was never going to live like I had to in God-forsaken Oregon and I made sure to get a college education, married at 26 my hubs nearly 27 and an only child at nearly 30 and my hubs was 30 just a few days before her birth..She is nearly 38 not married and no children, if people could only know what it takes to raise a child from birth thru college maybe they would not have huge huge families..That I said it and many disagree with me but really no one needs 9 kids with no husband and father present and a woman who never liked to cook,clean and all the many things one must do to raise kids!!!!! Why don't people just stop at one child if they have any at all, with all the things that can happen in one's life one child in my opinion is certainly enough when you consider college as an absolute necessity indeed!

I guess in the past people had huge families to help out on farms and businesses but those days are long long gone, if one hasn't at least a BS degree or a technical skill one will suffer so much, most kinds don't think so but when they are out of high school a few years they always tell me they wished they had studied more and got at least an associates degree in something they could actually make a living at..Most people don't realize how expensive college really is and I think a student should work and contribute, not taking out the parents retirement to foot the bill no not indeed!!!!!!!!!! I don't think one has to have children to be a great and helpful person, this earth is fading fast why not be a good steward and preserve what the heck we have~!

I think religion has a lot to do with the laissez faire attitude of most as in God will take care of us all, just pray.

I often feel I'm an alien with my concern about a finite Mother Earth that is bleeding everywhere, she will kick us off like the pestilential problem we are.

I took care of my escape from the busies many years ago, never looked back, live on the ocean, grow and fill my life with peace. And rant off now and again. :)

Humans aren't so bad. Ignorance is the problem. Environmental progress has occurred on many fronts since the first earth day back in the 1970s. Cheer up Tom.

Simplicity is the answer. We need to be content with little. That would solve a lot of issues! :-)

The only way to save this planet is for fewer people to inhabit it.

Unless all those living on it now in the rich nations are willing to share.

Simple living. No MacDonalds. No McMansions. Lots of books, pets, friend, family. Just a nice little world for each might just leave enough for all the others.

In his speech at the planning conference, Steward Brand said since more people are moving to cities, the "population bomb" isn't going to happen. Brand said when women move to cities, they have fewer children. He predicts that the world's population will peak, then decline.

Your last paragraph is excellent, Tom. It is heartening to see so many commenting here on the need for population control. Fewer people draining earth's limited resources would help greatly in providing quality lives for future generations.

I believe that our dear Mother Earth has a finite life span like all living things. I believe that we humans think quite highly of ourselves, thinking that we are the cause and the salvation. Like all dis-ease, we contribute in ways both good and bad but like all dis-ease, some things will happen as they may with or without us.

The metaphor of Mother Earth is tired and cliche. Earth is, was, and always will be just another chunk of rock in the universe. How we utilize the "human defined" resources is relevant only to humans. Hence I see no problem using oil, nuclear power, coal, and anything else to support our undertakings. Maybe a bit fatalistic, but the arrogance of the "Save Mother Earth" movement and banter is amusing at best and causes a tremendous damage to generation of real capital to support the very humanity it purports to champion as enlightened and progressive.