I remember her as an old lady who was always cited in the most respectful terms and regarded as an intellectual par excellence. But of course, she wasn't always an old lady. In fact, she made her mark at a fairly young age.

Who was she? She was born in December 1901, the eldest of five children. Her father served as a professor at the University of Pennsylvania, and her mother was a sociologist who studied Italian immigrants. She was a good student and went to Barnard College in New York, majoring in psychology, and then got her Master's and Ph.D. from Columbia University.

"One of the oldest human needs is having someone to wonder where you are when you don't come home at night."

In 1925, she set out for the South Pacific where she observed and analyzed the local culture, particularly the lives of adolescents. She wanted to figure out if teenage behavior was inherent to itself, or if it was shaped by society. In other words, she was studying whether behavior is shaped more by nature or nurture.

She focused particularly on a group of girls, age 9 to 20, observing the practices of child rearing, education, discipline, gender roles and sexuality. She described a number of specific skills a girl would learn, and then noted that "all of her additional interest is expended on clandestine sexual adventures." She concluded that in this particular society, a reputation for laziness made a girl a poor candidate for marriage, and that a good work ethic was a more highly prized criteria for marriage than virginity.

"I have a respect for manners as such, they are a way of dealing with people you don't agree with or like."

She went on to describe a number of other aspects of the island dynamics. Family relationships were crucial, and friendships were based more on family connections than personal choice. The society frowned on young people showing a lot of pride or individuality, or "presuming above one's age" as they put it; and yet in singing and dancing the normal rules were ignored, as the teens were allowed to let loose and preen and swagger and take the limelight.

"Instead of being presented with stereotypes by age, sex, color, class or religion, children must have the opportunity to learn that within each range some people are loathsome and some are delightful."

She published her findings in a book called Coming of Age in Samoa. Americans were shocked when they read her descriptions of how young girls enjoyed casual sex. The book became a bestseller. But some academics challenged her findings, calling her fieldwork impressionistic and charging that she was gullible in believing what many of the girls told her. Some critics even suggested that she was projecting her own sexual ideas into her analysis. 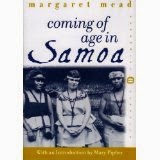 "As long as any adult thinks that he can ... invoke his own youth to understand the youth before him, he is lost."

But the woman, Margaret Mead, went on to become a famous and well-respected anthropologist. And her book, along with her subsequent studies, demonstrated that adolescence is not experienced in the same way in all societies, and it clearly supported the idea that nurture held a more prominent role in determining a person's behavior than nature.

Mead went on to argue that personality characteristics, especially as they differ between men and women, are shaped by cultural conditioning rather than heredity. And she concluded that gender roles differed from one society to another, depending at least as much on culture as biology.

"I believe that the only thing worth doing is to add to the sum of accurate information in the world."

Margaret Mead was named a curator at the American Museum of Natural History, and she taught anthropology at Columbia and Fordham University.  She wrote more than 20 books, and was also a popular speaker, as she helped shape the broadening sexual mores of the 1960s. 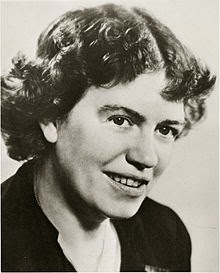 Her own personal life echoed her philosophy. She was married three times, to highly respected academics. She formed a "close personal relationship" with one of her female former instructors, and in her later years she lived with another woman anthropologist in New York City.

Mead herself never identified as a lesbian; but others suggested that -- perhaps consistent with her views on cultural influences -- it was to be expected that an individual's sexual orientation could evolve over a lifetime.

"Always remember that you are unique. Just like everyone else."

Margaret Mead died of pancreatic cancer in 1978, at the age of 77. The following year President Carter posthumously awarded her the Presidential Medal of Freedom. Today, fittingly, several schools are named after her. And the American Museum of Natural History holds an annual Margaret Mead Film Festival, showcasing documentaries and other films that "increase our understanding of the complexity and diversity of the peoples and cultures that populate our planet."

Thanks for another informative post. of course I've heard of Margaret Mead but you've providing a fascinating glimpse into her life and influence.

Some of this I knew as I read her works in college, but most I did not know. Good information.

The book cover showed up in my blog list so I knew right away who this was going to be about. Still, I enjoyed reading the information.37

I knew who it was by the time I got to the second paragraph. What an individual she was, and creative right down to her core! Thank you for reminding me of her. :-)

I met Mead once at an annual meeting of the American Anthropology Association. Small woman with a big staff.

Funny I read a review in the NYTimes just yesterday about work of fiction involving an incident in New Guinea with her first and second husbands.

Her daughter (Bateson) is also a writer, and you will see her doing yoga in the PBS 'special' Yoga for Everyone. Interesting people.

I always admired her, I went to an all girl high school for a few years she was the role model for many of the women and men teachers I thought her fascinating..Many thought her to be a lesbian who cares? it is not important what a persons sex life is if they contribute like she did to anthropology and all the stuff she did in Samoa..I think of her fondly as a role model for women to do what they want to do in any science field or any field of education in an educational environment, poo hah to those that never did get her, I did and many many other young women when I was growing up, I found her studies and the stuff she wrote about absolutely fascinating for a woman in the times she did it..many did nothing..I think you should also showcase Betty Friedan and her many accomplishments..ciao happy holidays!!!!!!!!!!!!!!!!!!

I thought this one might be too hard; turns out it was too easy! Shows what I know. However, for once I was ahead of the game. Check our my Remember Her? of Feb. 2, 2014 for the Betty Friedan post.

It was an easy one for me, but I'm not sure why. Mead's major achievements were known to me, but I was unaware of the details of her life and professional career. Thanks for an interesting read.

Very professional and gentle. The staff is very accommodating and the office is very stunning and clean .
Best Root Canal Treatment In Chennai