Reading newspaper articles or watching TV news -- especially TV opinion shows on MSNBC or FOX, or listening to talk radio -- you can sometimes fry your brain trying to follow the twisted logic. The co-called "professional partisans" are experts at breaking the rules of logic in order to make their point of view seem more believable.

I guess we know when one side calls the other a bunch of Dumbocrats; or the other refers to the crazy right-wing nutjobs, that they are breaking Rule # 1 on The List of 10 Commandments of Logic.

What about when a commentator says that unions are the reason manufacturing jobs have left the United States? Or that people crossing the border from Mexico are invading our country? Or that people on food stamps are working the system instead of working a job? Or if we raise the minimum wage, it will kill small business?

How about when a pundit posits that regular people have no influence on the government these days because the greedy 1 percenters have bought and paid for the U.S. Congress? Or if people have qualms about abortion they are part of the War on Women? Or, if only we paid teachers more money that would solve our education problems?

I'm sure you've seen and heard plenty of examples of how pundits torture logic in order to try to bolster their opinions -- and how sometimes they take such big leaps of faith that they actually weaken their position rather than strengthen it. Anyway, I saw this guide shared on facebook by a friend of mine. So next time you're listening to a talking head pontificate about some issue, you can see for yourself if he or she is speaking logically, or just spouting off, playing havoc with the rules of logic. 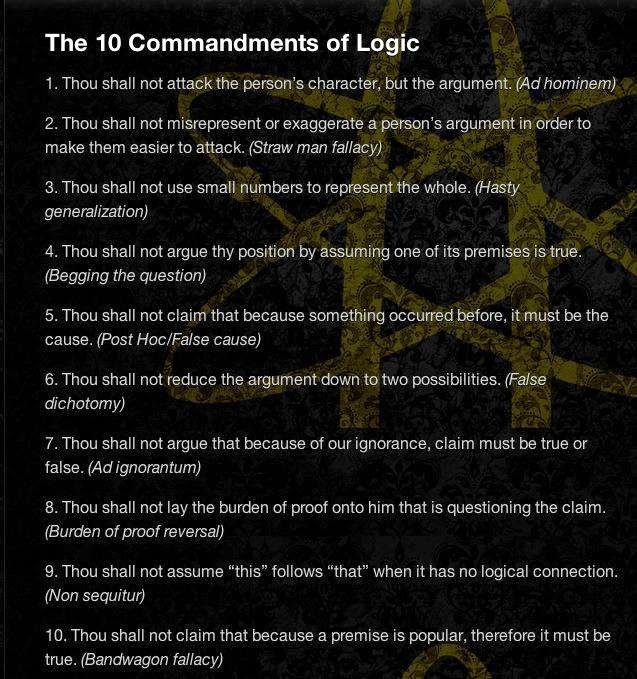 Yup, a lot of people believe in fairy tales, too. Love the list. So apt these days.

If people don't watch Foxnews and the mainstream news doesn't report what Foxnews does, how will people keep informed?

What do you know about Benghazi? Fast n' Furious gunrunning? Bergdahl? Gitmo? The IRS scandal?

Perhaps one shouldn't presume... Perhaps we shouldn't limit ourselves...

Not saying Foxnews is superior, just saying that we can too easily limit our knowledge of events by limiting our sources.

Fox News is more slanted than MSNBC and CNN is more hyped than the other networks. Personally I find Public Television just right followed by the BBC!

I miss the days when news anchors could be trusted to just give us facts instead of hitting us over the head with their ideologies.

I have had three conversations with a family member recently. He comes to the discussion with his opinion already formed. After he tells me, at length, what it is, I tell him my opinion. The final shot is his - opinion unchanged.

I told him, finally, that I'm not going to have further conversations on news topics with him. He seemed fine with that. After all, he knows the media know best.

If you don't switch around the dial and try different channels, including Fox, you will become one of those souls with an closed mind. I watched MSNBC for years. Then one night when Keith Olbrrman said Bill O'Reilly was the worst person in the world...for the thousandth time we switched to Fox and O'Reilly one night (same time slot as Chris Mathews). Personally, I don't think O'Reilly is the wrist person in the world, although compared to Rachel Maddows, he may be the most boring.

To Stephen. Oh they were so unbiased in the past...remember Vietnam? Cronkite reporting the news every night about how we were winning the war, or Dan Rather trying to dorm up a false story on George Bush.

Also PBS is not without bias. Have you noticed one of the Koch brothers antes up $$ for NOVA?

Thought I'd add a question:

Commentary shows will always have bias while hard news shows should not.

the bias in hard news shows is sometimes difficult to discern. Placement, time spent on, and emphasis on certain news items are the only ways to see it and those insert the viewer's bias into the mix.

Billo and Rachel are entertainers, just like Tina Fey. Many people believed the things Fey said had actually been uttered by Sarah Palin. SP was not the best choice for John McCain, but the treatment she and her family received were shameful. The worst was the critical comments about her youngest child.

I say there's a difference between news, political commentary, and entertainment, even though there's obviously some overlap. But at least theoretically there shouldn't be any room for bias in the news -- they're just reporting the facts -- except as you say, Douglas, in selection and prominence. But the news outlets by and large report on the same stories, those that are immediate, that involve celebrities, or touch on some hot topic. You know, if it bleeds it leads. That's where most of the bias is in so-called hard news.

Political commentary is really what I was talking about in this post -- where people interpret events and what they mean. And that's where I think holding people to a logical argument makes sense. Make the point; but make it honestly. Too many commentators these days just call their opponents names; or make false assumptions that they know their audience will agree with; or set up straw men as easy targets to discredit.

As for entertainment ... well, that's another subject.

Tom, in the better newspapers of yore, great efforts were made to maintain clear distinctions between hard news, editorial opinions, and commentary by columnists. My local newspaper still does that, but its circulation is dropping and its end is near.

Television has never been good at separating news from opinion, or presenting news stories in any depth, and probably never will be. The medium basically is good for providing entertainment.

With print media dying rapidly and many polls showing most Americans get their news from TV, chances are slim we are going to have an enlightened public in the U.S. any time soon.