I've spent a little more than two weeks in the Sunshine state. I'm on vacation so I haven't done much besides go to the beach and play golf, including a round with Douglas of Boomer Musings and two of his friends who were kind enough to let me join their foursome. I also visited with friends and relatives, and dined in restaurants with fishnets hanging from the ceiling.

I won't bore you with the details, just leave you with a few impressions. (I had plenty of time to organize my photos yesterday since the New England/Denver game was too one-sided to hold my interest.) Anyway, one salient impression you get is that a lot of tourists visit Florida (over 87 million in 2011, the most of any state according to the Florida tourist board). And that brings in a lot of traffic. Get a load of this intersection on Route 41 south of Ft. Myers. Count 'em -- 18 traffic lights! 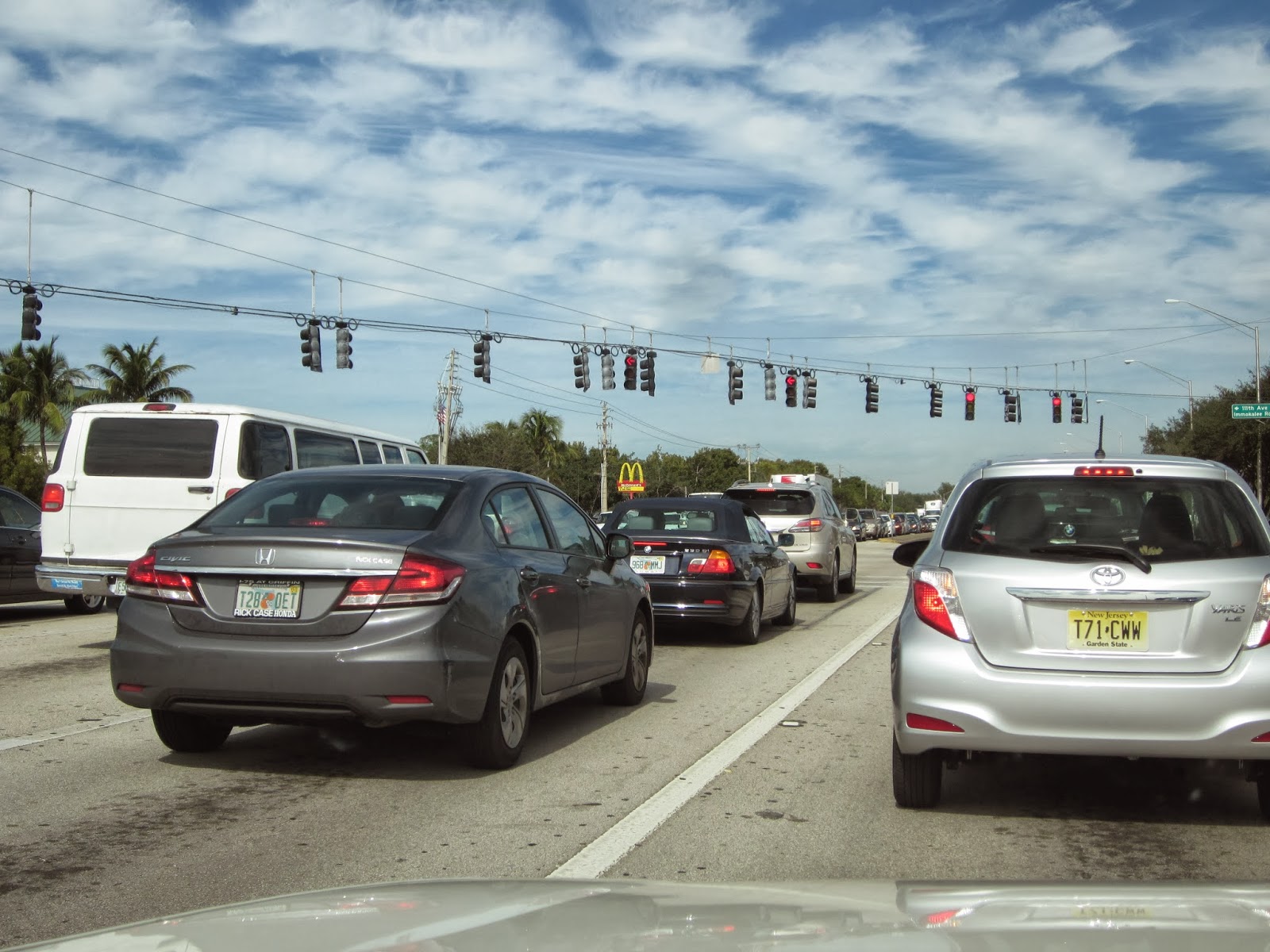 And another thing -- I haven't seen so many American cars in a long time. I guess it makes sense, since a lot of visitors on the West coast of Florida hail from Michigan, Illinois, Indiana, and other Midwestern states. I didn't see anyone from California, Oregon or Washington. But I saw some from Utah, North Dakota and New Mexico. 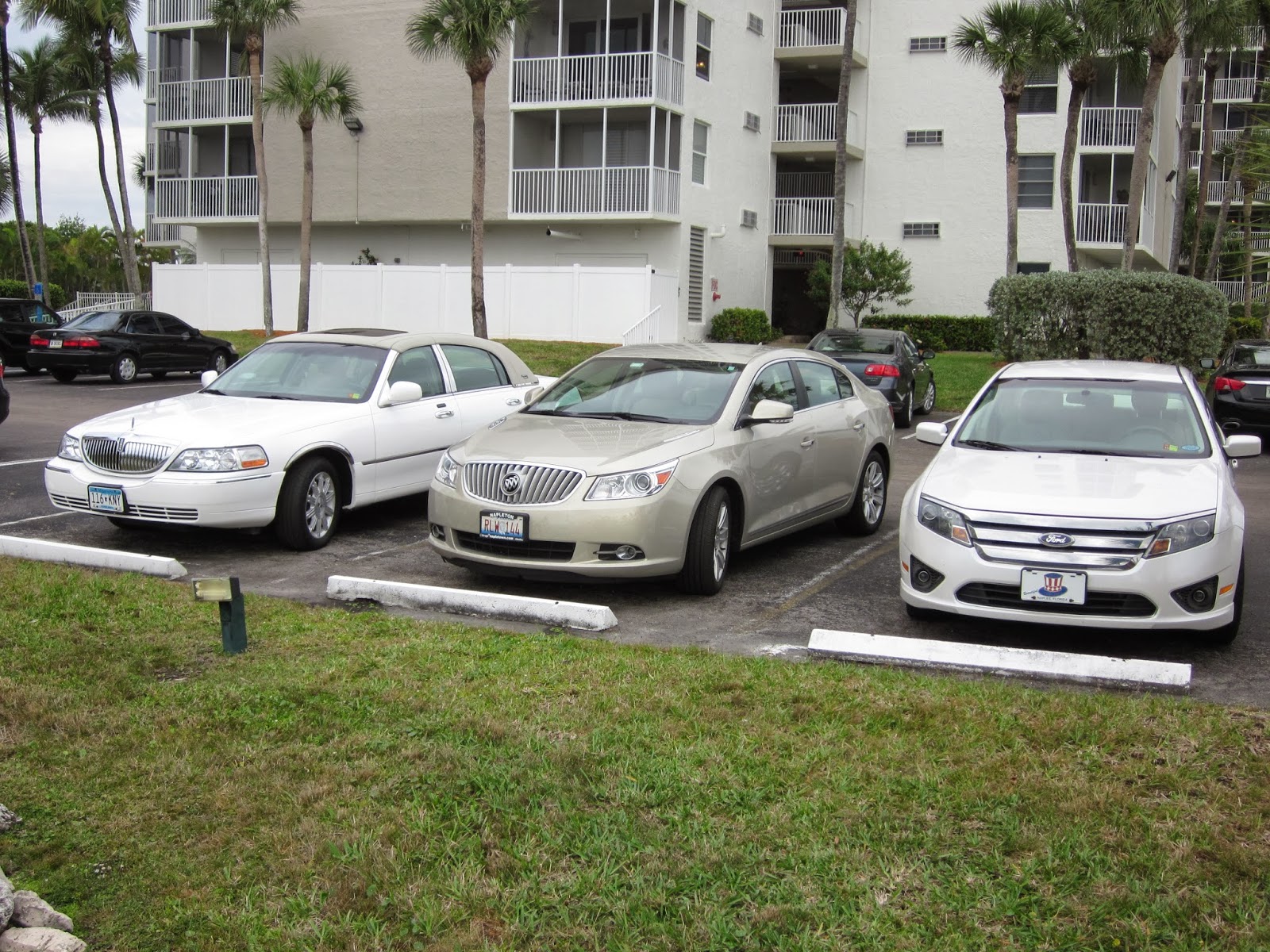 But as we all know, Florida goes from the Atlantic ocean (where it was too cold for anyone to sit on the beach) . . . 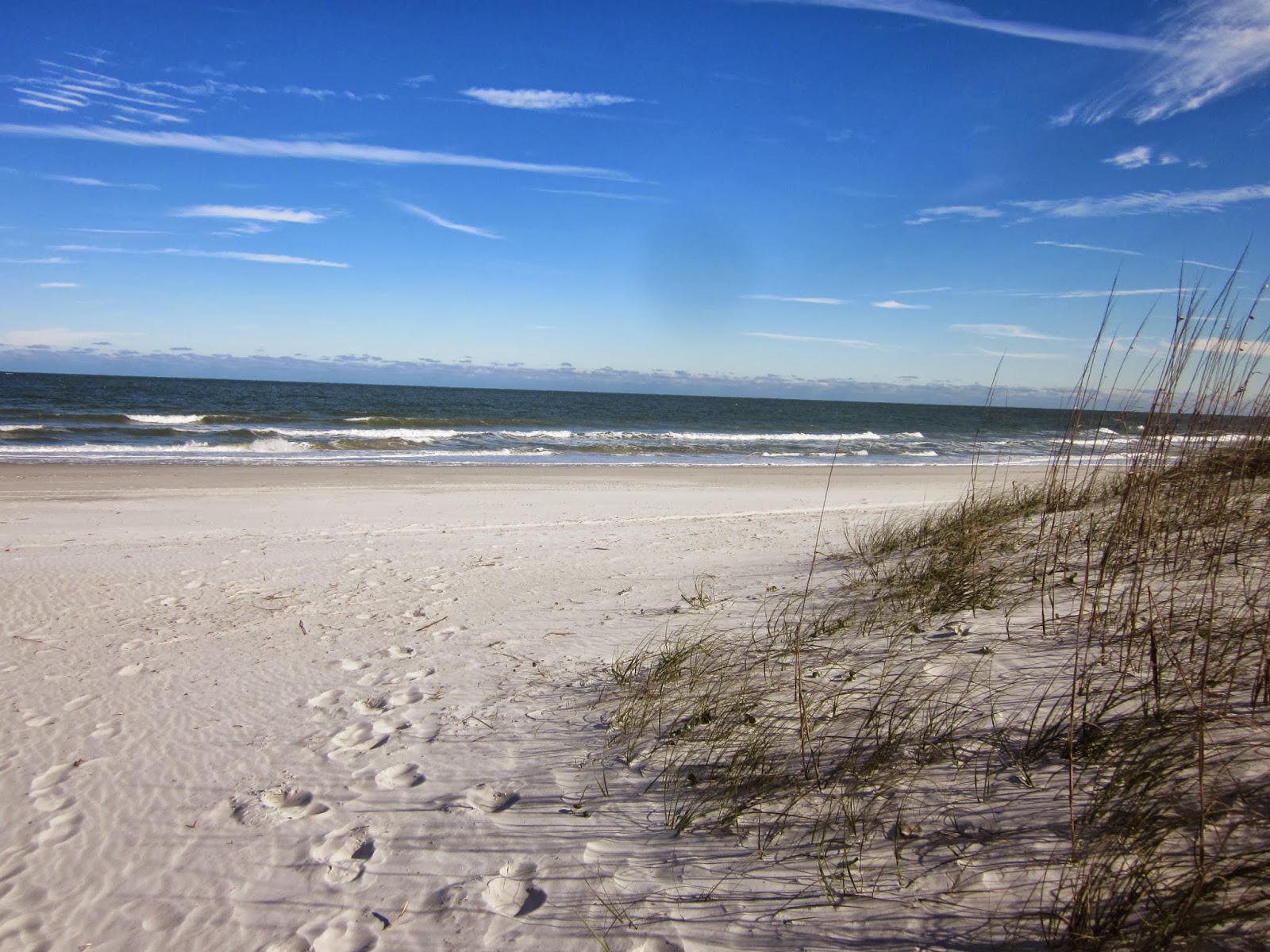 around along the Gulf of Mexico, for a total coastline of some 1,800 miles. 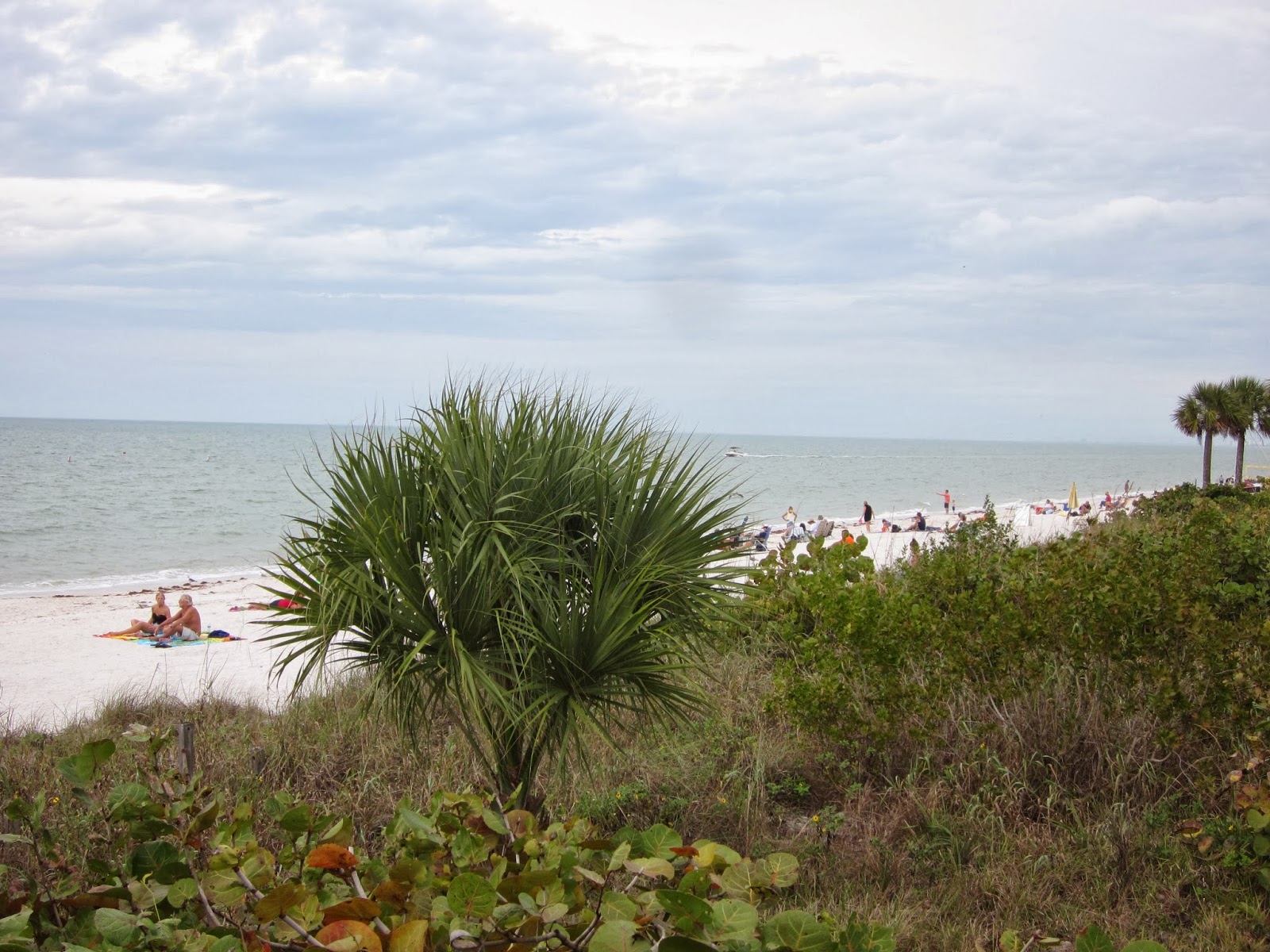 And there's plenty in between. I spent some time in Orlando and went to Disney's Celebration . . . 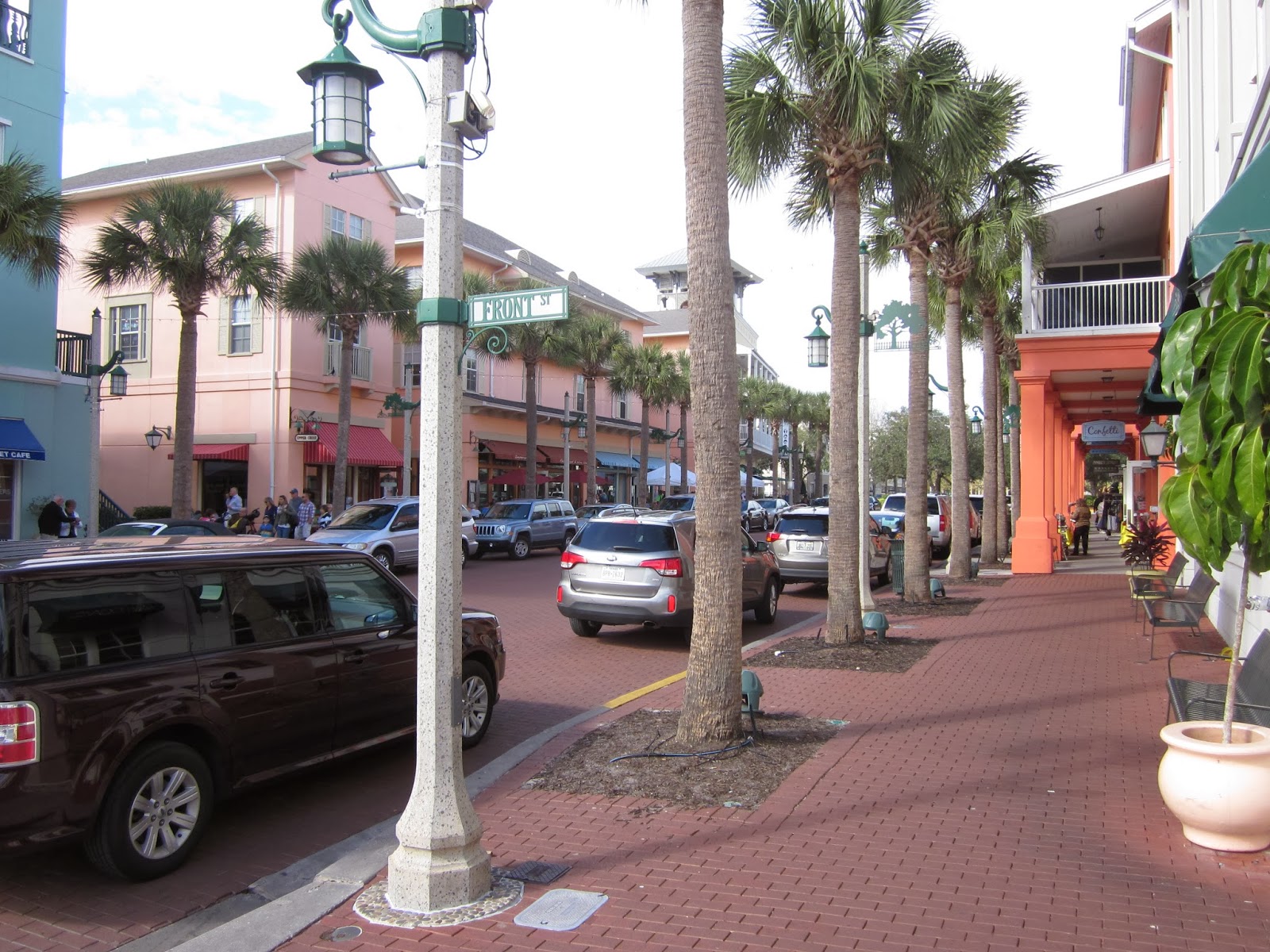 where they were filming a promotional video. 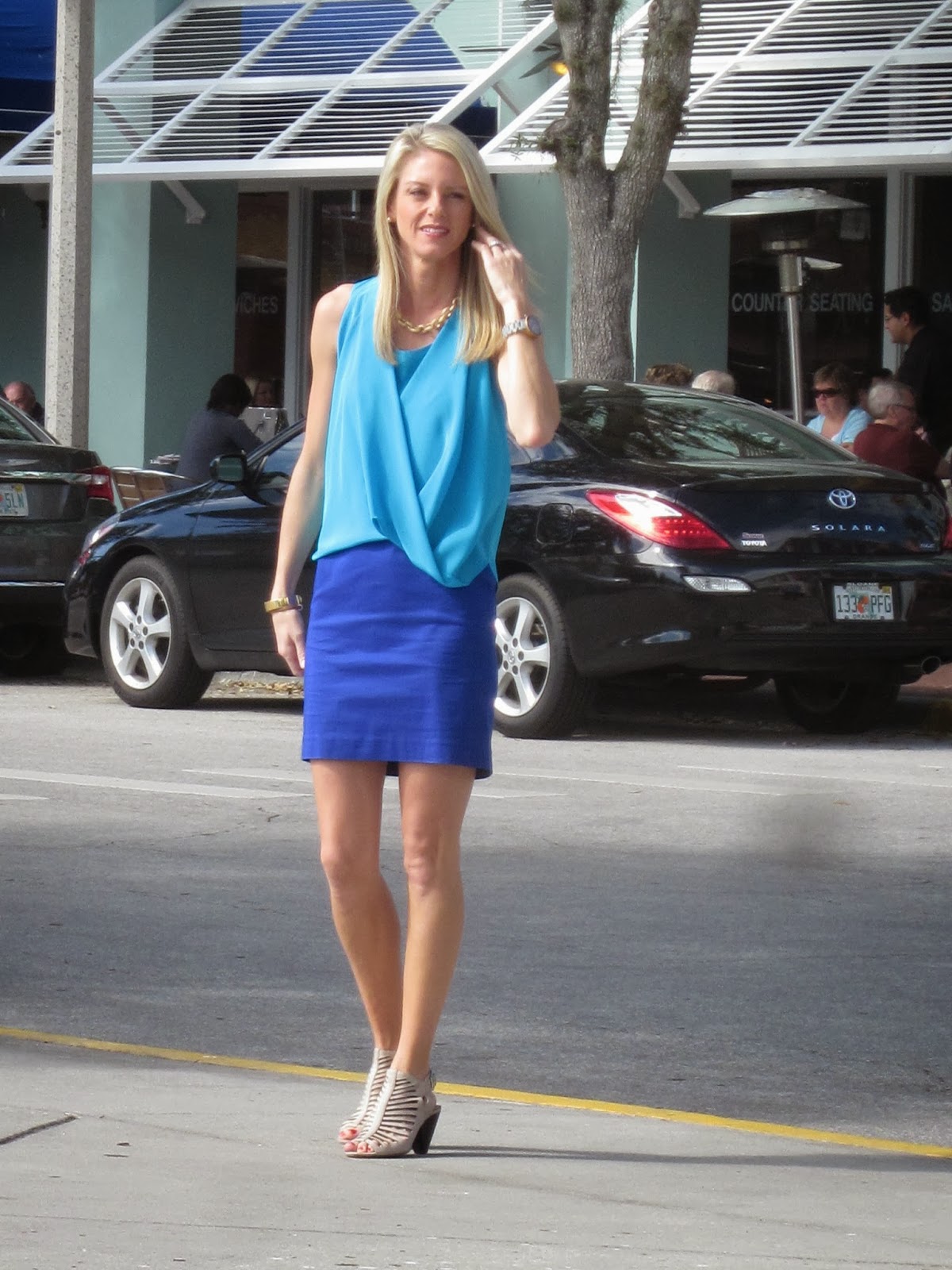 They had a farmer's market there. 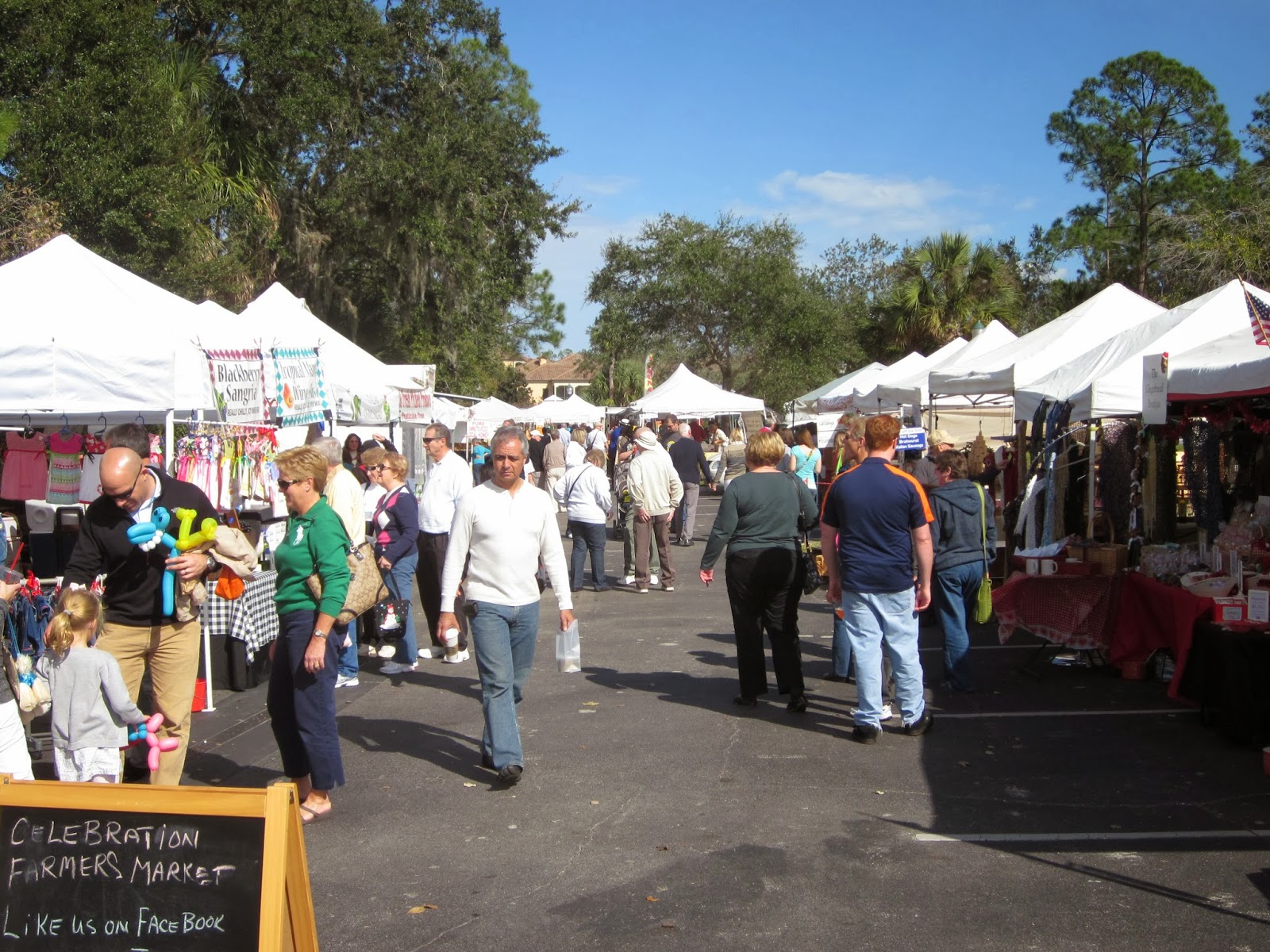 And they were filming a promotional video. 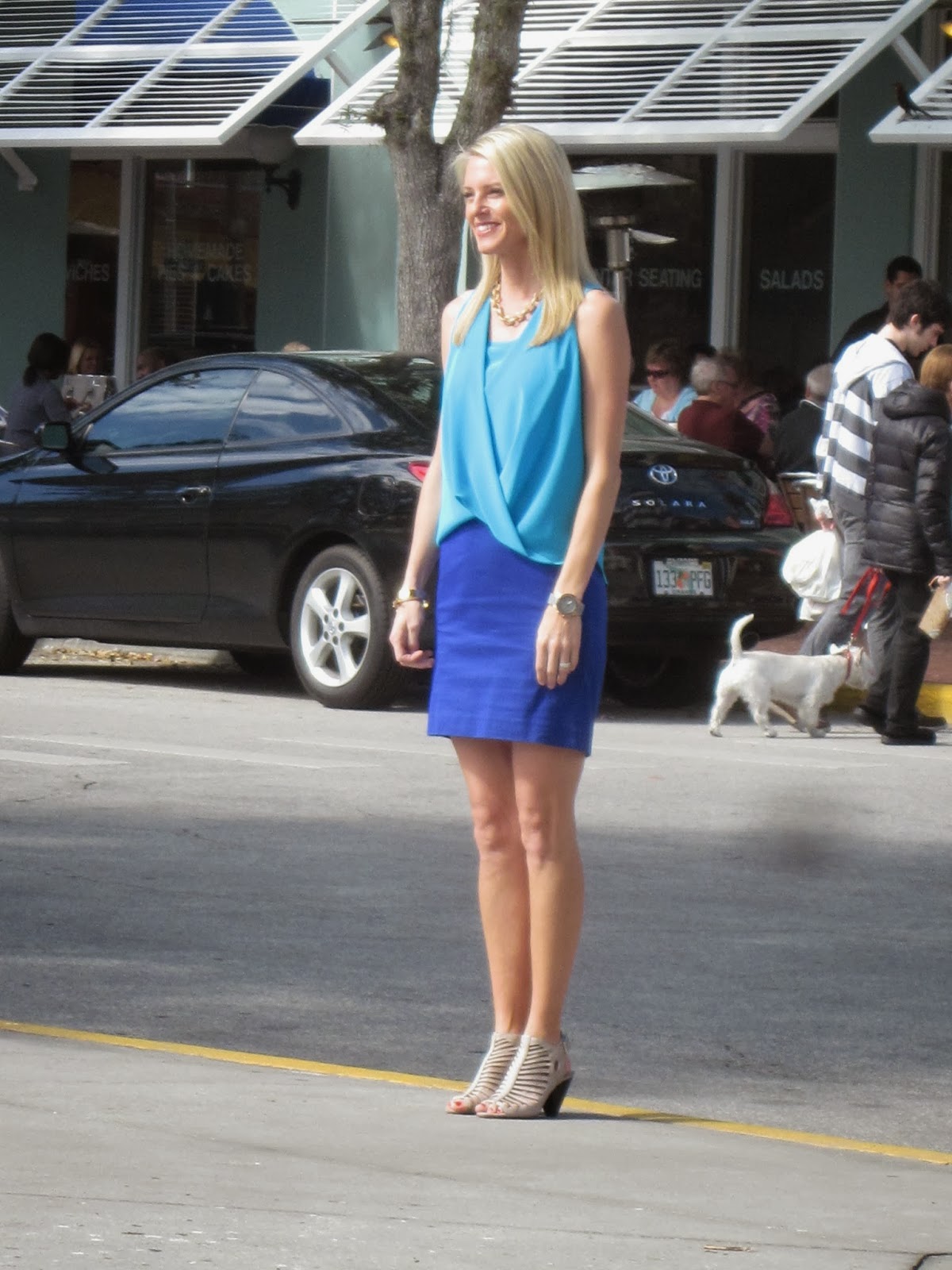 So as you probably know there are plenty of golf courses in Florida (some 1,250 at last count). 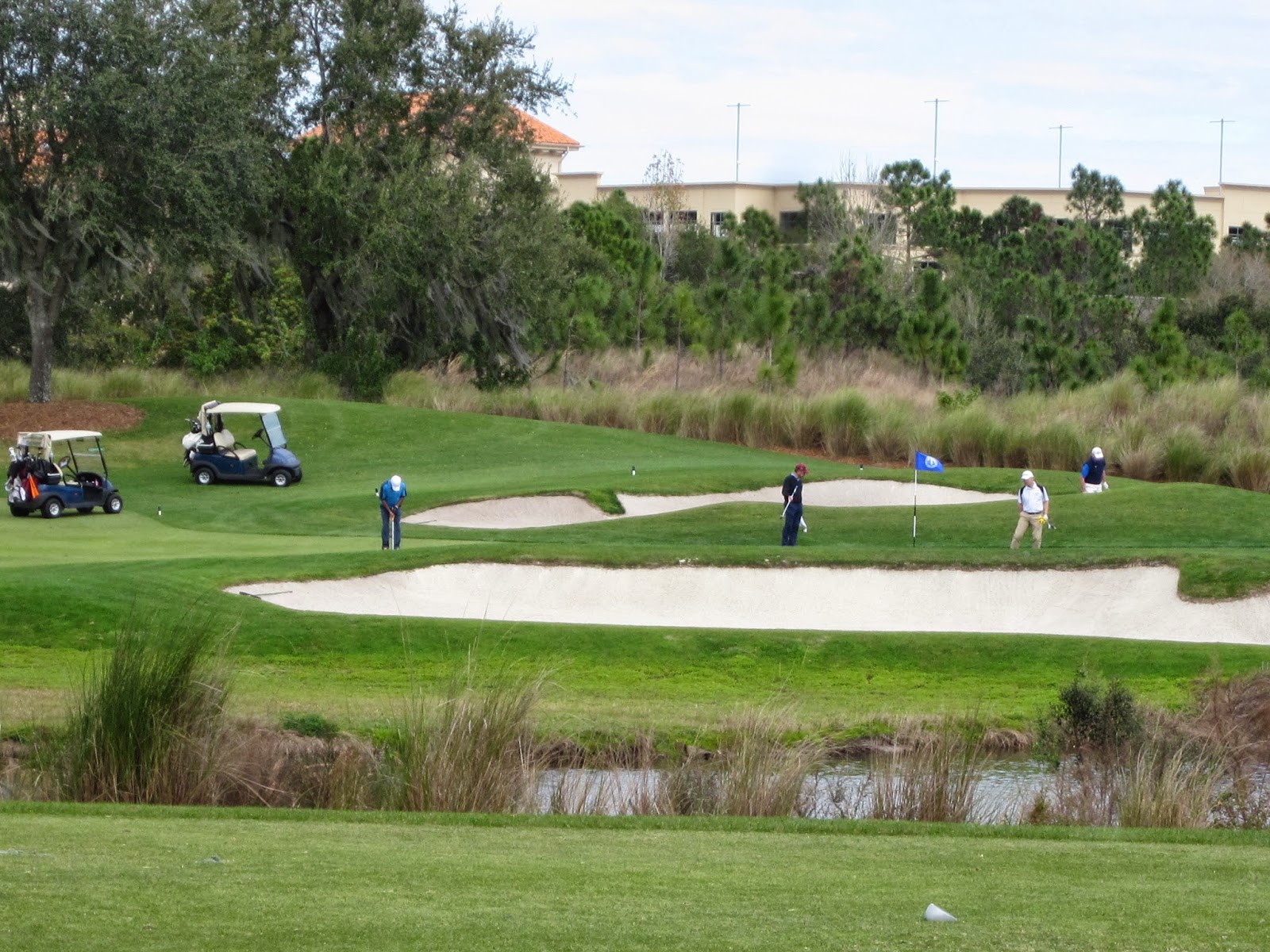 And boating is another favorite activity. 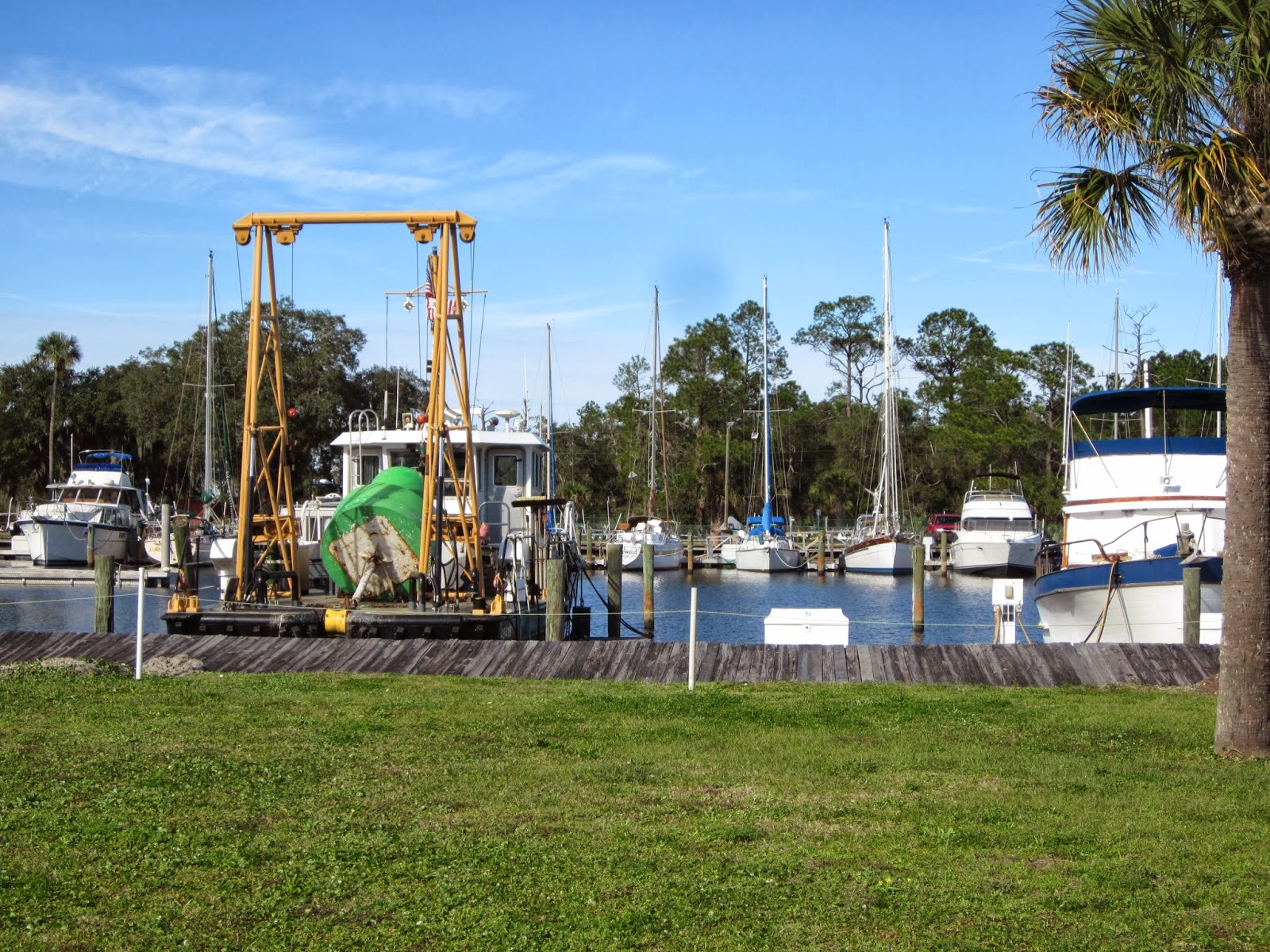 There's also the "real" Florida where they have horses . . . 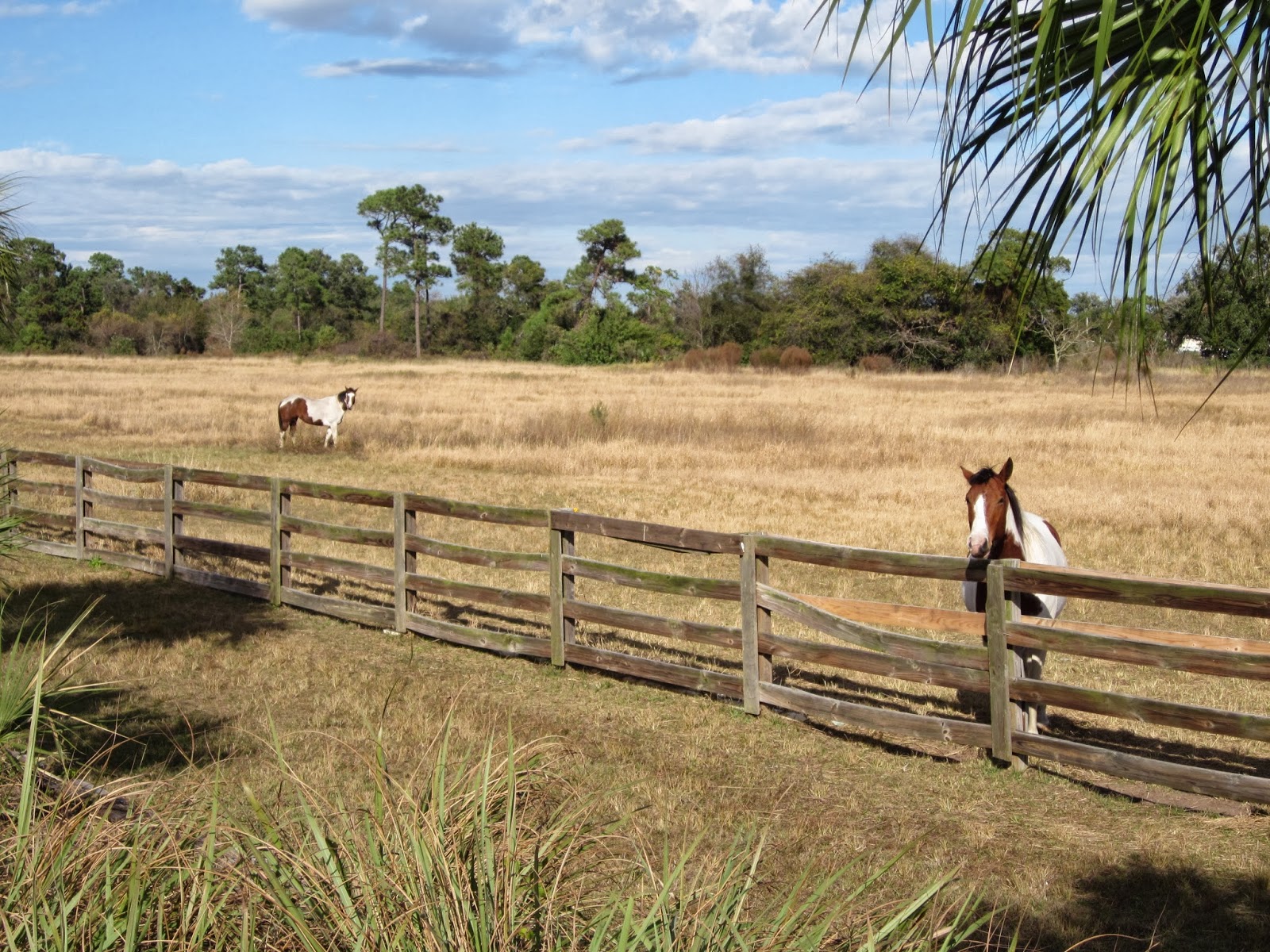 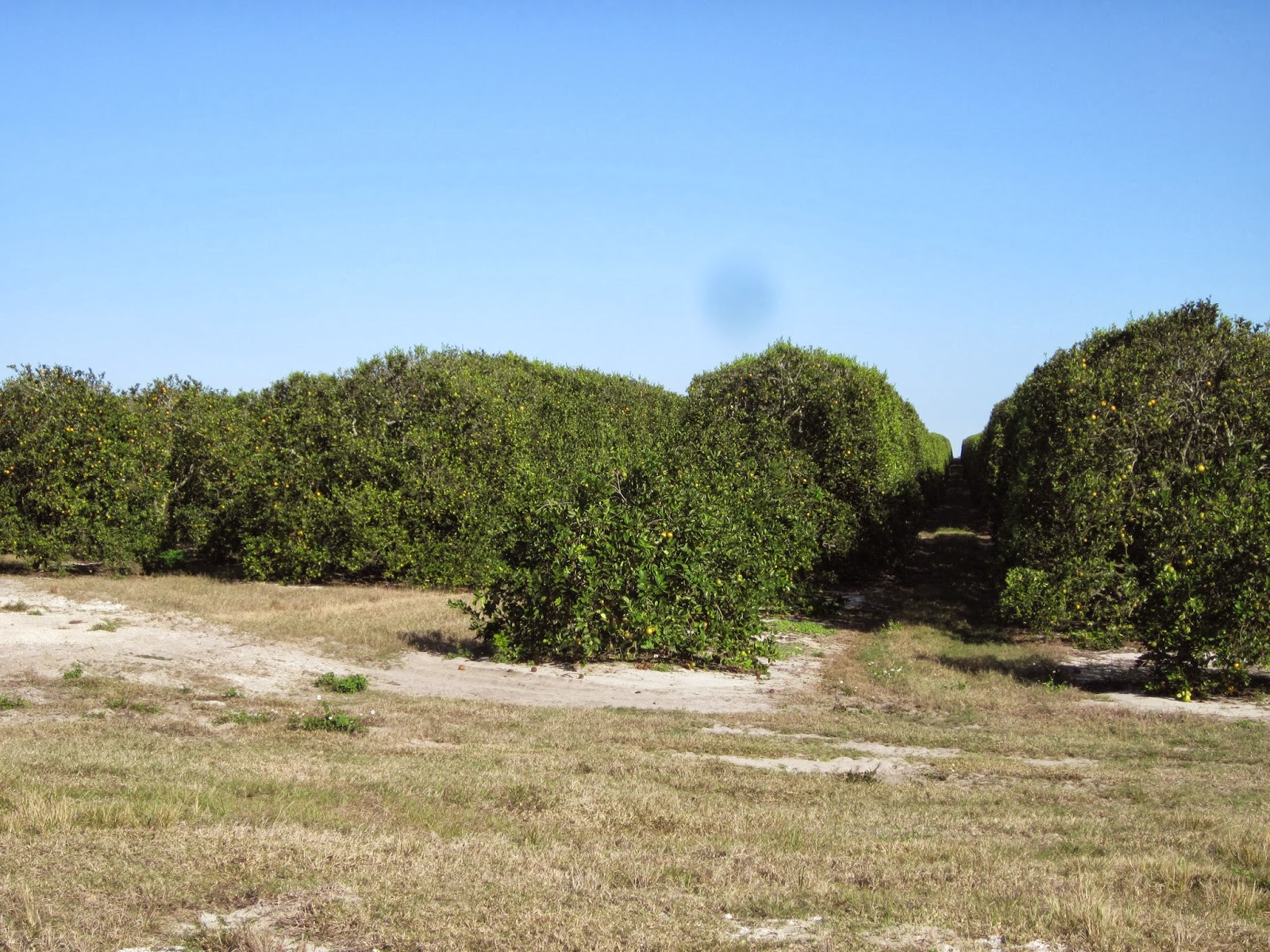 Oh, did I tell you about the promotional video they were filming? 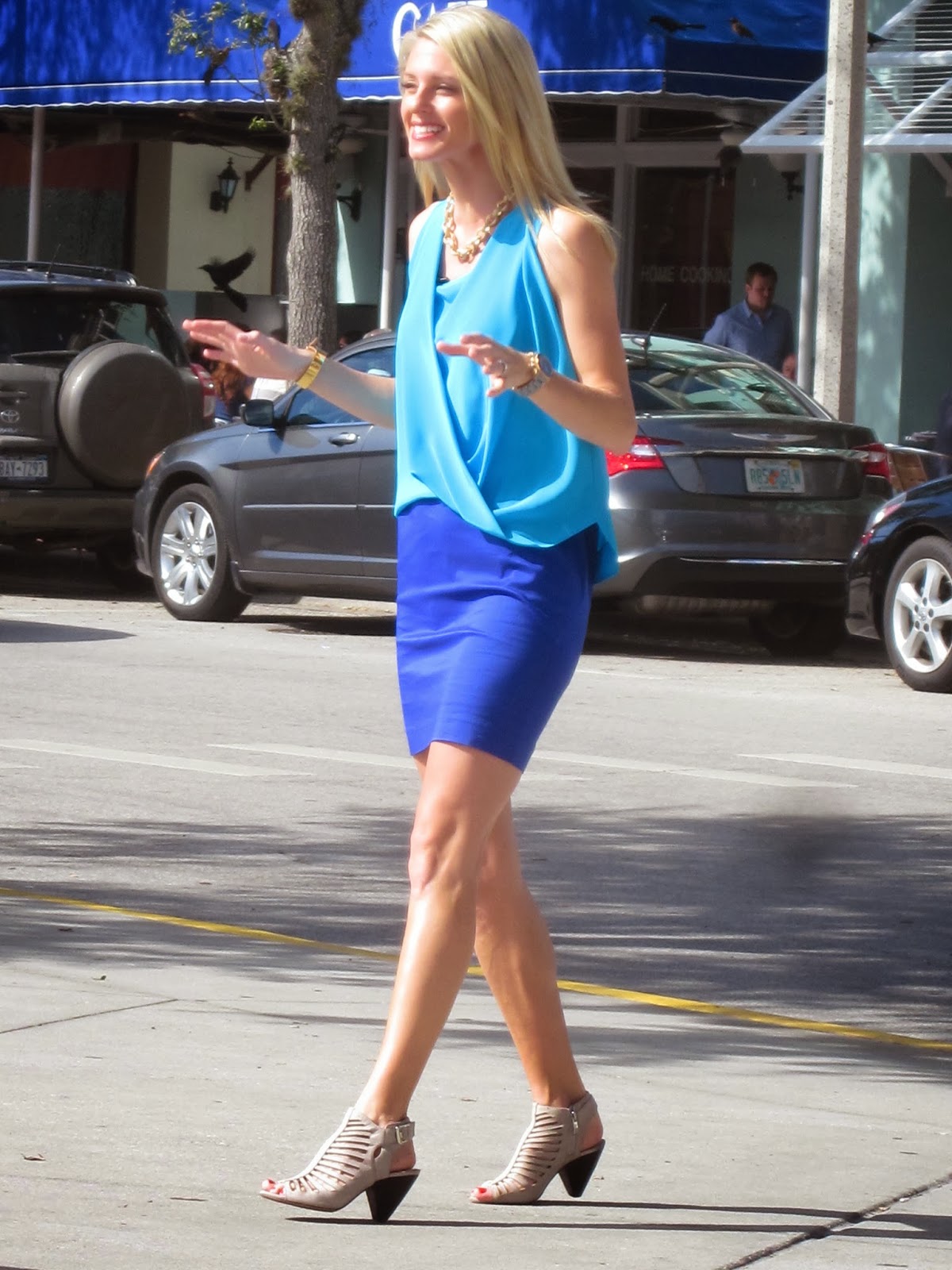 My family moved to the Miami area in 1958 when everyone spoke English there. They stayed there until death. I went away to boarding school in 1963 and didn't return to live until after college. After 4 years there I moved away in 1977 for good, and only returned to visit family.

For me the climate is too warm and humid, the traffic too dense, and the bugs too large and numerous.

I did transfer planes twice last week in Miami, but fortunately never needed to leave the airport.

As you can imagine, it's highly unlikely that my final retirement location will be in Florida.

I have visited Orlando and Miami and enjoyed the Everglades. Interesting place.

I am guessing (way out on a limb here) that you were taken with the promo filming. You dirty old men are all the same! Of course here in Venice, one might get the impression that there is not a single person under the age of 65 living in the state so I can't imagine what exactly was intended to be the promotion there.

I was moved to Florida when I was 9 1/2, to Dade County... and over the years came back again and again. In spite of the humidity, in spite of the bugs, in spite of the truly oppressive heat of summer. It is, as they say, HOME. If I had my druthers, I would live in San Diego, California, but, alas, I cannot afford it so Florida is my substitute.

Enjoyed our game but if you knew how much I had to pay Billy and Joe... :-)

I'm pretty sure the gal in the promo wasn't from Michigan. They all are wearing long socks to cover their knees and more this time of year.

My visiting experience to FL was limited to several days running, for a work related conference, and the conference destination was Panama City in March. My conference commitments finished up mid-to-late afternoons, and I was content with walks on the 'Emerald Coast' beaches and sampling the Southern seafood cuisine. I can envision FL to be a backdrop for promotional video filming nearly year round.

David walked by when I was looking at your pics and saw the promo girl. He says, "Is that my girl?" Did I tell you he is getting a bit doo lolly? Dianne

I'll be there in Florida in two weeks, and I'm sure looking forward to the sunshine and palm trees! Love your pretty promotional video lady. :-)

Well Olga, the ONLY reason I photographed that woman is to show that the stereotype isn't true ... Florida is not just for us old retired folks. There's the proof! But Dianne, perhaps David isn't as doo lolly as you think!

I understand they make a lot of promotional videos in Florida. You wouldn't know anything about this, would you?

Glad you're back in New York. You made it back just in time for the second round of the Polar Vortex. Heard it wasn't going to be as bad as the first one, when temps were in the single digits. That's comforting. Also heard Long Island is going to be hit with up to two feet of snow.
Yup. I'm sure you are glad to be out of Florida and that awful traffic on 41, the Tamiami Trail (which every local knows to avoid like the plague). Snow and freezing temps vs a few bugs and humidity.
Are you sure you're a man? And not some woos?
M

While you were there, did they by any chance shoot a promotional video? I’d have thought so, wouldn’t you?

I have never been a big fan of Florida: too buggy, too humid, too flat, and too crowded. And, don't even get me started on their politics and their contribution to American culture: hanging chads.

It is warm in winter, I'll give them that.

I like dry air and some topography in my winter destination. Tucson is for me.