"A long memory can drive a man crazy."
-- Brit Bennett, The Vanishing Half

Doing My Bit to Create Buzz

First of all, for those of you who don't know, the South by Southwest conference, also known as SXSW, is a gathering of people from the worlds of technology, music, film and fashion. It began in the 1990s, and now takes place every year in March in Austin, Texas. This year the festival runs from March 9 through March 18.

Honestly, I only know about it because my son works in the music business. He went to the conference last year for the first time. And this year he again traveled to Austin to spend the weekend schmoozing and networking. But aside from that, SXSW apparently really is a gathering of hipsters, geeks and cool cats -- people who, for better or worse, are developing the future of our social and virtual universe. 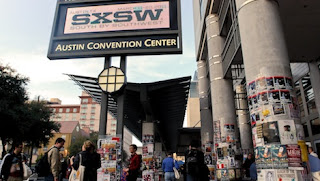 SXSW is famous for introducing many new things in our lives, from the singer John Mayer, who wowed the audience in 2000 and because of that signed his first recording contract, to Twitter, which captivated the crowd in 2007 and began its rise to social media stardom. (For the record, while I do Facebook, I do not do Twitter, because it just seems kind of silly to me. I'm not a real John Mayer fan either -- but then I'm not the target audience of the SXSW crowd.)

But anyway, for those of you who want to know, I have it on good authority that this year's most talked-about item is something called "ambient social networks." These are location based applications for your smartphone -- one is called Highlight -- that merge Facebook and GPS technology to tell people who in their social network is currently located in their vicinity.

So, with an ambient social network app, you can be sitting in the food court at the local mall, and just by glancing at your iPhone you can see if any of your friends -- or friends of your friends -- are sitting nearby. Maybe the guy at the next table went to the same college as you did. Maybe the woman in line over there shares two friends with you.

Does this sound cool to you, or a little creepy?

Of course, the flip side of that comes not when you're tracking other people, but when other people are tracking you. Just as you can see somebody else's name, and their photo, and the names of their friends, so others can see your photos and background and friends. And do you really want other people at the mall to be walking around knowing where you went to college, and who your friends are? Isn't that kind of weird?

I can see this application being very useful to young guys at a singles bar. It could really improve their pickup lines. But that's not going to be helpful to me -- I'm long past that phase in my life.

But I do see another concrete benefit. You are introduced to someone at a meeting, but of course you forget their name. A week later you see them again at a party. You panic. You should remember their name ... and where did they say they work? Presto. Check your iPhone. "Well, hello Mr. Jones, how's your son doing at Stanford? Did you get out to play golf last weekend?"

If you think I'm making fun of "ambient social networks," I'm not the only one. Check out "The Highlight SXSW Drinking Game."

But maybe people making fun of an application actually helps create the buzz. That's okay with me. I myself don't plan on using this app. anytime soon. First, I'd have to get a smartphone! But I don't mind doing my bit to promote technological progress.
Posted by Tom at 2:11 PM

My cousin Peter works these Conferences. He makes a pretty good income. I hope your son does too. It is rough and involves much travel and time away from home. Dianne

I don't even have a smart phone, but maybe this would be an application I could use. You know, for those times when I see someone I worked with for twenty years and suddenly cannot for the life of me remember his/her name.

Possibly pushing the "6 degrees of separation" a bit far.

It all sounds a bit creepy.

Everybody'll be a CIA agent!

I'm already overloaded as it is!

I'm thinking on the creepy side. It would be the perfect tool for a stalker.
That said, I could use that as a name remembering tool.

i don't have a smartphone (yet) and the whole idea sounds futuristic- but I guess the future is now. But after thinking about it, maybe the app will help us dudes when we are in our 80s and 90s and can't remember who or where we are - suddenly we will not only know where we are but who else is with us!

Intriguing stuff, but it didn't cause me to rush out and buy a smartphone. Probably the next cool app will do it.

The Internet and cell phones already allow way too much personal information to float around for whomever wants to see it.

Doesn't anyone want any privacy anymore? I vote for creepy.