How to Grow Old

I just finished reading a recently published book, 30 Lessons for Living: Tried and True Advice from the Wisest Americans by Karl Pillemer. I'd heard about it a while ago and placed a hold at my library. (I don't know about you, but for me it typically takes a few weeks to get a "held" book from the library, usually because someone else has it checked out.) Then, coincidentally, The Week magazine is running an excerpt from the book in its current issue.

Author Pillemer takes the position that people over the age of 60 are the wisest Americans. Why? Because they "possess a deep knowledge of just about every problem a human being can experience." In the book he gathers advice on how to maintain a happy marriage, raise your children, build a successful career. But the perspective I found most valuable centered on how to approach the inevitability of old age. 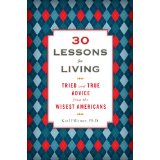 He reminds us that we Baby Boomers (Pillemer and I share this dubious distinction) have an especially difficult time comprehending the reality of growing old. After all, we are the ones who didn't trust anyone over 30, who invented the Peter Pan syndrome.

"For many Baby Boomers, turning 60 is a fairly significant shock," he says. "The generation that believed it would be young forever, clearly will not. The boomers are having a hard time with the existential reality of life not being one open-ended opportunity after another."

This statement came as a shock to me because lately I've found myself thinking:  I'm having a good time in life. I'm not doing much of anything -- my kids are grown, my career is over -- but I'm happy and I love living with B and I like hanging out with my friends and I enjoy watching the world. I don't want my story to end.

I think maybe the death of Steve Jobs brought on my recent pensiveness. It's a shock to my system when I hear that someone younger than me has died. And Jobs was only 56 when he left us last October. But also, he seemed so much a part of our lives, for so long, and he was leading the way into the future. And now, suddenly, for him there is no future.

So I looked to Pillemer's experts for advice on how to approach my prospects for aging. The first thing they said is: Don't waste your time worrying about it. It's a process no one can escape.

The fear of aging is rampant in our society -- we imagine what life must be like based on old stereotypes, rather than real individuals who can actually tell us about it. And as one sage said, "Being old is much better than we think it is."

For one thing, we can do pretty much what we damn well please, and nobody is going to fault us for it. We're not tied down to a job or a family, and so we can go wherever we want. Most of us are no longer constrained by social restrictions, either. They somehow shed their power as we grow older and realize how manufactured they all are. We are free to drop old resentments and rekindle relationships. We can accept or turn down invitations based on what we really want to do, rather than factoring in who we need to impress or who we might offend.

One man reveled in the volunteer activities he's doing. "I enjoy the opportunity to share whatever advice I might be able to offer. You can't do that when you're 20. You haven't built a body of experience ... yet in the part of life I'm in now, you can put all those pieces together and offer to society the benefit of what you've learned."

Ironically, most of the older people said they do not think about death too often. Or, as Pillemer concludes, "The intense, overpowering fear of dying is very much a young person's game."

When one older woman was asked if she believed in life after death, she responded, "I wonder if there really is. I wouldn't bother worrying about it too much, because I'm going to find out." A 94-year-old woman said, "I'm not afraid to die. Nobody knows where we go, and we'll never know because that's a mystery. Like my husband used to say, 'If you go to heaven, how wonderful. But if you go to sleep, what's wrong with that?'"

While many elders seem matter-of-fact about dying, they do agree on one thing: Plan for the journey so you don't leave a pile of problems for your family. They advise people to get organized, tidy up their homes, their belongings, their financial situation, so people will know what to do after you're gone. Some people even take comfort in tidying up their lives -- seeing it as a metaphor for bringing disparate elements together in a meaningful way, rather than leaving everything in a disorganized jumble of unrelated parts.

The wisest Americans also agree that it's crucial to stay connected as you get older. Some people are lucky and remain tied to a stable social network until the day they die. But if you do lose important people in your life, you need to develop new relationships. Human beings are not meant to live solitary lives, and all the research has shown that meaningful roles and satisfying relationships are strongly correlated to emotional and physical health. But it can sometimes be a challenge. So take steps to remain engaged -- move near your children, reach out to new friends, join a club or social group or support group, sign up for an event at your library or a class at your community college.

Also, before the aches and pains of life slow you down too much, figure out where you're going to live. Maybe the decision is as simple as staying in your old family home, or moving to your long-held dream house at the beach. But you need to consider if you should move to one-level house, because at some point you might find it difficult to negotiate stairs. You might have to face the question of whether or not you're ready to give up your home and live in a group situation. Many older people now reside in independent or assisted living communities. Almost without exception, they were initially reluctant to make the move, but later said it was one of the best decisions of their lives as they realized the lost independence was more than made up for by new opportunities.

One elderly sage summed up, "I have found each decade, each age, has opportunities that weren't there in the previous time. There've been joys in each stage of my life. The thing is -- people are so afraid of getting old. Don't worry about it. It's an adventure."

I'd love to hear about your joys, opportunities, surprises or insights about growing older. Because there is one thing I do know. We're all in this together.
Posted by Tom at 1:12 PM

Sounds interesting. The one thing that I know about old age: money helps.

Great post. My wife and I spend as much time as we can traveling and seeing the world before health issues slow us down. We don't want to be one of those couples who say they'll wait until they're retired or can afford to do something because then it's often too late.

We relocated to the beach when I was 60 and began to say yes more often to opportunities. We travel more as we do not know how much longer we will be healthy. Hub still works full time and I work part time, but our priorities are different. We do not care about promotions and office politics and other extraneous stuff - we do the jobs we enjoy and let the younger ones stress out.

As I was reading this post my wife came into the room and told me that Davey Jones of "The Monkees" died today of ah heart attack at age 66.

Thank you for this!
Just what I needed on this snowy dark night. :-)

I almost have a headache from all the head bobbing agreement as I read your post. You are spot on and I totally agree.

I have decided those age 60+ can be too pensive. My daughter is now 50 and beginning to think about this stuff.

I am over the hill and think there is too much denial concerning the end of life. Aging isn't for sissies, as anyone with health challenges knows.

I agree with Kay, money helps. It doesn't have to be a lot, only enough. Dianne

I've been retired for 18 years and still don't know what I want to be when I grow up. It seems continuing to search for your ultimate calling works rather well.

I agree that each stage of life is an adventure, Tom. I am truly enjoying being older -- and what a surprise that is! I look at least my age -- nearly 67 -- and it's wonderful to let go of the need to fit a certain standard of beauty, to say what I think and do as I wish. It's wonderful to have more control over one's time -- however much time one has. (Davy Jones' sudden death is, indeed, a shock, as was Steve Jobs'.) I think the closer one gets to death, the less one fears it. Before the parental generation of my family died, death was more remote and truly scary. But now, while I hope my own is a ways off, the thought doesn't upset me the way it used to. And, after having cleaned out the houses and settled the lives of my parents and Aunt Molly, I'm determined to leave a more orderly life and home.

This was a very spot-on, thought provoking post. Thanks so much!

I guess I don't agree with the author saying because a person lives for a certain length of time, they become wiser. They definitely become older, but that's about it, in my opinion. I believe folks who possess discernment, good judgment, and the ability to be discrete about things come in all ages. However, as a person who has just turned 60 in the past year, I agree with Mr. Pillemer that it has been (and continues to be) quite a shock! My feelings about many things are evolving due to physical changes as well as psychological ones, one of which is an increased sensitivity to the way I think I am being perceived by other people, especially when it applies to employment opportunities. I find it challenging to separate the "facts from the fiction" in my mind and hope I can one day achieve the state of serenity some of the posters here have realized.

Thanks so much for these comments on my book! I personally learned more than say from the hundreds of older American's we interviewed. Our 'Cornell Legacy Project' website has many more lessons, as well as videos of many of the elders sharing their lessons.