We Walked to Fight Cancer

I went on the Relay for Life on Friday night, sponsored by the American Cancer Society. I say Friday night, but the relay lasted until Saturday morning. B was a team captain. A friend of hers had breast cancer last year, underwent surgery and chemotherapy, and came out a survivor. Now she was active in the Relay, and B wanted to show her support by fielding a team.

It was a lot of work. B recruited about a dozen volunteers to either contribute money, or walk in the relay, or do both. She registered her team, collected the money, organized her campsite for the overnight walk. She went to three or four meetings, made dozens of phone calls and sent endless emails.

I was happy to make my contribution and volunteer to walk. I know B's friend, and also wanted to show my support, and of course I was going to help B. And there was something else lurking in my mind. My older brother died of Hodgkin's lymphoma when he was 23 years old. My mother had breast cancer, not once but twice, and it ultimately killed her. My dad lived to age 91. But what got him in the end? You guessed it: cancer. 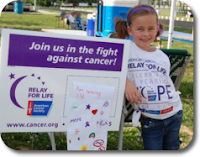 The point of Relay for Life is to raise money -- for research, for hospitals, for support groups, for victims who don't have sufficient medical insurance. But it seemed to me that way too much of B's work went into ancillary activities that didn't matter -- getting people registered; making sure the forms were filled out properly; scheduling people to make the walk. I have to confess, by the time the event finally rolled around, I had a bad attitude about it. Too much bureaucracy, I thought.

"So how many teams are there?" I asked B. We live in a small exurban town. I thought there might be 10 or 12 teams.

"Oh yeah, a lot of people are involved, for sure. I heard one team has 58 people on it."

This thing was bigger than I thought.

Friday evening arrived. B assigned me the job of buying drinks and ice and hauling our big ice chest over to the middle school, where the relay was taking place. B's co-worker was furnishing a tent. B was staying overnight with two of her friends.

We pulled into the middle school about 5:30 p.m. It looked like a scout jamboree was going on. We found our preassigned spot on the field, unloaded the car, set up a card table and some chairs. B's co-worker arrived with her husband and they set up the tent. We saw a neighbor in the next tent over from ours. The town supervisor was sitting with half a dozen people under a tarpaulin behind us. A trailer from the county parks department was parked up against the main road, facing the field, and soon a rock band started playing.

Groups of people sat by their tents. Other groups wandered around. Team leaders like B wore their official t-shirts, saying:
Celebrate
Remember
Fight Back

The mission of the relay is to celebrate the survivors and caretakers, remember those who have died, and urge people to fight back against cancer, not only by giving money, but by raising awareness, getting tested, supporting those who have the disease.

An opening ceremony featured a speech from the husband of a woman who had recently died of cancer. He spoke of "the monster" that had invaded their lives and taken the life of his wife.

A group of kids performed a dance; a karate group gave a demonstration; a man and woman sang folk songs. Then the walk began. The first lap of the relay was taken by cancer survivors and their caretakers. Not that many. About 30 - 40 people. Then a bagpiper led the rest of us around the track. Each team would have at least one member walking on the track, all night long, until early Saturday morning.

After a while, B sent me out for Kentucky Fried Chicken, which I brought back for our team. A couple of women in our group were selling homemade cookies. People at other tents sold food and drinks, books and t-shirts -- all the money going to charity. A 20-something boy climbed up on stage to play guitar. B and I took a few more laps around the track. More team members came in; a few left.

Around 10:30 p.m., on a lap around the track, B and I met up with her friend's husband, who was helping with the lights and the sound system up on stage. He looked happy -- happy that there was a good turnout, that all these people were out to support his wife and the others he now knew who were fighting cancer. He told us, at last count, there were 42 teams, and the event had raised over $90,000.

B was staying all night, but I was going home to walk the dog and get some sleep. She was expecting another friend of hers later on, a nurse who was stopping by to take a few laps on her way home from work, around 1 a.m.

As I headed back to the car I looked at some of the lanterns, called luminaria, that lined the track -- paper bags with sand on the bottom, and a candle inside. As darkness fell, kids from the high school circled the track to light the lanterns. Each one was dedicated either to a cancer victim, a survivor, or a caretaker. Each candle lit up the message written on the side of the bag.

The lanterns produced a soft glow around the track. I was amazed at how many there were. I took one more lap around the track -- I had to count them. To be honest, I lost count, but it was somewhere around 720 lanterns, one for each person, plus a few that offered more general messages of encouragement:  "Live Life to the Fullest." Or, "Stay Strong."

Most of the messages were very brief and personal: "In memory of Poppa." Or, "Aunt Anna, We Will Miss You Always."

Some were tough to read. "To Dad, My Strength and My Hero." I wondered, was he dead or alive? There was no doubt about the next one, but the future looked daunting: "Uncle Abe -- Keep Fighting." Then I saw this one: "Dear Grandpa, We will love you for every second of every hour that we breathe on this earth. We know you are now in a better place . . ."

I was back at the field at 6 a.m. on Saturday, to bring coffee to B and her two friends and two teenage girls who'd spent the night with them. We broke down the tent, cleaned up after ourselves, and watched the closing ceremony, featuring a thank you from a local organizer and a prayer from a clergyman.

Finally, a little after 7 a.m., B slumped into the car, looking pretty tired. "Did you get any sleep at all," I asked her.

She leaned her head back against the seat. "I remember when I went into the tent. I slipped into the sleeping bag, pulled up the extra blanket. I thought I would be exhausted. But I lay there for a minute. And I realized -- I was doing something important. I felt great."
Posted by Tom at 10:07 AM

Hi Great to stumble on your blog! Have you heard of FAMEDS? Freedom of Access to Medicines is the non-profit leading the effort against the FDA from disproving the drug Avastin this month, as it is working for 17,500 women with Metastatic Breast Cancer. Please sign and share the urgent petition: http://fameds.org/petition.php

A very well-written story. I had no idea those events were so big, but we all know more than one victim of cancer. In our family, it's stalked through our ranks like evil on the hoof; all of us who remain expect to encounter it personally some day.

Lately, I've been reading Mukhurjee's The Emperor of All Maladies. I recommend it, although it's not an up-all-nighter; more like a few sittings punctuated by days, weeks, or months of breaks. The writing warrants that I read on, but the subject...? Well, you know.

I lost both my parents to cancer. Had a close call with my wife and melanoma as well.

It's amazing how a few dedicated people can sow the seed that grows into a major event. Congratulations and thanks to all who were involved.

Thank you for doing the relay. You have done it for me too, here on the other side of the big pond. I too am a survivor.

I am in awe of the effort, the result, the spirit.
Thank you from another survivor.

You did something great too. Thank you!

I agree with Linda. You did do something great. This was a very touching post.