A Modest Proposal About Debt

I saw over the weekend that the national debt has now climbed up above $14 trillion. That comes down to about $146,000 for every man women and child in America, or over half a million dollars for a family of four -- and that's on top of your mortgage, the car loan, the credit card balance and your college loan.

Honestly, that's too big a problem for me to handle. I'll leave that one to someone else.

However, as we all know, state and local governments have also run into a lot of financial trouble. New York's budget gap this year is $9 billion. New Jersey has an $11 billion gap. Illinois $12.5 billion. California $25 billion. The Badgers -- who have gone very public with their family financial fiasco, and where things have gotten pretty nasty -- suffer a gap of only some $3 billion. 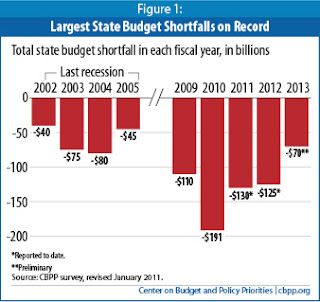 Now, while I don't have a clue how to solve the problem of $14 trillion, I do have an idea for how states can cover their billions.

Have you been out on the road recently? If so, you know everyone speeds. So here's my debt solution:  Every municipality in America should issue a speeding ticket to every licensed driver in in their jurisdiction

Don't try to tell me you're not guilty. Everyone speeds! You don't need a judge and jury to figure that one out.

If you go out on the highway for just a few minutes and travel the speed limit, you'll get run over by people in the left-hand land, people in the middle lane, and people coming behind you in the so-called slow lane.

Not to mention local drivers. The lady down the street from me, in our little development, hits 40 mph between the corner and her driveway -- a stretch that's maybe 200 yards. And where the speed limit is 25 mph. And believe me, she's not the only one.

I live in the State of New York. There are more than 11 million drivers in New York. In my town, if you get a ticket for going, say, 20 miles an hour over the speed limit, the ticket costs $80. (Don't ask me how I know . . . let's just say I know.) On top of the local fine, the state imposes a surcharge of $125. Yeah, the surcharge is more than the actual fine!

Anyway, so this plan -- which, let's face it, is perfectly fair and reasonable; who among us has not exceeded the speed limit at least once in the past year? -- would result in the State of New York taking in a little over $2 billion. But as you can see, that's not nearly enough to cover its budget shortfall.

So the state government will have to do what governments do best -- expand the program. We can give a ticket for aggressive driving to every person who commutes to work more than ten miles a day. Have you seen those commuters? Guilty!

We could issue a ticket for tailgating to every male driver under the age of 30. Is anyone going to try to claim they're innocent? Add to that a ticket for driving while distracted -- you know, while talking on a cellphone, or combing your hair, putting on makeup, eating a Big Mac or drinking a Starbucks. I'm not sure if all of those activities are illegal -- it is illegal to drive while talking on a cellphone in my state -- but all of them are very dangerous.

And so, you know how they talk about "unintended consequences" of the most well-intended laws and regulations? Well, one unintended consequence of this plan might just be that drivers will slow down a bit out on the highway. Maybe even save a few lives. That wouldn't be a bad thing, would it?
Posted by Tom at 9:43 PM

Good idea! I wonder how it can be made seriously discussable.

wow 14 trillion, we all better get part time jobs?

The solution is painful, but we must fix the debt situation. Sadly, increases in taxes are on the horizon. We can also cut..seriously. My senator Mark Warner is a member of the gang of six senators trying to work out a sensible compromise. The are beginning with the Simpson Boyle Debt Commission recommendations. I hope they follow through. Dianne

Not a bad idea at all. What a concept - enforcing the laws.

Uh, why do I have to pay anything to help get either the federal or state governments solve their out-of-control debt spending? This is preposterous. Do you really think if all the people paid a speeding ticket it will solve the deficit? All you are doing is giving reckless elected officials more reasons to keep on spending and building bridges to nowhere.

If I racked up tons of irresponsible debt, having someone just give me more money is NOT going to solve my spending habit.

Would you give an out of control alcoholic another drink to solve his drinking problem? Then why should we give the government any more money? Duh?

Know how the govt can reign in their $14 trillion dollars of debt? STOP SPENDING. or wait until the Chinese stop lending. The Feds are scheduled to close down in another 2 weeks. I say, let them close down. It'll do all of us a world of good.

I already pay enormous taxes, the highest in the US. I also live in NY. Have paying these taxes, fees, tolls etc. etc. solved anything? The roads still suck, the schools are a joke and benefits are still out of the hemisphere.

Not bad! Well worth the price of admission. But they'd have to either hire a ton of patrolmen or allow for citizen's arrest. I like that latter one, which says something about how much working class road rage I've been building up lately.

You managed to hit the nail right on the head and explained out everything without complication.You gave me some important tips. Thank you. Keep on posting interesting article.
Debt Relief

But wouldn't it raise your insurance rates? I don't think you'd feel the need to enrich their coffers. I don't.

By hand register your site with DMOZ, also known as the Open Directory Venture.
SEM

Styled after health club rowers that can cost hundreds more, this piece of fitness equipment is designed with a fully enclosed air resistance system.
Espresso Makers

We want to put you on your right road out of debt so you can stop worrying about money Financial Problem sIRS debt.
Bankruptcy

Far too often, people file for bankruptcy unaware of what may happen and how bankruptcy will affect their debts and assets. Don’t fall into that trap.
bankruptcy filing

But, this little investment could save you hundreds or thousands of dollars- not to mention countless hours of stress and anxiety wondering what might happen.
illinois bankruptcy

Ted Connolly is a lawyer in the Boston office of a large, international law firm, where he concentrates his legal practice in bankruptcy and finance law.
how to file for bankruptcy

The key to free home schooling for your kid is to take advantage of resources already available to you, but you may not realize or think of it.
how to home school

You should look at it as you would any major financial decision, such as buying a house, buying a car, or taking a vacation.
arizona bankruptcy

This quality product and also the excellent packaging and delivery from Amazon . com chose to make this buy a enjoyable experience.The kettle is well-crafted and solid searching without having to be overweight.
andriod