You Think THAT'S an Insult!

One thing people probably agree on is that our world has become coarser. People don't hesitate to insult people on Facebook or anywhere else online. As Vivek Murthy and Alice Chen wrote on CNN.com, "The values of social media [are] sensationalism, us-vs-them rhetoric and curating one's life to look perfect."

And no matter where you go you can't get away from the cursing. It used to be the most common word in the English language was the. Now it's a word that begins with F.

Of course, insulting people is nothing new. But it used to be done with more class, more panache. Here are some examples: 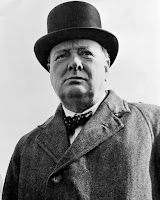 Said New York theater critic Walter Kerr about a rival: "He had delusions of adequacy."

Or Winston Churchill about a fellow politician: "He has all the virtues I dislike and none of the vices I admire."

Winston Churchill was always good for a laugh. Playwright George Bernard Shaw once sent a note to Churchill: "I am enclosing two tickets to the first night of my new play. Bring a friend, if you have one." Churchill's reply: "Cannot possibly attend first night. Will attend second ... if there is one."

Or how about another retort. A member of Parliament told Prime Minister Benjamin Disraeli, "Sir, you will either die on the gallows or of some unspeakable disease." To which Disraeli responded, "That depends, sir, on whether I embrace your policies or your mistress."

William Faulkner insulted fellow novelist Ernest Hemingway: "He has never been known to use a word that might send a reader to the dictionary."

Another writer, Moses Hadas, sent this response to a colleague: "Thank you for sending me a copy of your book. I'll waste no time reading it."

Okay, here's a groaner from movie director Billy Wilder: "He has Van Gogh's ear for music."

Some go for the jugular, like this one from lawyer Clarence Darrow: "I have never killed a man, but I have read many obituaries with great pleasure." 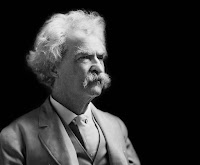 Or Mark Twain: "I didn't attend the funeral, but I sent a nice letter saying I approved of it."

And then American journalist Irwin S. Cobb: "I've just learned about his illness. Let's hope it's nothing trivial."

Some insults are fairly subtle, but no less cutting. Oscar Wilde remarked about one person: "He has no enemies, but is intensely disliked by his friends."

Or British statesman John Bright: "He is a self-made man and worships his creator."

Then the old Samuel Johnson who said of a fellow Englishman: "He is not only dull himself, he is the cause of dullness in others."

Actress Mae West was always good for an insult: "His mother should have thrown him away and kept the stork."

American actor Forrest Tucker along the same lines: "He loves nature in spite of what it did to him."

Here's one from Scottish writer Andrew Lang, to keep in mind whenever you're reading something on Facebook or anywhere else on or offline: "He uses statistics as a drunken man uses lamp posts ... for support rather than illumination."

And finally, another from Oscar Wilde: "Some cause happiness wherever they go; others, whenever they go."

Baby bomers are already being abused in the retirement homes, and the only way you baby bomers will escape this fate is by killing yourselves before you reach the stage of life where you are old and helpless.

You deserve this for destroying your own children's future. No one is coming to save you. Suicide is your only hope.

These were fun and clever. Brevity and wit will always leave the biggest impression.

These are sure fun. I just read them to my hubby and got a good laugh from them again. Thanks! :-)

These are great. May have to steal some.

People back then had a way with words. i am old enough to remember when nobody, except the lowest gutter-snipes, used foul language in public.

Hi Tom! These were exactly the sort of laugh (and sense) I needed today. Thank you! ~Kathy

Great collection of intelligent insults. Anyone can use fowl language and childish put-downs. Thanks for the laughs!

Wonderful collection Tom, some I'd heard before. I've always like Mark Twain's "News of my death has been greatly exaggerated" and the wonderful wit of Dorothy Parker:
"If you want to know what God thinks of money, just look at the people he gave it to.”
“In youth, it was a way I had, “The first thing I do in the morning is brush my teeth and sharpen my tongue.”
XO
WWW

Another from Winston Churchill which makes me laugh:

Lady Astor: "Winston, if I were your wife I'd put poison in your coffee."

Winston Churchill: "Nancy, if I were your husband I'd drink it."

My gosh Tom, what an entertaining read! I hope such days of clever retorts aren't behind us. I was in downtown (Pittsburgh) yesterday waiting for a bus, and 2 men at my bus stop kept yelling "F--- YOU!" and "WELL F--- YOU!!" back & forth at each other, I just thought how sad that's the go-to expression for so much now.

Thanks for the additions ... I'll start a collection for a post on More Insults.

I'm so happy my broken Marriage has been restored and my Husband is back after a breakup that leaded to fight, After 2 years of marriage Dr PADMAN brought a smile to my face again thanks You Dr Padman

I am very happy today with my family. My husband left me for a good 6 months , and i love him so much, i have been looking for a way to get him back since then. i have tried many options but he didn't come back home , until i met a friend that introduced me to Dr.Padman https://padmanspell.com a spell caster, who helped me to restored my marriage back again Me and my husband are living happily together today,i believed Dr Padman so much today i am glad to let the world know that this spell caster have the power to bring lovers back, because i am now happy with my husband. Dr padman is a great spell caster , you can contact him via padmanlovespell@yahoo.com Now i will advice any serious persons that found themselves in this kind of problem, You can contact him Via his email padmanlovespell@yahoo.com or add him on whats-app with his WhatsApp +19492293867 Website: https://padmanspell.com

It’s obvious some patients with herpes are being enslaved to the antiviral and other supplementary Orthodox medicine just to help suppress the virus and not a cure. I have been with the virus since 2015 until I was introduced by a blogger who also narrated her story online on how she was cured of Genital Herpes after using Dr Sikies Herbal Medicine. This is a year and 2 weeks since I was delivered from genital Herpes. All thanks to God for using this Great herbalist to heal me. I have promised to keep telling good things about Dr Sikies. Please feel free to share Your problems with him and don’t forget to tell him I did refer you to Him. Thanks. Write him on mail Drsikies@gmail.com He deals with Alzheimer virus, Cancer, HIV, Herpes, Genital, warts, ALS, BV, UTI, Virginal infection, Genital, Wart, HPV, Hepatitis A/B, Good luck, HSV, Pregnancy, Ex back.

here is his website:https://drsikiesherbalcure.weebly.com

you can reach me via mail:anitalawson515@gmail.com