Do You Know Your Geography?

We've been planning a trip to Wisconsin for a couple of months now, to see my daughter who moved there in the spring. So I've been spending a lot of time hunched over maps, drawing routes on google, checking out the states we will drive through -- Pennsylvania, Ohio, Indiana, Illinois and Wisconsin.

It's still up in the air about whether we will actually hazard this trip, considering the rise in Covid-19. But for all the aching back I've suffered in the planning, I have come across a few geographic surprises. I thought I'd share them with you, in the form of a quiz. So how much do you know about these United States of ours? Answers are at the bottom of the page.

1. I used to live in New York State which is larger in area than Pennsylvania. But is New York larger than Wisconsin? So you tell me, which covers a larger area, New York or Wisconsin?

2. Then which of these states is larger -- Pennsylvania or Ohio?

3. Going farther afield (and out of my way), how about Florida or Idaho -- which is larger, area-wise?

4. Now to population. Which state has more people, Wisconsin or Indiana?

5. How about Pennsylvania vs. Illinois? Which one has the larger population?

6. Okay, back to Idaho. Which state has a larger population, Idaho or Hawaii? 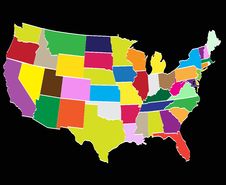 7. Do you know the capital of Wisconsin -- is it Madison or Milwaukee?

10. The other place I like to visit is South Carolina. Is the capital Charleston or Columbia?

Bonus:  I'm sorry I had to research this question. But it turns out that Wisconsin has twice the rate of Covid-19 as Pennsylvania -- just as many cases, with half the population. Which state currently has the most cases of Covid: California, Florida or Texas?

1. Wisconsin at 65 thousand square miles compared to New York's 55 thousand. 2. Pennsylvania edges out Ohio, with 46 thousand sq. mi. compared to Ohio at a little less than 45 thousand. 3. Idaho. This one surprised me. Idaho is larger than Florida, with 84 thousand sq. mi. compared to 66 thousand 4. Indiana at 6.7 million people compared to Wisconsin's 5.8 million. 5. Pennsylvania wins at 12.8 million compared to 12.7 for Illinois -- Illinois used to be more populous but it is one of the few states that has lost population in recent years. 6. Idaho wins again, with 1.8 million compared to Hawaii's 1.4 million. 7. Madison. 8. Hartford. 9. Trenton. 10. Columbia. Bonus: Florida, with a seven-day average of over 11,000 new cases; Texas is averaging 10,000 a day and California 9,000. Pennsylvania has fewer than 1,000 cases a day.

Email ThisBlogThis!Share to TwitterShare to FacebookShare to Pinterest
Labels: Quiz

Interesting facts but yikes, geography ranks right up there with math as my most avoided subjects. I did know the bonus question however as I am from Florida originally and they have made the news daily.

Only answer I was pretty sure of was the last. Knew Florida was beating us (Texas) in Covid cases - but not by much.

I live in Ohio and know absolutely nothing about geography. Thank goodness we have google LOL. I have been to Wisconsin twice, once going to Minnesota for a 4-H advisor conference and once more on the way home. I remember lots of hilly farm fields, very friendly people and a wonderful stop (not so sure with Covid) called the Mouse House Cheese House (I believe). They had an amazing selections of cheeses, the best aged cheddar I ever ever tasted and at that time offered free samples. I would love to travel back just to stop there. Hopefully, someday, hopefully

Drive up to Ludington, Michigan and take the steamship across to Manitowac, WI. Saves time, is enjoyable. You can drive up to Door County for a super vacation, down to Sheboygan for a great town and the Kohler Museum. Drive to Madison (the Capital) for an excellent vacay.
I love Wisconsin’s state motto, “come smell our dairyaire”

I'm not sure I knew any of the answers for certain (my excuse is I'm not from the US) but I'm pretty happy with the six that I scored via my best guesses. Unfortunately, the best guess approach didn't seem to work so well during my exams, albeit they were a long time ago! On the exams topic, I can also tell you that watching a movie of Shakespeare's Macbeth doesn't replace actually reading the play, as my English Literature exam result from school showed!

I knew all the capital cities and that Florida is leading the COVID 19 cases emerging. I don't bother my head with anything related to measurements/numbers. I guessed correctly four times, but they were guesses on area and population.

I thought I knew my geography, but you stumped me on quite a few!! Hope your trip is super safe if you decide to go.

Life is a guessing game! Lol.

Years ago spent a lovely afternoon in Hudson, Wisconsin. Lunch at a beautiful restaurant overlooking the lake.

Herpes is a serious and recurrent condition that cannot be cured by drugs or injections by US doctors, but the best way to fight against herpes is to take natural herbal remedies, I red about DR JAMES, the great herbalist who cures people of herpes  virus with his powerful herbal medicine. I contacted him to find out how he could help me and he told me never to be afraid that he would help me with the natural herbs medicine! After 2 days of contacting him he told me the medicine is ready and he sent it to me via DHL COURIER SERVICE and it got me in 3 days! I used the medication as he prescribed for me (MORNING and EVENING) and was cured! It's really like a dream, but I'm so happy! For people suffering from the following diseases,Diabetes, cancer,Pcos, hypothyroidism, Herpes, COPD, HIV, arthritis, Hpv, infections, liver disease, autoimmune diseases, Parkinson's disease, Lupus and more should contact him for his herbal medicine, because I am a living witness and I was cured of herpes virus. and DR James medicine is legitimate. I sent him what he asked for and he sent me his medication which I took for 2 weeks and today I am here with a negative result. When I went for the test, I was so happy after I took his herbal mix medicine.
CONTACT DR JAMES FOR A PERMANENT CURE  Email: drjamesherbalmix@gmail.com
WhatsApp  +2348152855846