Living in the Time of Coronavirus

It's time for me to report on some doings from fellow baby boomer bloggers. As usual, we Okay Boomers are doing lots of different and interesting things. But it shouldn't come as a surprise that the Coronavirus is on people's minds, especially for us, ahem, older people. I saw recently that the death rate from COVID-19 is virtually 0% for people under age 20. But it's above 10% for people over age 70 who often have underlying medical issues.

If you ask me, that is pretty scary.

First of all, on the Survive and Thrive Boomer Guide Rita Robison, consumer and personal finance journalist, advises people Don't Fall for COVID-19 Scams. Fraudsters are setting up websites to sell phony products, she tells us, and they're using fake emails, texts and social media posts to take money from consumers and steal their personal information. She offers six tips to avoid falling victim to the bad guys on the internet.

Then Carol Cassara at A Healing Spirit chimes in with Hang On, Bumpy Ride Ahead. In her post she gives us a measured perspective on the disease and offers some legitimate, common-sense precautions that can keep fear and anxiety, as well as the virus itself, at arm's length.

(Which brings to mind a quip I saw on Facebook the other day, when one wag deadpanned: "It disturbs me to find out so many people think that washing your hands is 'the next new thing'.")

As if the Coronovirus is not enough to worry about, Rebecca Olkowski with BabyBoomster.com warns us of another scam. She is currently looking for a new apartment. It's not easy to find an affordable place in Los Angeles (the 12th most expensive city in the country, so it must be even harder in places like New York, Washington, Seattle and Honolulu). In Beware of Rental Scams: How I Almost Got Duped she tells a harrowing tale of how she thought she had the ideal place . . . and then the guy started making excuses. Check out her story, realizing that we can apply the lessons learned to any transaction we plan to make over the internet.

Not to be deterred by the prospect of catching a communicable disease, Meryl Baer attended a crowded Bar Mitzvah last week. No, she wasn't worried about the Coronavirus. Instead the experience led her to ask: Have you ever felt ignored? She believes the experience is pervasive among the older generation. People admire and pay attention to the young. Not so much to the old . . . especially older women. So attending this milestone celebration, Baer keenly felt her age, which she tells us about in The Invisibles.

By contrast, Jennifer of Untold and Begin is going solo -- in the sense that she has recently started participating in a photo challenge. It's called Sunday Stills, with a different theme every week, when everyone sends in their photos to share with the group. In How Do I Get Near and Far? Jennifer tells how she struggled with the theme of "near and far" -- until she looked at her bookcase and found inspiration in a particular memory. 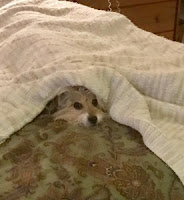 Finally, in Did the Crate Change, or Did Libby? Laurie Stone of Musings, Rants & Scribbles brings us a debate for the ages. Should her terrier, Libby, be allowed to sleep with her and her husband at night . . . or should the Yorkie be made to stay in her crate? Practical people remind Laurie that Libby is a dog. "Don't allow her on furniture of any kind, much less the bed," they say. But then there are the softies. "What's the harm of letting her sleep with you? Dogs need their packs." Meanwhile, Laurie is resolving to do one thing, but often ends up doing the other.

I know I'll never settle that argument, whether the dog goes on the bed or not. But one final observation about the Coronavirus. I went to an art show on Saturday night. A couple of hundred people were crowded into a small lobby and three rooms. That in itself made me a little nervous. Several Coronavirus cases have been reported on our state of Pennsylvania. I could almost feel the germs hovering in the air.

We saw a friend of ours, one of the artists showing her work. I went to shake her hand. Instead, she offered her elbow. We did the elbow bump, the new way of greeting people in these contagious times.

Thanks, Tom. Just read Meryl Baer's post in "The Invisibles" and just about lost it while watching the hilarious scene from "Greece and Frankie." It's easy to recognize Meryl's frustration with the unconsciously rude behavior of people who just can't see seniors in front of them.

I liked Meryl Baer's post so much that I have added her to my blog roll. As for the virus, we still attend concerts, musicals and operas here in Hawaii, crossing our fingers that we won't get sick. Rather than shaking hands, why not use the Namaste?

Always read Meryl's posts and also watch Grace and Frankie. As for the alternative handshake, our doctor does the fist bump... but I agree with gigi that Namaste would be even better.
As for the dog dilemma, you know my opinion. I'm one of the 'softies' - let him sleep with you - unless there's a good reason not to.

Namaste ... perfect! Thank you gigi for the suggestion!

Yes, we in church have adopted the gentle elbow bump instead of shaking hands or hugging. Our pastor has a great sense of humor and he says do the elbow bump in a friendly way. I bought steps made for dogs so my small dog can get in my bed when he wants. He spends part of the night on a sofa and then part in my bed, by his choice.

Thank you so much for sharing all those bloggers, Tom. Our Zumba teacher now does fist bumps instead of high fives at the end of each session.

I'm getting into the "namaste" thing instead of an elbow bump. Makes me feel very mystic and new age!

Every time I think it can't get any better, it does. I love every one of these posts and how you put them together!

I did hear a doctor advise against the elbow bump as we have become trained to sneeze and cough into our elbows. Guess if we are careful of which one we use for each function. I tend to give fake hugs by spreading my arms wide but staying away. Guess my bad lungs and age have me paranoid.

It seems that my family is living on the front lines...when that reality hits close to home, it becomes a whole lot more concerning.

I am now blogging at Retire In Style Blog Too (http://www.retireinstyleblog too.com)

Do you boomers realize how universally hated you are? There is not one single demographic that does not hate you- white people, black people, asians, mexicans, indians, chinese, millennials, GenX, GenZ. Something tells me that you boomers are not going to have a very comfortable or easy retirement, especially once you end up in the retirement homes.

You are all going to end up in retirement homes and we all know that the elderly gets treated pretty badly in retirement homes. Well, that's what you get for ruining your own children's lives. Even if your children WANTED to take care of you, they couldn't, due to you boomers destroying the economy. So I hope you enjoy the retirement homes, boomer scum!

Wow! Nice post in front of mine. The guy must have Daddy anger issues. Loved all the posts and trying not to shake too many hands. The bump is a good idea.

While I somewhat sympathize with the fear, we have a country that has been put in a state of National Emergency over roughly 40 deaths... but nearly 12,000 people have died from our good ol' standard flue this season (so says the CDC).

In 2014, for the age of 70, there is already a 2.34 % chance across the board of dying within a year (SSA actuarial tables). This includes both healthy and those with existing conditions. I have to assume that those of us with existing conditions have a higher than average rate. I was unable to find a chart that identified 'healthy vs sick' but when you look at individual diseases it's clear they add significant risk. Even if the 10% of the over 70 number was accurate, a percentage of that would be overlap with those of us dying regardless.

Early reports for death rates are likely overblown. Since most of the population believes they only have the flue, only cases more likely to lead to death are being identified. Here is an excellent link:

The level of responsible reporting appears to be nearly zero at this stage. You cannot isolate a nation. Those of us who are fragile, need to self isolate, the rest of us need to recognize that this is an ugly flue and move on. I blame the media deep lack of understanding and desire for clickbait.

Oh, and that guy several posts above is ucky.

Hello, first of all i would like to thank you for this amazing information about Coronavirus. People really need this type of information nowadays. as we all know corona effect 150+ countries. I heard that corona spread from some sort of animals? Is it true? I read too many trivia's about an animal. but i didn't found the answer. can you please answer me?