From my perspective, there was at least one good thing about the inauguration: For whatever reason it left the Washington Beltway relatively free of traffic. I breezed through DC on Friday in record time . . . meaning, I was not held up by even one backup.

So here I am in Florida, joining the mass migration of Snowbirds leaving behind the sleet and snow of the North, in search of sun and sand in the South.

I must admit, I can't afford a five-star hotel, so I am residing for the week in a 1970s-era bungalow, complete with popcorn ceiling, linoleum floors and pockmarked aluminum doors and windows. However, this modest little complex is right on the beach, as you can see by this view of the seaside units. 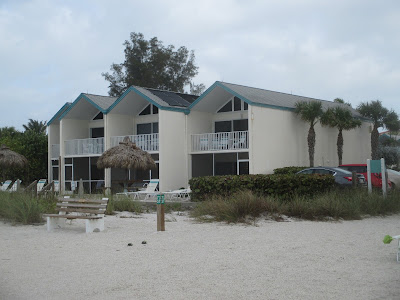 However, I booked my trip relatively late, and can't afford those pricier accommodations anyway, so instead of a view of the water, this is what I see out the back door through my patio. 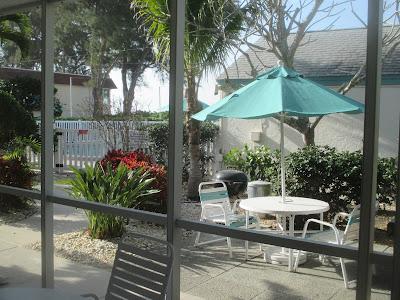 Still, I can feel the salty breezes from the Gulf of Mexico, and I'm only 20 yards from the beach. So the first thing I did this morning was take a walk along the shoreline. It sure beats slipping and sliding along the frozen sidewalks of Connecticut. 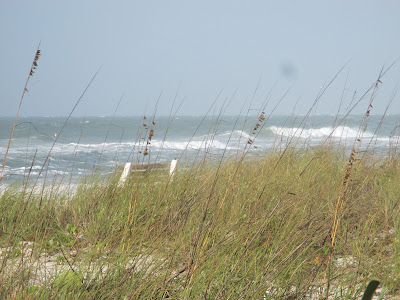 Several people have told me they don't think they'll be watching the TV news for the next four years. Honestly, I haven't watched much for the last year, since it got so ugly, from both sides. I don't think we should all opt out of public life just because we don't like what's going on. We should all stand up for what we believe in, and do the things that we think are important -- I'm still scheduled to tutor at my community college when I get back home in March -- and hopefully still act with some respect and civility toward those who don't agree with us.

But for now, at least, I will ignore the real world, and just soak up the sun.

From my perspective it was far worse on the one side...but we all do live in our bubble. I do not think one can make progress when a leader focuses on superficial issues that hurt his ego and spends time calling people names. I sure wish we had another adult in office.

Well, your photos look pleasant. Here in Hawaii, it is very windy and overcast.

It is good to have a nice retreat for a while. I am envious.

Sitting out on that patio looks pretty good to me, what's a little walk to the ocean! Wonderful.

I'm so glad you have this wonderful place to enjoy. A few yard to the beach sounds heavenly to me. i'm about a mile from our bay, but the rocky beach in wet and wind doesn't attract me. Your lovely Florida haven would be my choice, too. :-)

At least it's warm and not raining. It's been raining here in Northern Ca like forever. Plus snow, snow, snow. I don't know about how some many people can watch the same news or read and come away with totally different things. I mean the Women's march was amazing and an incredible show of support. But the Trumpers say get over it, he won. I honestly despair over how people come away with such ideas. If we didn't march for Civil rights, where would we be. ? If we didn't march against the war in Vietnam, where would we be.? If we didn't march for women's' rights where would we be? It's not about that Trump won, it's about the despicable way he won and even already the things he is doing. The latest press conference is an example of the PS laying into the media. Then Kellyanne Conway saying, on Meet the Press, he had 'alternative facts', MY GOD, people, get a brain. Sorry for the rant, it's just when I read some bloggers and other things that still support Trump even with THE FACTS, I loose it. All the news agencys can't be reporting 'fake news'.

I combined beautiful gulf side scenes and the women's march In Sarasota. I did not carry an anti-trump sign, but I am not going to sit silently and watch everything I believe in be taken from me either.

Nice winter place you're at!

I get most of my news from the internet, and it's hard to discern the real from the fake. I supported the women's march yesterday even though I watched from home. We are all in this together, for better or for worse.

Tom--Having lived in Florida for a couple of years, I cannot imagine anyone seeking sand. Oh, well, that white sand looks pretty. Good for you, going where you want to be. That motel may not be 5 star rated, but it looks plenty good to me. Enjoy!
Cop Car

It looks like a good place to unwind and relax. Enjoy.

Twenty yards from the beach sounds absolutely perfect! Enjoy your trip away. And thanks for your great words of advice!

Your new digs look absolutely wonderful! What a treat to be able to walk straight out from your condo and take a beach walk or go swimming whenever you want! I think I would choose to spend less on the accommodations (assuming they are adequate - and yours certainly look adequate!) and more on other pleasures. Relax and enjoy... the world will be waiting when you get back.

Yes, Tabor, we all do live in a bubble, and right now my bubble is the Florida beach. And ret. challenged, it's funny, but the world seems to get along just fine without me. Go figure!

Ahh! You are living one of my dreams! Enjoy your time on the Gulf Coast. Hope you are in the panhandle, that is (in my opinion) the prettiest of the FL beaches!

HEY! I am in that same bungalow, center unit second floor! I've been wearing a straw hat on the beach and sitting on the deck, just come over and say Hi.

Glad you're enjoying warmer weather. We've had what's considered cold weather -- above freezing -- and lots of rain in Souhern Calif . Am loving every bit of the rain, even hail one day. If we're lucky we'll get more rain thru Feb., our version of winter. We have all the rest of the year to bask in the sun. Maybe we can get out of the drought.

Love your posts - except one thing (political) OUR NEW PRESIDENT is a not your first choice, I get it - let's get off trashing OUR President. Yes, I support OUR President - good, bad or ugly - he's a great business person and will do well for all of us.

It has been the coldest, iciest and snowiest January in about 40 years in Washington state where I reside, we went to the Oregon coast it was 55 and lovely...The places there charge enormous for a bowl of chowder we go to a place that sells fish, clams, oysters, shrimp and crab! They make the best chowder we get it to go, cross the street to the safeway get a loaf of olive artisan bread, I always bring bowls and spoons and knives to enjoy our feast for a tiny amount of change and watch the waves and whales which are visible now..We stop at this teeny tiny bakery and get our marionberry Danish pastries early and enjoy them on the ride home, we go early and get home early, we cannot believe the coldness and rain and escape to either the Washington coast or the Oregon coast which has been warmer than where we reside! Enjoy the sunshine, beach, smell of the sea & relaxing tooooo!!!!!!!! We don't watch tv only pbs and our many dvd's and the radio is a 60's station!!!!!!!!!!!!!!!!!!!!

That looks like just my kind of hide away. Ever once in a while I like to try out a 5-Star but the smell of the salt water and breeze off the beach is all I really need.