We are blissfully ignoring the political news while we're on vacation. Last week when we were in Raleigh we spent an afternoon at the North Carolina Museum of Art. It's quite an impressive museum with works by Andrew Wyeth, Georgia O'Keeffe, Auguste Rodin, Henry Moore and others.

The museum itself is surrounded by a park with several miles of trails featuring dozens of sculptures and large art installations. They are very impressive. But as I ambled through the park I began to think: Sometimes it's hard to distinguish between the artworks and the more mundane, functional facilities on the grounds. They kind of look alike!

So what about you? Can you tell which of the following are photos of art, and which are pictures of the everyday facilities you might find at any park?

For example, is this a photo of a construction site, or a genuine piece of sculpture? 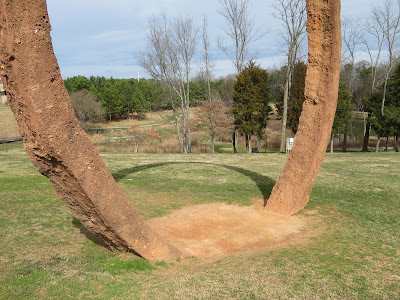 It is a piece of art called Gyre by Thomas Sayre. The work was created in 1999 as "concrete covered with iron oxide, reinforced with steel, mottled with dirt residue from earth casting." Okay, that one was easy. What about the simple, spare example below. Is it art, or not art? 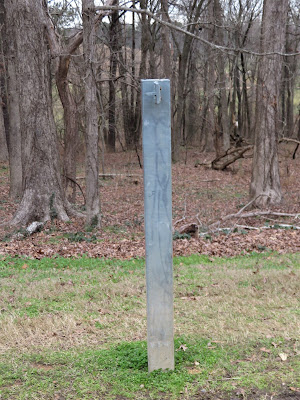 It's actually the side of a gate that closes off the footpath to vehicles. So it's not considered art. How about the next one. Do you know what it is? 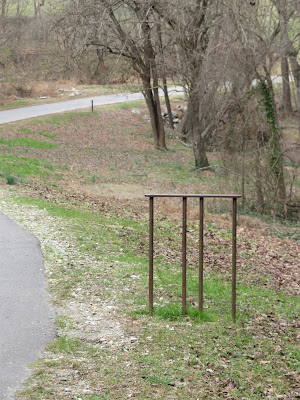 It is a work of art, a bicycle rack made in 2005 by Alvin Frega, with wrought iron and steel, as part of the museum's art-in-service collection. So if this is art, surely the next one must be a piece of art as well. Right? 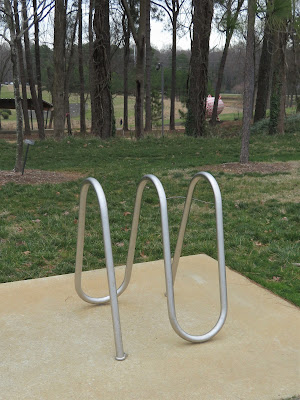 No, it's not art. This shiny modern installation is a non-artistic bike rack, made out of aluminum by some anonymous people in a factory. How about the pair below . . . artistic or functional? 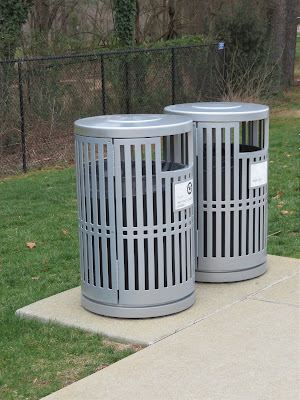 Functional. These are regular, usable trash cans, not typically categorized as works of art. So what about the photo below -- is it a retaining wall or a mega-sculpture? 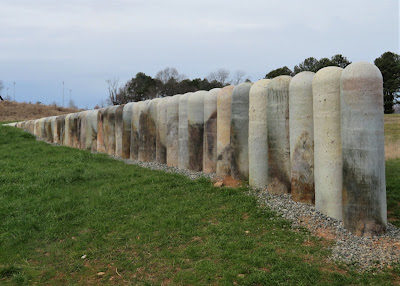 This is called Installation 1-183 by Daniel Johnston, a line of 183 ceramic columns that changes "familiar forms into unexpected and awe-inspiring experiences for the viewer." How about the next one. Could it possibly be an oil derrick, fracking away to power our automobiles? 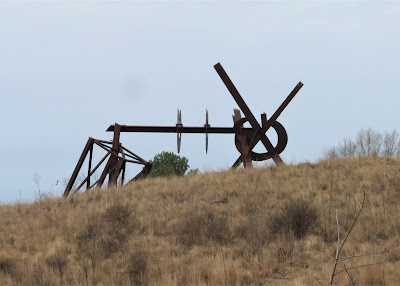 No. It is called No Fuss, a 32-foot-tall installation by artist Mark di Suvero. The next one is even taller. Does that make it art? 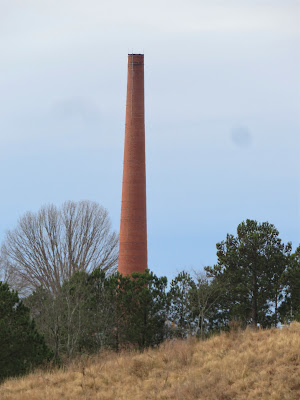 Nope. It's an ordinary smokestack -- apparently left over from the days when this was the site of a prison, and before that a military barracks. Next up: some things that look like street lights. What do you think. Are they street lights, or art? 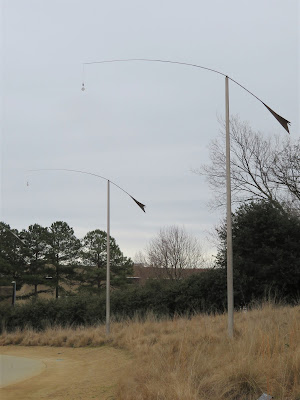 They are not street lights. They are called Flight Wind Reeds, by Bill and Mary Buchen. The picture below is a street light. 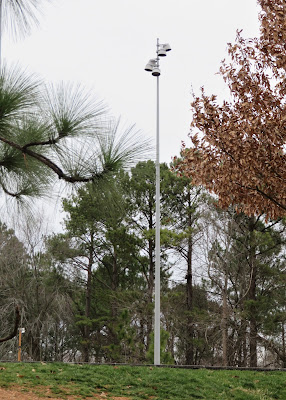 Finally, we have this. Is it a piece of  art, or a piece of equipment? 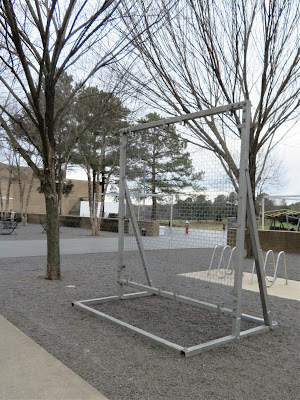 Honestly, we couldn't figure that out. What do you think?

Well, if you can't figure it out, then it must be art. LOL.

looks like some kind of goal stop to me for sports. I really enjoyed this post!! You captured the real diversity in how we view and like or hate art. I actually think the modern bike rack is a wonderful piece of art.

This is great food for thought, Tom. I got a good chuckle form gigi's comment above as well. I am willing to give conceptual art a place, but I think I draw the line at a banana duct taped to the wall.

Well I was fooled by the unfolded paperclip looking bike racks. Liked the flow and I'd have probably bought it so don't think I can guess on the last one.

That last one looks like where one might hang a kid's swing. But who knows? They are all quite interesting, art and function. :-)

Goal stop? Rack for kid's swing? Good guesses. Better than mine. I thought it might be a kind of climbing wall.

Duct tape a Popeye's Chicken sandwich to it and it's art.

As a texas queen that no fuss looks nothing like the derricks I pass in my drive. I was on target except for bike racks

I'm pleased that you enjoyed your visit to the NC Art Museum. I live about a mile from it and visit often. The park is a wonderful place to stroll or bike ride.

Trudi -- What a great place to live! I saw one Rodin. I saw the camera obscura on a cloudy day -- and it was still pretty amazing.

Maybe it is functional art. You can use it for something, but you don't have to.

Such a good post, Tom. In the eye of the beholder? My guess for the last picture - a trellis for something botanical?

Hi Tom! Looks like you are having an adventure while traveling AND utilizing your photography while doing it! I loved how you captured both the artistic and the "mundane" in such a way that shows that both can be seen in different ways depending on perspective. That might make an interesting series for the future???? But it still looks a bit chilly. I hope the weather is behaving for the remainder of time there. ~Kathy

Eye of the beholder surely. There is so much beauty in everyday items and good design is good design. I would hang some swings off the last picture. Adult swings are in short supply and why? We could become the installation swinging away in our elderhood reliving our toddler times.

Oh gracious! I got fooled several times too. I’ve been in art museums and sometimes wondered why it was considered art.

Hello Tom, I tune in to your blog every week or so. I'm 67, still working but thinking about the next phase daily. I enjoy reading about your retirement adventures. I've worked with Mark di Suvero for half my life. Under his hands-on direction our team builds huge steel sculptures, disassembles them and installs them mostly in public spaces around the world. Your sense of wonder and questioning is the best way to look at art. After a visit to a museum you see the world differently, as you should. Yes, art is everywhere. Sometimes you get it, or not. But remember understanding is not essential for appreciation and enjoyment. As a teacher I would urge students to turn their brains down and turn their eyes up. It doesn't matter if it's abstract or representational. Patient viewing is rewarded. No moral or ethical issues, just stylistic ones. Making art is a great thing to do for life. Vita brevis - ars longa.

What a waste of space for a blog. I go to numerous exhibits about mamamals, fish, birds and never want to present to others. Discovery for each person is different process and having to read the most recent one was for what ?